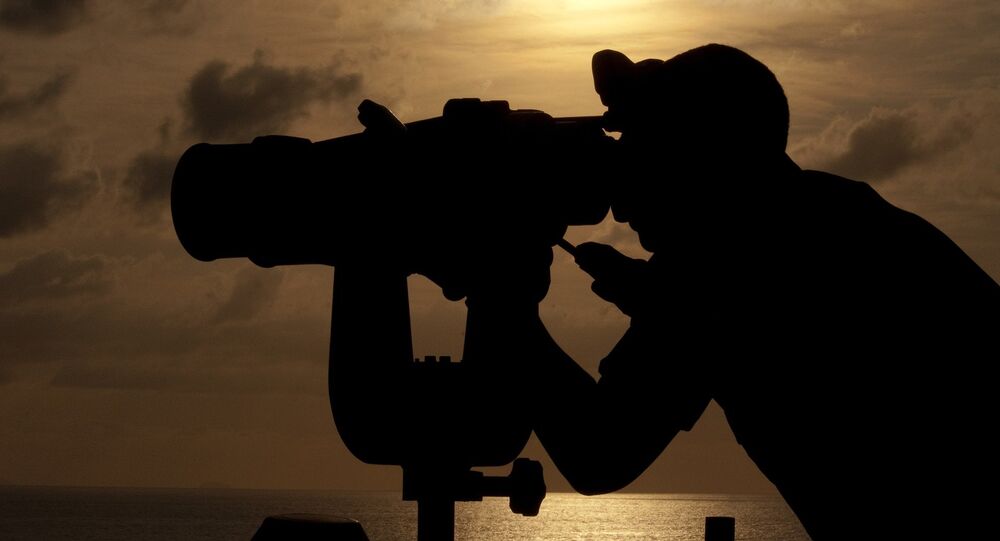 Russian Ship Spotted Near US Coast? What About Stream of US Ships Off Russia's?

US media reports that Russia's Viktor Leonov intelligence ship has again been spotted off the US coast, a month after it first caused a meltdown in the media. Speaking to Radio Sputnik, Russian military expert Vladimir Kozin pointed out that Moscow's actions are a normal reaction to similar activities off Russia's shores by the US and its allies.

On Wednesday, Fox News reported that the Viktor Leonov spy ship has been spotted in international waters about 37 km southeast of Georgia's Kings Bay Submarine Base. Fox's source in the US Navy emphasized that the ship did not enter US territorial waters, but had parked about 22 km off the coast.

© AP Photo / Desmond Boylan
Russian Spy Ship Detected Again in Int'l Waters Off US East Coast Near Kings Bay Naval Base - Reports
Last month, the Viktor Leonov was seen near a US submarine base in Connecticut, and then near the port city of Norfolk, Virginia. At that time, even though the Pentagon confirmed that the ship's activities did not violate any treaties, US media nearly lost its mind over the spy ship's presence, pointing to its impressive spying and monitoring capabilities, and to the complement of surface-to-air missiles onboard.

That story eventually blew over and the media moved on to other things. But now the Viktor Leonov is back, and so is the media hype, albeit with the volume toned down a couple of notches. The intelligence ship returned to the US coast after a stopover in Havana, Cuba last week, where the ship replenished on stocks of water, food, and fuel.

Asked to comment on the new round of hysteria raised by the US media about this mysterious Russian ship darting back and forth along the US East Coast, and what the ship is really doing there, Vladimir Kozin, a professor at the Moscow-based Academy of Military Sciences, said that the Viktor Leonov was carrying out routine work in international waters, and nothing more.

"The US and its NATO allies are always nervous when we conduct routine work in the seas and oceans using reconnaissance ships," Kozin noted. "Every decent maritime state has such ships by the way," he added. "Therefore, all this fuss is much ado about nothing. The ship was in international waters; this is standard practice."

© AFP 2021 / KIRILL KUDRYAVTSEV
What is Known So Far About New Russian Surface-to-Air Long-Range Guided Missile
Furthermore, Kozin stressed that in covering this story, "it should be borne in mind that the US stepped up their intelligence activities against Russia a long time ago, both through the use of reconnaissance ships, and their Air Force."

"Therefore, before worrying and wondering about what Russia is doing on the US coast, the Americans should take a look at themselves first, and remember what it is they're doing on our shores using similar means," the professor quipped.

In the end, so long as it doesn't violate any treaties, Viktor Leonov's presence off the US coast is an entirely appropriate response to the actions of the US and its allies near Russia, Kozin emphasized.

"In the continental United States, there are two large naval bases where subs armed with nuclear warhead-carrying ballistic missiles are based. These bases are located on both the Pacific and the Atlantic coast. The Viktor Leonov appeared not far from the base at Kings Bay. But this is normal activity by our side – we must know about the movements of US missile-carrying nuclear subs," the expert concluded.

'We Must Have Control of the Sea': Ex-NATO Chiefs Urge North Atlantic Build-Up