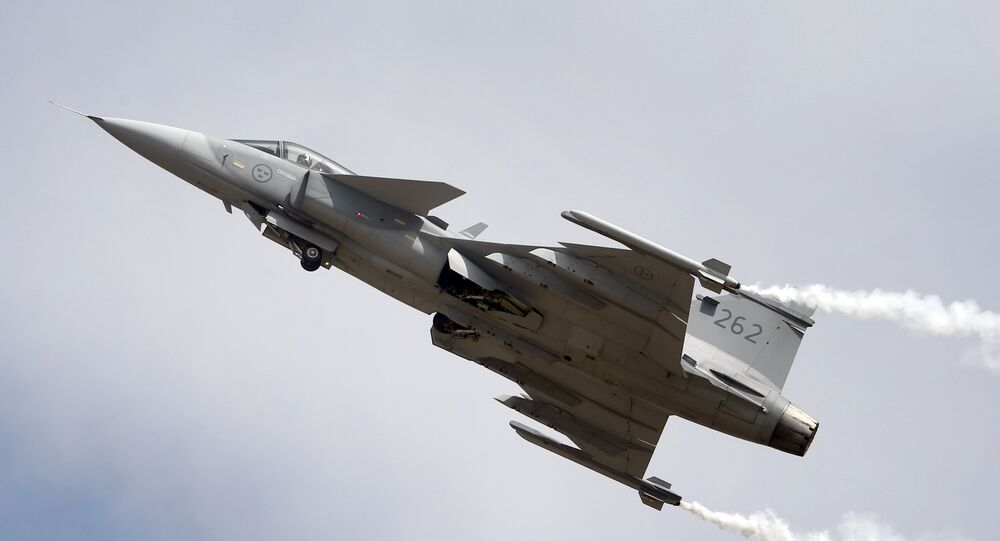 During his visit to Colombia, Swedish Industry Minister Mikael Damberg signed off on a defense cooperation agreement. Sweden's Saab is particularly enthusiastic about the agreement, which may help the troubled airplane manufacturer sell some of its vaunted Gripen fighter jets.

© AFP 2020 / FABRICE COFFRINI
Saab Woos India With Offer to Build Fighter Jet Factory in Exchange for Contract
According to Swedish Industry Minister Mikael Damberg, the Colombian Armed Forces are an integral part of the peaceful transition of a country scarred by a decade-long civil war, and may be making major investments in the future, the Swedish economic daily Dagens Industri reported.

Sweden's Saab, which previously experienced problems trying to market its Gripen fighter jets amid heavy competition from US, EU and Russian aircraft, is pinning its hopes on Colombia's future arms procurement. Saab has previously tried to woo the Colombian military by sending Swedish military pilots and holding seminars for the Colombian Air Force.

"We have begun to open talks with Colombia," Richard Smith said, as quoted by Swedish trade magazine Ny Teknik. In 2016, Smith identified Colombia as one of the potential buyers of the Gripen.

© AP Photo / Jeff Roberson
Saab Staking on Boeing's Trainer to Boost Gripen Sales
The sale of 36 new Gripen aircraft to Brazil meant a giant step forward for the Gripen project and was described as a "game changer" by Saab. During the seminar, a hopeful Smith ventured that the Gripen will "dominate the market" for single-seat multi-role aircraft.

The Gripen is currently in use in Sweden, the Czech Republic, Hungary, South Africa and Thailand. Saab is also hopeful for major deals with India and Finland, which are preparing for major air force updates with 150 and 40 jets respectively, and is also in discussion with Botswana. Previously, Saab's bids failed in Denmark, Norway, the Netherlands and Poland.

In Colombia, however, Saab's marketing efforts may prove to be a bad PR move for the Swedish giant. In late 2016, Colombia signed a peace agreement after years of difficult negotiations, which earned Colombian President Juan Manuel Santos the Nobel Peace Prize. The left-wing guerilla movement FARC agreed to demobilize, but has not yet handed over their arms, whereas the second-largest guerilla force ELN has just begun peace talks. In connection with this, human rights activists believe it is the wrong time for Sweden, which previously emerged as one of the driving forces for the peace agreement, to campaign for new arms deals.

​"Strengthening our arsenal is basically the worst thing we can do now. The military should be restrained, and the world should help us with that instead of trying to sell us arms," Colombian senator and human rights activist Iván Cepeda told Swedish Radio.

"The reality has evolved since then. The way I understand it, the authorities have given the preliminary green light to the export of this type of product," Mikael Damberg told Swedish Radio.

The Saab JAS 39 Gripen is a light single-engine multi-role fighter aircraft in the same class as the Eurofighter Typhoon by Airbus, the Rafale by Dassault and the Joint Strike Fighter by Lockheed Martin.