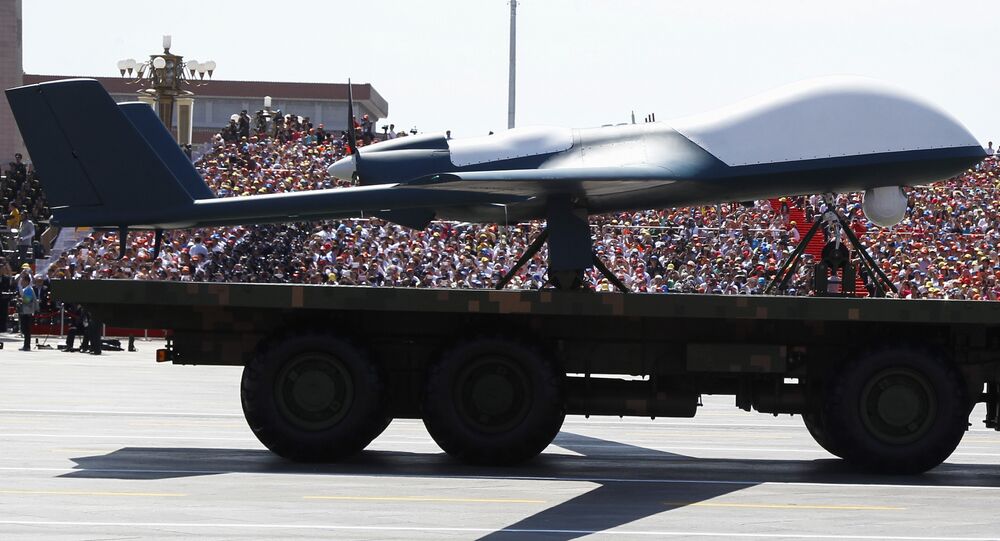 The China Aerospace Science and Industry Corporation (CASIC) appears to be developing a stealthy long-range drone which will "drastically increase" capabilities of the People's Liberation Army in the Pacific, Russian defense analyst Vasily Kashin told Sputnik.

When it comes to drones, CASIC has mainly been known as the company behind the WJ series unmanned aerial vehicles (UAVs). Kashin described them as "rather basic systems" manufactured by the company's department specializing in the development and construction of cruise missiles.

The WJ-series drones "essentially resemble reusable cruise missiles outfitted with reconnaissance equipment instead of warheads. They can be used for assigning targets, making adjustments and assessing the outcome of the strikes. They could also be used as aerial targets during missile defense drills. Some types could be equipped with warheads and carry out combat tasks," he detailed.

© AFP 2020 / ANDY WONG / POOL
India Dwarfed by China’s Unmanned Warfare Capabilities
The new stealthy long-range UAVs will likely be more complex, but China, according to Kashin, has the technological base necessary to produce them. Approximately a year ago, Beijing unveiled its first stealth combat drone, known as Lijian. The UAV is said to look much like the US-made Lockheed Martin RQ-170 Sentinel.

A stealthy reconnaissance drone "could drastically expand the capabilities of the People's Liberation Army when it comes to conducting combat activities in the Pacific theater. The Chinese have counted on anti-ship ballistic and cruise missiles when it comes to countering the United States. Reliable target assignment is the key challenge for these systems. China has tried to solve this issue by developing space means for maritime reconnaissance. However, space systems are vulnerable and have other limitations. A stealthy long-range drone could be an ideal solution," he explained.

The defense analyst further mentioned that such drones could be used to detect and track naval groups while remaining unnoticed by the planes deployed to the aircraft carrier.

Last week, CASIC Deputy General Manager Wei Yiyin announced that the company was focused on developing what China Daily referred to as "a long-endurance stealth drone and a near-space drone."

"As military reforms are drastically changing armed forces around the world, drones have become an indispensable weapon in modern warfare because they can play an important role in high-resolution reconnaissance, long-distance precision strikes, anti-submarine operations and aerial combat," the newspaper quoted Wei as saying.