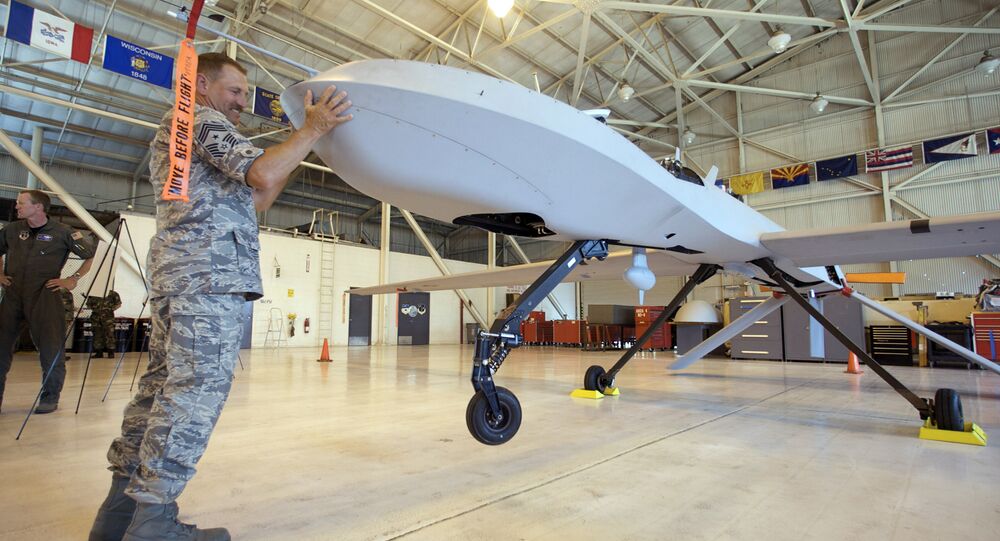 The United States Air Force has announced it has more jobs available for drone pilots than for any other type of aircraft, and the number of vacancies will expand significantly to support the USAF's new wave of craft - effectively stifling the hopes of campaigners who wish to see an end to the US military's brutal drone program.

According to official data, only around two in every 100 US citizens who train to become pilots actually end up flying the skies for a living.

A number of reasons for this vastly asymmetrical ratio have been suggested, the most common poor remuneration (some American pilots earn as little as US$20 per hour) and/or a lack of vacancies.

© AP Photo / Aijaz Rahi
US Air Forces F-16 demonstration team pilot, Ryan Worrell from Iowa, walks past the F-16, a fighter aircraft, on display on the fourth day of the Aero India 2013 at Yelahanka air base in Bangalore, India, Saturday, Feb. 9, 2013

However, in one aviation sector, neither pay nor opportunity is seemingly an issue. Military drones —   officially dubbed Remote-Piloted Aircraft (RPA) — are a booming industry, to quite such a degree that the US Department of Defense is struggling to fill every available opening.

Speaking at an Air Force conference, Lieutenant General Darryl Roberson revealed the USAF employs more pilots for MQ-1 Predator and MQ-9 Reaper drones than any other aircraft. In all, over 1,000 pilots are employed in manning the two craft, compared to the 889 who man the C-17 Globemaster III (the USAF's primary strategic lift aircraft, used for global transport of troops and equipment) and 803 who fly the F-16 Fighting Falcon (the mainstay of the USAF combat fleet).

Lt. Gen. Roberson added the USAF was scheduled to retire the Predator, and increase the number of Reapers in the skies, meaning the Force must bring on ever-more drone operators. The proposed growth of drone warfare is but a further supplement to the massive expansion of US drone combat under former President Barack Obama — in all, his administration ordered 10 times as many attacks as his predecessor George W. Bush, dragging the number of strikes to 500.

While public pronouncements on the use of drones by President Donald Trump have been scant, he appears quicker to green light attacks than his predecessor — US drones hit Yemen on more occasions in one week in early March than they did in an entire year under Obama. Moreover, Trump has granted the Central Intelligence Agency power to conduct drone strikes of its own against militants — a major shift from Obama administration policy, which sought to limit the CIA's ability to engage in paramilitary activity.

"We produced 1,108 graduates from our pilot training program last year, 1,200 this year. We're on our way up to producing 1,400 with assets in the US Air Force. Even that's not going to be enough to meet our requirements. We've got a big problem overall to address — we're short on pilots. We're as low as we could be. We're looking at expanding the number of pilot training bases to get after that shortage," he concluded.

The Lieutenant General neglected to speculate on the cause of the drone pilot paucity, but public perspectives on the usage of drones may account for the scarcity of willing recruits — polls have consistently indicated opposition to drone warfare is widespread, in both the US and allied countries.

© REUTERS / Toby Melville
US pilots pose for a photograph in front of US F-22 Raptor fighters parked on the runway at Mihail Kogalniceanu air base in Romania April 25, 2016.

The publicized experiences of former drone pilots may account for this lack of enthusiasm — former USAF employee Brandon Bryant previously told Sputnik his time as a drone pilot was extremely dehumanizing — as might serious questions over the legality of the drone program, and lawsuits brought by relatives of innocent civilians killed in drone strikes.

Former State Department officials have acknowledged that the program is inimical to fighting terror, with civilian casualties and destruction in fact helping fuel support for and recruitment to al-Qaeda and Daesh in the regions it operates.

The Death Drones: People Working as UAV Operators 'Cease to Be Humans'