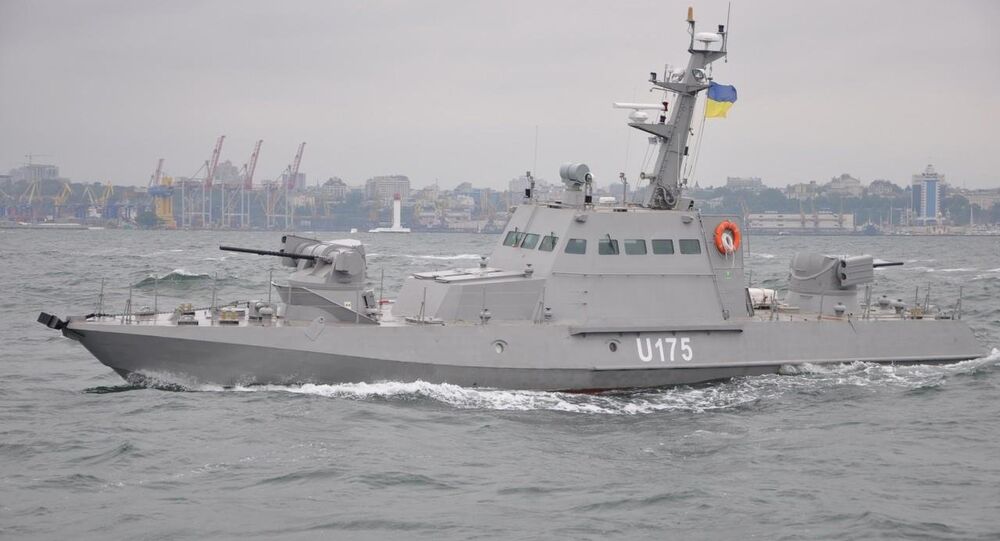 The Defense Ministry of the self-proclaimed Donetsk People's Republic has announced that it has taken the necessary measures to shore up coastal defenses following an attack on militia positions by Ukrainian Navy patrol boats this past weekend. Observers warn that the attacks could become a regular occurrence, based on a new naval strategy by Kiev.

On Sunday, DPR media reported that the Ukrainian Navy had conducted an attack near the front line along the coast of the self-proclaimed republic in the Sea of Azov, using two small vessels based in the Kiev-controlled coastal city of Mariupol.

DPR People's Militia deputy head Eduard Basurin said that Navy gunboats had opened fire on militia positions with small-bore weapons and large-caliber machineguns, violating the ceasefire, and that the militia were forced to return fire, leading both Ukrainian boats to promptly leave the area.

A day later, a spokesperson from the DPR's Defense Ministry told Russian news agency RIA Novosti that militia "have taken appropriate measures, and are now prepared for these kinds of provocations from the sea" in the future.

© AP Photo / Cliff Owen
Ukraine Urges US Senate to Approve Funds for Security Aid to Kiev
The probing attack over the weekend was the first of its kind in over two years. The last major engagement involving the Ukrainian Navy in the country's civil war took place over two years ago.

But the attack wasn't the first by the Ukrainian military in recent weeks. Last month, Ukrainian forces attempted to break through local militia positions along the coast of the Azov Sea. Ukrainian forces suffered heavy losses with 15 men reported killed, and 20 more wounded.

Observers warn that the attacks on coastal areas of the breakaway territories may intensify as the Ukrainian Navy makes progress on the creation of its 'mosquito fleet', which is expected to consist of about 30 modern or modernized small- and medium-sized boats and patrol craft by the end of the decade. Ukrainian Navy deputy chief Andriy Ryzhenko announced the 'mosquito fleet' initiative last October, moving away from the traditional sea- and ocean-going naval concept.

© Sputnik / Sergey Averin
Some 2.5 Million Refugees Arrive in Russia Since Escalation of Donbass Conflict - Lawmaker
In what may be a related story, Ukrainian Navy commander Ihor Voronchenko announced last week that Ukraine was negotiating the purchase of decommissioned NATO vessels, including minesweepers, to try to reinforce Ukraine's Black Sea presence.

Kiev's active buildup and testing of its 'mosquito fleet' follows on the decline and near-collapse of Ukraine's traditional fleet in 2014. Following the February 2014 Maidan coup and the Crimean peninsula's referendum to return to Russia, the size of Ukraine's Navy was cut in half, dropping from about 15,000 to 6,500 men, with many officers, including vice admirals and rear admirals, as well as able seamen, resigning and volunteering to join the Russian Black Sea Fleet instead. The center of the Navy's operations was subsequently moved from Crimea to Odessa in the northwestern Black Sea.

© AFP 2021 / THOMAS KIENZLE
Dead End: 'Implementation of Minsk Agreements Will Lead to Poroshenko's Ouster'
Together with several dozen small patrol boats, minesweepers, command, recon and support ships, Ukraine's Navy presently has one frigate – the Hetman Sahaydachniy, one corvette, and one landing cutter, something most local military observers say is insufficient for it to conduct amphibious assaults against Donbass militia positions along the coast, particularly given that most of the vessels are believed to be in a state of disrepair.

The 'mosquito fleet' could come to support a broader offensive, however, an eventuality that does seem like a terrifying possibility as Kiev continues to stall the implementation of the Minsk agreements on Ukrainian peace.

Some 2.5 Million Refugees Arrive in Russia Since Escalation of Donbass Conflict