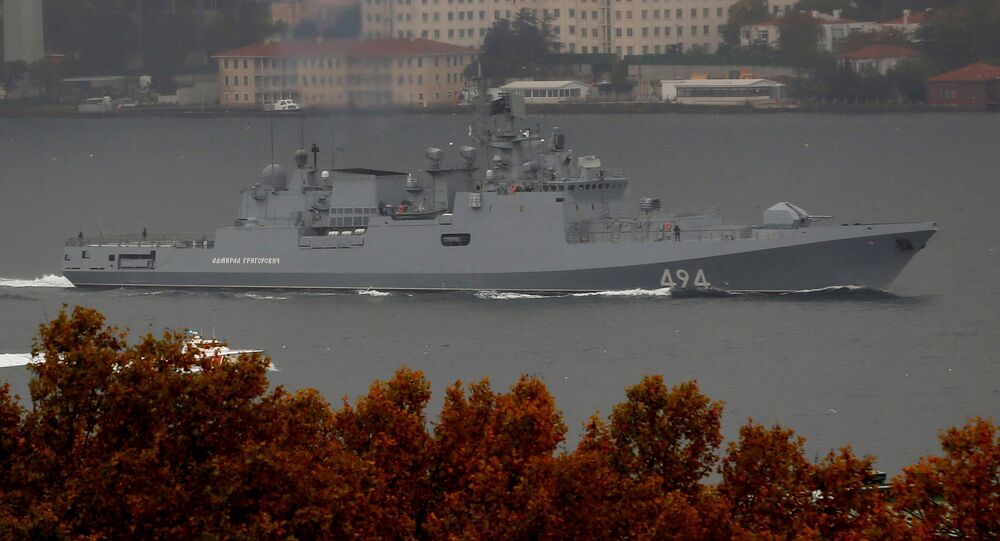 Back to Syrian Shores: Why Russian Cutting Edge Frigate Returns to Mediterranean

Commenting on the recent departure of Russia's cutting-edge frigate the Admiral Grigorovich from Russia's Black Sea port of Sevastopol on its long-distance mission to the Mediterranean, Russian military commentator Viktor Baranets told Radio Sputnik what the military vessel will be doing off the Syrian coast.

On Monday, Russia's Defense Ministry announced that the Russian Black Sea Fleet’s advanced frigate Admiral Grigorovich set off for its long-distance voyage to the Mediterranean Sea.

"Under the plan of combat training, the cutting-edge frigate Admiral Grigorovich has left Sevastopol and set a course for the Black Sea straits, connecting the Black Sea with the Mediterranean Sea," Russian Navy Captain 1st-Class Vyacheslav Trukhachyov said on Monday.

"The military vessel, under the command of Captain 3rd-Class Anatoly Velichko, has embarked on its third long-distance mission," Trukhachyov added, since first being commissioned on March 16, 2016.

The mission objective of the Admiral Grigorovich will be to join and "carry out tasks as part of the Russian Navy’s permanent task force in the Mediterranean," Trukhachyov said. The commander however did not specify the exact role the frigate would play in Syrian operations.

A source in the law enforcement agencies of the Crimea Peninsular has confirmed to Sputnik that the frigate was expected to pass through the Bosphorus Strait on Tuesday morning and to reach the Russian Navy's task force in the Mediterranean by the end of Tuesday.

"In the first half of the day the frigate is expected to go through the Straits and by Tuesday evening it is expected to operate as part of the Russian Navy’s permanent task force in the Mediterranean. The vessel's crew is well-prepared, the vessel has undergone all the necessary standing orders and is ready to implement in full all the tasks in hand in the distant maritime zone," the source told Sputnik.

"The frigate will perform its patrol duties, it will be the chief guard of our naval group in the Mediterranean," he told Sputnik.

The vessel will continue carrying out the military objective of land strike warfare, the military commentator said. He did not rule out that there would be strikes on the jihadists' positions near Palmyra. He especially stressed that the strikes will not be on the positions within the city limits, but solely outside the city.

"Our servicemen do their utmost to ensure that not only missiles or bombs, but also shrapnel does not reach Palmyra," he told Sputnik.
Baranets further suggested that the Admiral Grigorovich will have a "serious operational payload," especially given that the military conflict is entering a new stage: the Syrian troops have already advanced towards Palmyra and it is going to be a serious fight with the terrorists over the city.

The frigate therefore is going to attack the terrorists around the city from the Mediterranean powerfully and precisely, as Russia's unmanned aviation and reconnaissance aircraft carefully align the targets with the Syrian General Staff also providing Russian servicemen with their reconnaissance data.

© Sputnik / Russian Defense Ministry
Russian Admiral Grigorovich Frigate Targets Terrorists in Syria With Kalibr Missiles (VIDEO)
The frequency of Russia's missile strikes will only increase with the arrival of the frigate. It is not a simple mission for the vessel but a tough examination of all of its weapon systems, he concluded.