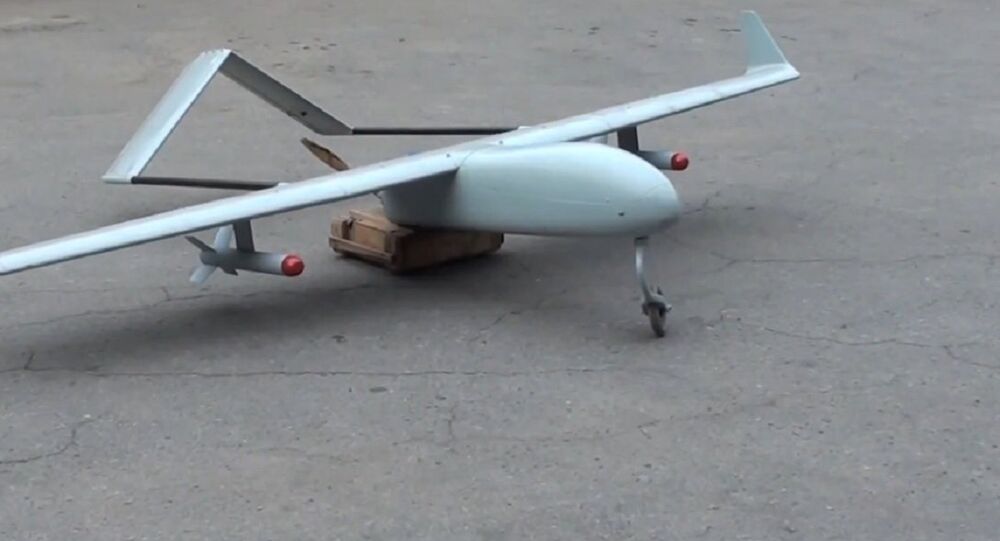 As modern armies increasingly rely on unmanned aerial vehicles, the Ukrainian Army is resorting to some unusual measures as it tries to keep up to date.

© Flickr / Dysanovic
US Air Force Narrows Field For Enlisted Drone Pilots
Unmanned aerial vehicles, or drones, have become a crucial part of all contemporary armies around the world. Relatively small and capable of staying in the air for a long time while providing a real-time video feed straight from the front lines, these high-tech machines are a gift to generals.

However, after Ukraine ended up in a civil war with the people of Donetsk and Lugansk, it suddenly found itself in a very uncomfortable position, as procuring just four or five US-made RQ-4B Global Hawk drones at $130 million apiece would completely drain its military procurement budget of about $500 million. A report by Popular Mechanics explains how the Ukrainian military has tried to find a way around their budget constraints.

By 2014, when the civil war started, the only drone the Ukraine had was a Soviet-made Tu-143 Reys unmanned aircraft. The state of the art back in 1970, the Reys (Russian for "flight") is more of a very smart cruise missile. Launched from an enormous tube container mounted atop a heavy-duty truck, it required a 700 by 700 meter landing zone. Some of them even had television cameras, but most relied on old-school film photographs that required development after landing. The Russian Army still occasionally uses these devices for target practice. Unfortunately for the Ukrainians, the Donbass militia had no trouble grounding these relics.

​This forced the Ukrainian military leadership to resort to commercial drones, like the DJI Phantom. However, according to Popular Mechanics, procuring these machines via conventional Ukrainian military procurement mechanisms was hardly an option.

"To sidestep the corrupt and bureaucratic procurement process, crowdfunding initiatives like The People's Project solicited donations for hardware including consumer drones for military use," the report explains.

In an attempt to find a solution, the Ukrainian startup company UKRSPECSYSTEMS began making their own drones out of commercial components, also relying on crowdfunding. Their first model, the PD-1 or "People's Drone — 1" (yes, they really named their drones in English), was something of a step forward, with its six-hour flight capability.

People's Drone 1 from the Ukraine. Looks like a Penguin #UAV. #drones https://t.co/O2bJF2gw9d pic.twitter.com/3te7eonFHA

​But by that time, the Ukrainian military was riddled with all kinds of privately developed drones, coming from the most unexpected sources — like the Spectator, designed by students from the Kiev Polytechnic Institute. According to the official Ukrainian Defense Ministry website, some 30 different models were used at that time.

Eventually, the US finally realized Ukraine needed drones, and it shipped about 70 RQ-11 Raven drones, the whole batch being worth about $12 million, not quite as deadly a punch to the procurement budget. However, the drones that performed well against AK-47-yielding terrorists in Afghanistan and Iraq were easily grounded by jammers. Since then, the remains of that batch has been gathering dust in storage, Popular Mechanics says.

© Sputnik / Vitaliy Belousov
'Deadlock': Donbass Blockade Risks Plunging Ukraine into Energy Collapse
The Ukrainians remained without strike drones, so the military turned to the legendary Antonov design bureau, which designed some of the biggest transport planes in the world, including the monstrous An-225 Mriya that was to carry Buran, the Soviet version of the Space Shuttle, for an atmospheric launch. True to their heritage, the Antonov bureau presented a prototype drone AN-BK-1 Horlytsia ("turtle dove"), the biggest Ukrainian-made drone, in 2016. Unfortunately, the Turtle Dove has still not joined the Ukrainian Armed Forces arsenal. With luck, we'll see the Antonov drone produced en masse later this year, according to the report. The armament of the Turtle Dove is yet undisclosed, but it is likely it will carry missiles.

So far, Ukraine's military has been relying on kamikaze drones. In 2016, a Yatagan-2 drone was presented by a company called New Energy of Ukraine. The drone, whose name translates as "scimitar," is a crude-looking plane capable of flying for 12 minutes and delivering 1 kg of explosives 3 kilometers away. By comparison, the Israeli IAI Harop suicide drone has a range of 1,000 km and can fly for up to 6 hours, delivering a 23 kg explosive charge. Harop's cost is undisclosed, but lies somewhere at "tens of thousands of dollars," while Scimitar costs $5,000.

​At this rate of development, perhaps it isn't naïve to expect the war to end before these Ukraine homemade machines see action.