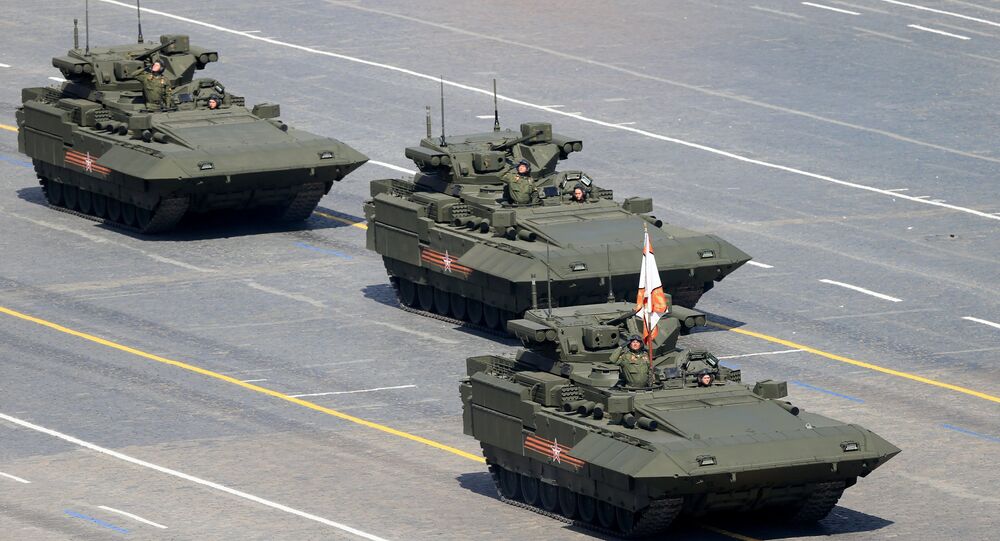 On Monday, Tekhmash, the company developing shells for the Armata T-15 and Kurganets-25 infantry fighting vehicles, announced that all-new smart munitions will be delivered by next year.

Speaking to RIA Novosti on the sidelines of the IDEX-2017 defense exhibition in the UAE on Monday, Tekhmash director Sergei Rusakov said that smart ammunition for the T-15 heavy IFV, and the Armata platform-based Kurganets-25 IFV, will be delivered in 2018, the same year that mass production of the T-14 main battle tank is expected to begin.

Tekhmash is now engaged in preparatory work on the integration of the smart munitions technology into heavy armored vehicles, Rusakov explained, and is doing so with the help of JSC Pribor, a Moscow-headquartered defense concern engaged in the production of automatic guns, ammunition and other military products. "Given the significant amount of work involved in the preparation and carrying out of state tests, adopting these munitions may not occur before 2018," the official said.

© Photo : Russian Defense Ministry
The T-15 heavy infantry combat vehicle and the T-14 tank, both based on the Armata Universal Combat Platform

Tekhmash had earlier announced the start of preliminary testing of new artillery rounds equipped with an intelligent system of remote detonation. Once development is complete, the prospective rounds will be used on the 57mm Au-220M Baikal remotely operated unmanned turret, which can be installed aboard the Bumerang amphibious armored personnel carrier, the Armata T-15, and the Kurganets-25 family of IFVs.

The Armata modular combat platform, first introduced in 2015, has several variants, including the flagship T-14 next-generation main battle tank, the T-15 heavy infantry fighting vehicle, the 2S35 Koalitsiya-SV self-propelled gun, and the Kurganets-25 IFV, as well as a series of AFVs, engineering and recovery vehicles.

Earlier this month, Uralvagonzavod, makers of Russia's the T-14, announced that mass production of the tank would begin next year.

Host photo agency
Kurganets-25 armored personnel carriers with medium-category caterpillar chassis at the military parade to mark the 71st anniversary of Victory in the 1941-1945 Great Patriotic War, May 9, 2016

On Sunday, Russian Deputy Prime Minister said that the T-14 Armata was superior in its technical characteristics to its US, Israeli and European counterparts, giving Russia a prospective advantage in tank warfare.