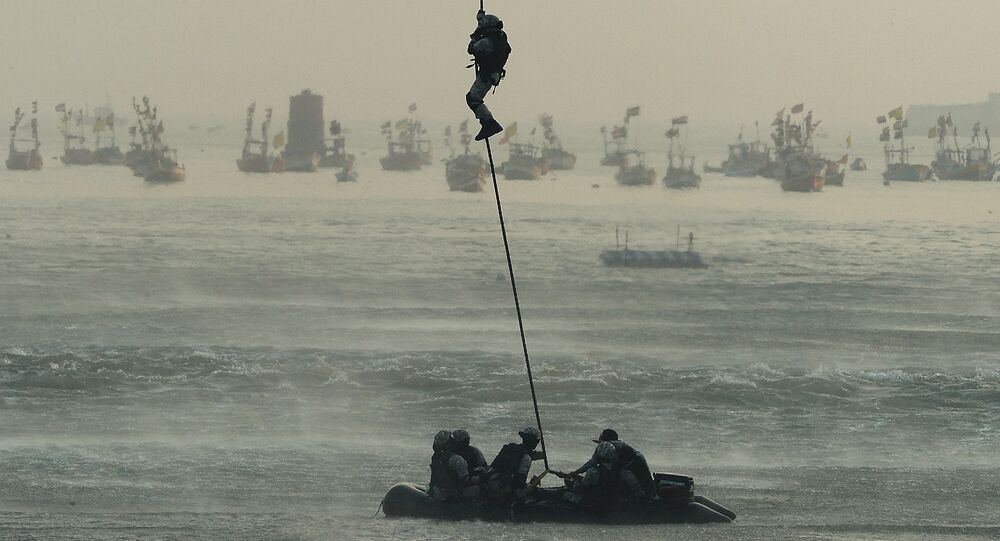 © Flickr / COMSEVENTHFLT
US Navy Selects Indian Shipyard to Repair Its Vessels Operating in Indian Ocean
New Delhi (Sputnik)- In a bid to augment the capability to conduct special operation in harbor and at sea, Indian Navy has started the process to procure Special Operation Rigid Hull Inflatable Boats (SORs) from global manufacturers. This is part of India's long desired capability to build an independent amphibious group modelled on US Marines. In a 10 pages request for information, Indian Navy has asked global manufacturers to send details of Rigid Hull Inflatable Boats that are capable to perform independent operations of long range without the need of a surface/ sub-surface or air platform. Navy requires 10 such boats capable of carrying 12 personnel including mission and craft crew or minimum payload of up to 2200 kilogram excluding fuel. Boat should have endurance of 400 Nautical at 50 knot top speed.

"Craft should be fitted with Very High Frequency/High Frequency/SATCOM suites, High Definition Warning Set radar, ECDIS, Echo sounder and other essential navigation and communication equipment. Forward and aft mounts for the fitment of 12.7 mm caliber weapons and suitable firing positions for short tripod launched heavy weapons and such as self-homing projectiles up to 50 kg, auto Grenade Launchers, etc.," says Indian Navy document. To assist in reducing the shock during heavy sea, Indian Navy prefers carbon fiber layered Hull with a foam core and should have an outer layer of Kevlar for additional support.

To enhance the amphibious capability, Indian Navy will also soon open commercial bids for procuring new Landing Platform Docks (LPD) amphibious warships. The four ships costs will cost approximately $ 3.7 billion and should be delivered to Indian Navy in the next 10 years.

Currently, India's amphibious warfare capability consists of nine older tank landing ships of various sizes and capabilities. The Shardul class ships are latest ones which are hybrids of LST and LSD design. They are an evolution of the Magar class amphibious landing ships. Shardul and Magar class can carry 10 armored vehicles, 11 armored personnel carriers and more than 500 troops.