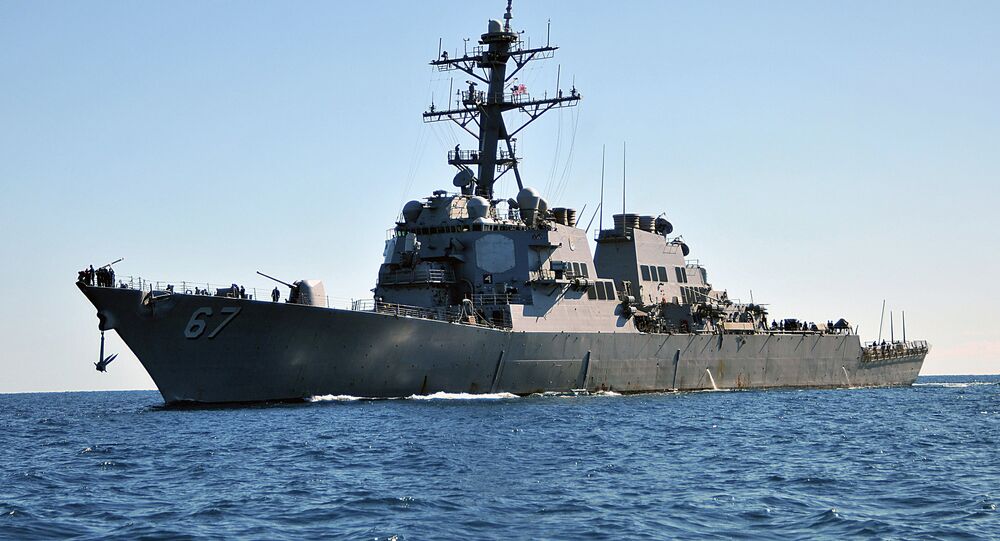 The US Navy has decided to deploy two more Arleigh-Burke class destroyers in the Red Sea in order to fend off attacks from Yemeni Houthi rebels.

YouTube/Arab News
Saudi Frigate Attacked by Houthis Returns to Base
The US Navy is deploying the USS Laboon and the USS Truxtun to supplement the naval group that is already located in the sea between Africa and Arabian peninsula.

This decision comes about two weeks after the US dispatched another Arleigh-Burke destroyer, the USS Cole, to Bab al-Mandab Strait, the entrance to the Red Sea from the Gulf of Aden, which became notorious after Somali pirate attacks in 2008.

The Pentagon currently refuses to confirm or deny the decision. The only comment comes from Christopher Sherwood, a Defense Department spokesman, who said that "the US Navy maintains a continuous combat-ready force within the Arabian Gulf, Gulf of Oman, Arabian Sea, Gulf of Aden, and Red Sea to protect the free-flow of commerce, reassure our allies and partners and deter acts of aggression against our forces and our partners."

The decision to move more ships to the Gulf of Aden came after an attack by a Houthi suicide bomb that killed two sailors on the Saudi Navy's frigate Al Madinah, the lead ship of it's French-built Al-Madinah-class.

According to Defense News, the waters of Gulf of Aden are quite familiar to the USS Cole's crew. In 2000, it was attacked by an al-Qaeda suicide boat, which killed 17 sailors, injured 39 and almost sank the ship. This is believed to be the deadliest terrorist attack on US military vessel.

Earlier in October, Houthi rebels conducted a missile strike against US Navy ships. One of the missiles was destroyed by fire from USS Mason destroyer, while another missile missed completely. The attack was followed by a retaliation cruise missile strike which destroyed ground-based radars in Houthi-controlled territory.

According to news reports, the Saudi-led coalition began an offensive on January to drive the Houthis from the coast. As the rebels fled, they reportedly mined harbors with sea mines and shore facilities with land mines, which has raised concerns among Navy brass about "freedom of navigation" in the Gulf of Aden.

The Gulf is already filled with ships, both commercial and military. The Red Sea is the main route from the Mediterranean to Indian Ocean. The European Union, Russia and China conducts military patrols against pirates there, with China building its own naval base in Djibouti to support the operations. The US already have the USS Makin Island, a Wasp-class amphibious assault ship, and the USS Comstock, a Whidbey Island-class dock landing ship, carrying US Marines of the 11th Marine Expeditionary Unit.