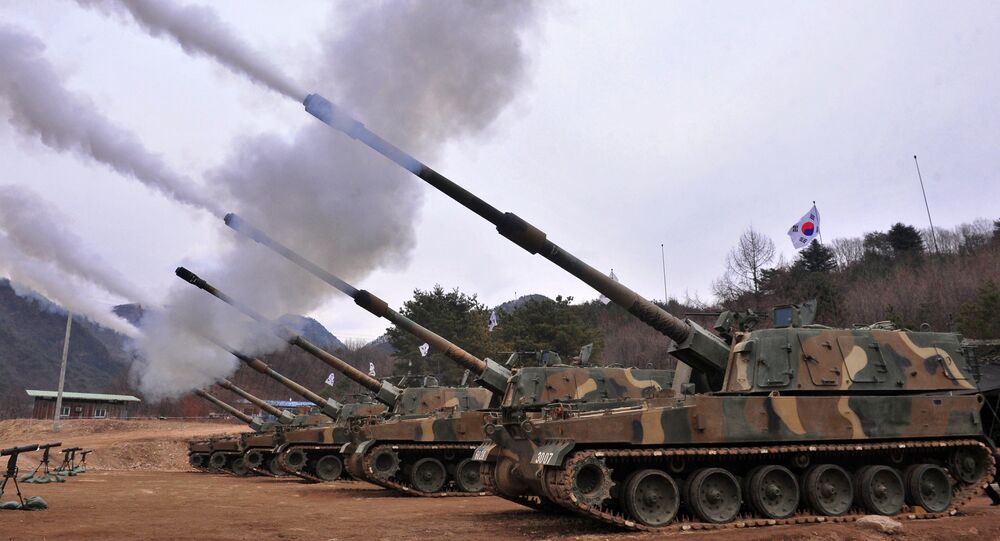 Amid the growing fears of Russia, which are spreading across Europe like an avalanche, the Estonian Defense Ministry has decided to join its Finnish counterpart in procuring second-hand South Korean howitzers in self-defense.

© Photo : Wheelie A'barrow/MOD
Finland, Sweden Invited to UK-Led Expeditionary Force, Creep Closer to NATO
Under the plan, the howitzers will be delivered to the both countries' armed forces by 2021. Estonian Defense bosses said the country wants to purchase at least 12 howitzers. So far, there has been no official announcement on how many howitzers Finland is poised to acquire, but it is naturally expected to surpass Estonia's shopping basket.

According to estimates by Finnish national broadcaster Yle, Finland is expected to spend at least 100 million euros ($107mln) in the joint arms deal. Yle also suggested that 48 howitzers will be bought.

The Finnish Armed Forces have been working on a major procurement of self-propelled howitzer artillery in order to replace currently-used Soviet-built cannons for some years now.

© Flickr / alisdair
Stockholm's Bear in the Woods: Park Rangers Asked to Patrol Swedish Forests for Spies
At the end of last year, the army tested the South Korean-manufactured K9 Thunder howitzer at Rovajärvi firing range. The K9 Thunder is a 155-millimeter armored howitzer with a firing range of about 40 kilometers and a maximum speed of nearly 70 kilometers an hour. Estonian Defense Minister Margus Tsahkna said the new weapons will significantly increase the artillery and maneuver capabilities of the country's land forces.

The military procurements have been markedly stepped up in Nordic and Baltic countries citing Russia's "aggressive behavior," since Crimea's historic re-unification with Russia in 2014 was painted as Russian "belligerence" in mainstream media.

In January, Estonian Defense Minister Margus Tsahkna visited Finland during his first official visit abroad, where he met with his Finnish counterpart Jussi Niinistö and visited the headquarters of the Finnish Armed Forces. After exchanging thoughts on bilateral and Nordic-Baltic defense cooperation, as well as cooperation with the EU and NATO, a bilateral defense cooperation agreement was signed. Remarkably, Tsahkna also ventured that Finland and Estonia were on the eastern edge of the democratic world and called for closer teamwork. As a result, the two countries also agreed to exchange information on Russia, Yle reported.

© Photo : press-service of JSC PO Sevmas
Norway Arms Itself to Deflect Difficult-to-Detect Russian Subs
In recent years, Finland has also bolstered its defense cooperation with Sweden against the backdrop of anti-Russian paranoia. For many Finnish and Swedish military officials and politicians, including Swedish Defense Minister Peter Hultqvist, bilateral cooperation between the two non-aligned Nordic nations is a preferable alternative to joining NATO.