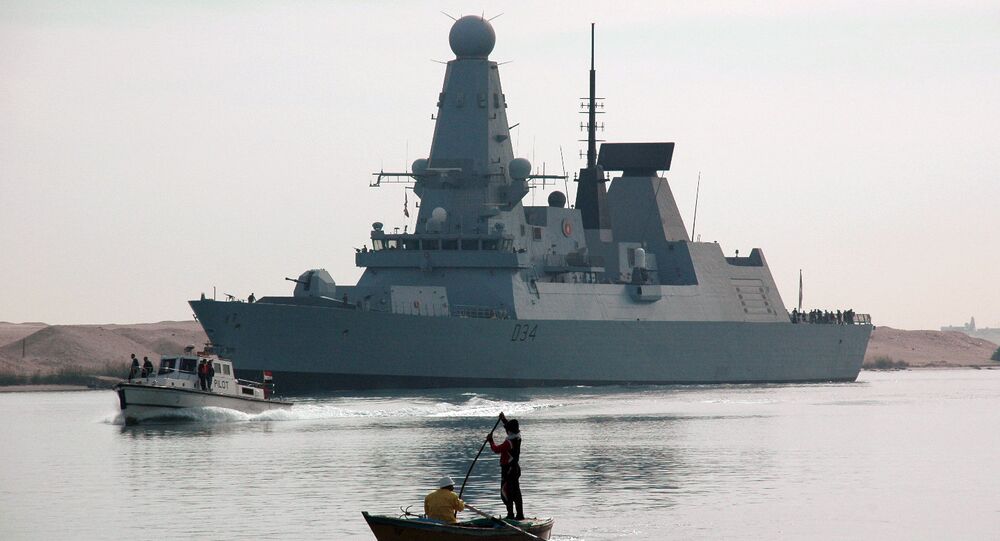 This week, UK media reported that the HMS Diamond destroyer would be sailing to the Black Sea, with commandos, marines, and advanced anti-aircraft missiles on board, in Britain's largest operational mission to the region since the Cold War. Speaking to RIA Novosti, military analyst Konstantin Sivkov explained why the UK was making its move now.

Over the weekend, the British Royal Navy announced that it would be sending the HMS Diamond to the Ukrainian coast to help protect the 650 British troops currently involved in secret training exercises in the Eastern European country.

© Flickr / Defence Images
'Former Queen of Seas': What is Behind UK Decision to Send Destroyer to Ukraine
Defense Secretary Michael Fallon called the deployment of the Daring-class destroyer, equipped with Sea Viper anti-aircraft missiles, "a clear message that [the UK] is committed to defending democracy across the world." Fallon added that London remained fully devoted to "support Ukraine's sovereignty, independence and territorial integrity."

Captain 1st rank Konstantin Sivkov, a veteran of the Soviet Navy and a well-respected Russian military analyst, believes that there are important geopolitical reasons for London's decision to deploy its warship to the Black Sea now.

Speaking to the RIA Novosti news agency, the analyst explained that if US President Donald Trump follows through with a policy of extricating his administration from the crisis in Ukraine, NATO's European members will have to pick up the slack and "attempt to replace the American presence with their own."

At the same time, the military observer noted that the HMS Diamond's deployment is likely to have been planned for weeks if not months ahead of time. NATO, he recalled, "is constantly moving its ships around the Black Sea, first American destroyers, then British ones; this is the planned work of NATO. The exercises were planned some time back, when Barack Obama was still the US President."

In any case, Sivkov noted, the message seems to be that "NATO still exists, and is moving toward [Russian] borders."

© Flickr / International Campaign to Abolish Nuclear Weapons
Congress Commissions Study on What Would Happen if US Preemptively Nuked Russia
Sivkov suggested that judging by military capabilities alone, the HMS Diamond is actually inferior to American destroyers of a similar class. Accordingly, it does not present any major threat to the Russian Black Sea Fleet.

"The HMS Diamond is inferior to the US destroyers of the Arleigh Burke class. The British don't have Tomahawk cruise missiles at their disposal. This ship is mainly tasked with anti-aircraft and anti-submarine warfare. It is armed with the American-made Harpoon anti-ship missiles, with an effective range of about 250 km."

Therefore, Sivkov noted that in the event of a hypothetical conflict, the HMS Diamond "can be easily neutralized by our forces, first and foremost by the missile cruiser Moskva, which has an [anti-ship] striking range of 500 km, allowing it to strike without even leaving its base."

"Alternatively," the analyst noted, "the warship can be destroyed by naval aviation – by our Su-34s equipped with Kh-35 anti-ship missiles."

© Sputnik / Vasiliy Batanov
The guided missile cruiser "Moskva" in its base in Sevastopol.

"In other words, there aren't any problems," Sivkov noted. "It's simply unpleasant to see that a British destroyer has appeared in the Black Sea, and that NATO is continuing its efforts to try and master the body of water."

'Former Queen of Seas': What is Behind UK Decision to Send Destroyer to Ukraine