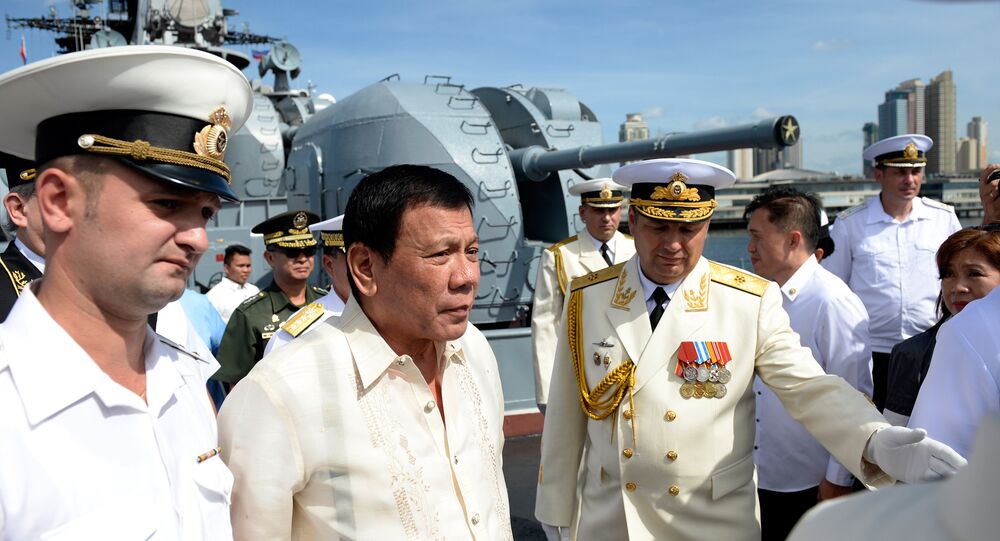 The Philippines' military is looking forward to signing a memorandum of understanding with Moscow to allow regular contacts with its Russian counterparts, Defense Secretary Delfin Lorenzana said. Manila is also pursuing through Russian weapons offerings, and is considering purchasing specialized sniper rifles, UAVs and maybe even submarines.

Speaking at a press conference on Thursday, Philippines' Secretary of Defense Delfin Lorenzana confirmed that he would be joining President Rodrigo Duterte for his official visit to Moscow in April or May. He noted that he looks forward to signing a Memorandum of Understanding with his Russian counterpart during the visit that would allow for regular exchanges to take place between the two countries' militaries.

"I will accompany the President there. We hope to sign an MOU – a military-to-military agreement with the Russians, that would allow visitation of troops and perhaps ships coming here," the Secretary said. "They could observe our exercises. We could also observe their exercises there," he added. The agreement may also allow for the exchange of students in Russian and Filipino officer schools, according to the official.

© AP Photo / Aaron Favila
Philippines Open to Joint Military Drills With Russia
"Maybe later on we could also go into joint exercises; but that will be in the future," Lorenzana noted. "It's not part of the MOU that will be signed," and would require separate treaties, the Secretary of Defense clarified.

Lorenzana added that Russia has offered Manila a variety of different weapons systems, including "ships, submarines, aircraft, and helicopters."

"We will look into that because we should buy in accordance with our modernization plan…We will buy smart, will buy quality items and which will suit the needs of people on the ground," the defense official stressed, pointing to Manila's modest efforts to modernize the military.

As far as the subs go, the Philippine government's news bureau has indicated that the Department of National Defense is "determining whether these specialized ships are essential for the modernization needs of the Armed Forces of the Philippines, and whether the country can afford to acquire and maintain such an expensive weapons platform."

"Do we need submarines? Let's find out. It depends on the needs of the country," Lorenzana added.

According to the official, the military is also "interested in [Russian-made] specialized rifles, like sniper rifles…We are also thinking of buying – we'll find out if they have good quality UAVs or drones. We might be able to consider those." Earlier, President Duterte expressed an interest in Russian assault rifles, hailing them to be 'among the best in the world'.

Earlier this month, Russia's Admiral Tributs anti-submarine destroyer arrived in the Philippines along with the Boris Butoma tanker ship for a four-day goodwill visit.

© REUTERS / Noel Celis/Pool
Philippine President Goes Aboard Russian Destroyer in Manila
During the port call, President Duterte was invited aboard the Admiral Tributs, shaking hands with Rear Admiral Eduard Mikhailov of the Russian Navy and welcoming Russia as an "ally," adding that the Russian Navy is free to visit the country's ports "anytime."

During the visit, Russian Ambassador to the Philippines Igor Khovaev said that Manila had shown an interest in diversifying its alliances, with Russia "ready to become a new reliable partner and a close friend of the Philippines."

"It's not a choice between these partners and those ones. Diversification means preserving and keeping old traditional partners and getting new ones," Khovaev emphasized.

"We are ready to supply small arms and light weapons, airplanes, helicopters, submarines and many, many other weapons," Khovaev noted, adding that Russia was serious about negotiating on the sale of modern "sophisticated weapons," including diesel submarines.

Russian officials have since indicated that terrorism and anti-piracy efforts may be an important area of cooperation between the two countries. Manila has been fighting a counter-insurgency campaign against Ansar Al-Khilafah Philippines (AKP), a militant group which has pledged its allegiance to Daesh (ISIL/ISIS).