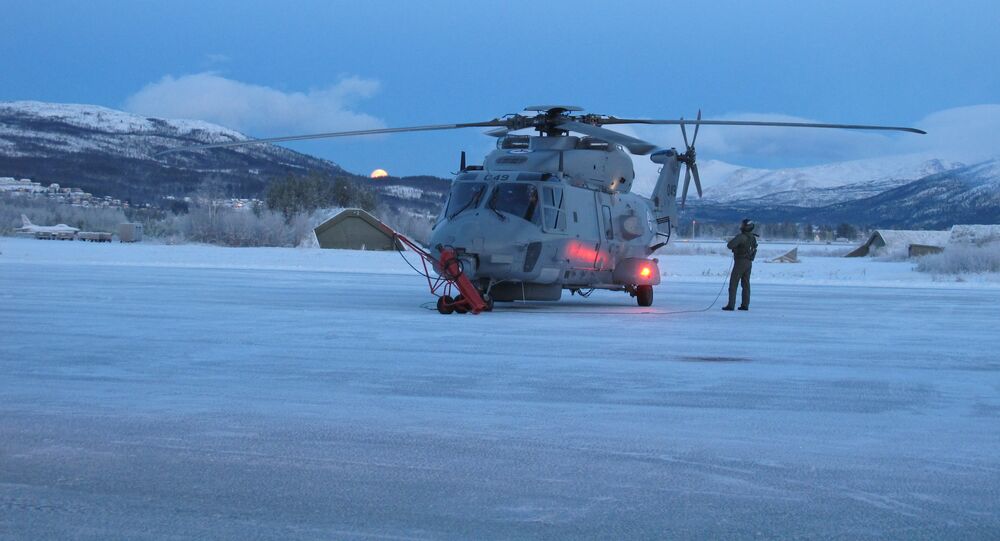 Although it has been 16 years since Norway ordered a batch of NH90 helicopters for billions of kroner to assist the Coast Guard, the helicopters are still not operational. To add insult to injury, it was recently found that the prized helicopters cannot stand on deck in bad weather.

© AFP 2021 / LAURA bUCKMAN
Nobody Here But 'US': Oslo Aims to Outsource National Defense
In 2001, the Norwegian Armed Forces acquired 14 NH90 helicopters to replace its decades-old Lynx helicopters, but delays and limitations have led to the bitter fact that they are still not fully operational, as of 2017, Norwegian newspaper Kyst og Fjord reported. The deal set Norway's state coffers back a staggering 6.8 billion NOK ($800mln), yet only four helicopters have been delivered. Since 2014, the Norwegian Coast Guard has therefore been left without their own helicopters to assist in various missions.

According to Coast Guard Chief Sverre Engeness, helicopters are a huge asset when it comes to keeping track of Norwegian waters and may also come handy in transporting sick sailors ashore.

In addition to delays, the helicopters were found to have serious deficiencies and may be deemed unfit for service in the Coast Guard. The NH90's Achilles' heel is that it only tolerates a lurch of around 20 degrees when aboard coastguard vessels, whereas Norwegian helicopter carriers are known to run a lurch of nearly 50 degrees in rough seas.

​"It means that we are unable to take the helicopter out to sea," Coast Guard Chief Sverre Engeness told Norwegian national broadcaster NRK.

© AFP 2021 / YIANNIS KOURTOLGOU
Oslo's New Defense Plan Leaves Norwegian Coast Defenseless
The Coast Guard is now waiting for the new edition of the helicopter to be delivered in a year's time. According to Engeness, the manufacturers will therefore be able to make changes before a new model is deployed.

Member of Parliament Jan Arild Ellingsen of the Progress Party ventured that the new information is enough proof that the Defense Ministry has failed in a very important area.

"This is a political scandal. Once again, we hear about the failures in key areas, which is totally untenable," an enraged Ellingsen told NRK.

Knut Erik Oulie, project coordinator at the Norwegian Armed Forces, nevertheless believes that the problem will solve itself.

"We are quite confident that this is a temporary restriction only, which will dissolve during this season," Oulie told Kyst og Fjord.

​The NH90 is a medium-sized, twin-engine, multi-role military helicopter. It was developed in response to NATO requirements for a battlefield helicopter which would also be capable of being operated in naval environments. The NH90 was developed and is manufactured by NHIndustries, a collaborative company in which NATO countries Germany, France, Italy and Spain have ownership interests. During its early service, the NH90 suffered multiple teething issues, which in turn delayed active use by some operators.

© Flickr / Bruno Jargot
From Opponent to Supporter: Norway on Its Way to NATO Missile Defense
However, years of delays and problems have caused considerable irritation in end user countries. Denmark jumped off the NH90 bandwagon chose an American alternative instead.

Norway has also considered breaking the contract. In 2013, then-Defense Minister Anne-Grete Strøm-Erichsen told Norwegian daily Aftenposten that the precarious situation when the entire Coast Guard would be left without helicopters (which in effect appeared after the last of the Lynx helicopters was taken out of service) spoke against the termination of the contract.