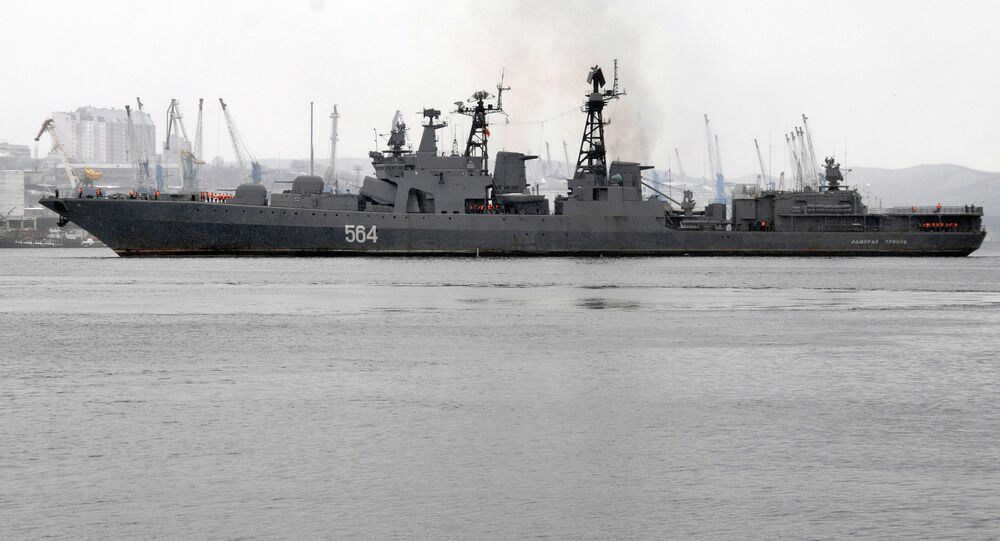 While Russia will operate “in full compliance with international law,” Khovaev said that Russia is “ready to supply small arms and light weapons, some aeroplanes, helicopters, submarines, and many, many other weapons. Sophisticated weapons. Not the second-hand ones.”

Duterte has made good on his promise to weaken ties with Washington after welcoming Russian warships for unprecedented navy-to-navy maritime exercises between Moscow and Manila. Russian Rear Admiral Eduard Mikhailov indicated that the war games would focus on two scenarios most likely to destabilize the region’s waters, maritime piracy and terrorism.

Filipino President Rodrigo Duterte’s pivot from ties with the US launched into overdrive in October 2016, when he said in a speech that US President Barack Obama to "go to hell" for treating the country "like a doormat."

From the deck of the anti-submarine cruiser Admiral Tributs, Khovaev emphasized a stronger Moscow-Manila bond did not have to be at the expense of souring ties with Washington, suggesting that economic cooperation can bring mutual benefits to the parties involved, and diversifying one’s foreign partners is simply smart economics. "It's not a choice between these partners and those ones. Diversification means preserving and keeping old traditional partners and getting new ones. So Russia is ready to become a new reliable partner and close friend of the Philippines," he said.

The Ambassador also expressed that Russia does not intend to "interfere" with Manila’s relations to its "traditional partners," a clear nod to Washington, which once held the Philippines as a territory before allowing Manila to engage in self-rule.

But Washington has its own share of problems with the outspoken Filipino leader. US Senator Ben Cardin (D-MD), ranking member of the powerful Senate Committee on Foreign Relations, denied the sale of 26,000 automatic M4 assault rifles to the Philippines, as a punitive measure for the state-sanctioned killings of thousands of Filipinos, after they were accused of using illegal drugs.

Duterte shot back: “look at these monkeys. The 26,000 firearms we wanted to buy, they don’t want to sell,” before saying he would look to Beijing and Moscow to expand Manila’s arsenal.

Since Duterte rose to power on June 30, 2016, conservative estimates suggest that over 2,300 people have been killed at the hands of Filipino police officers or vigilantes, in connection with Duterte’s bid to eliminate narcotics use by simply killing all of those thought to be involved, whether proven or not.

If China, Russia Create New World Order, Philippines 'Will Be First to Join'