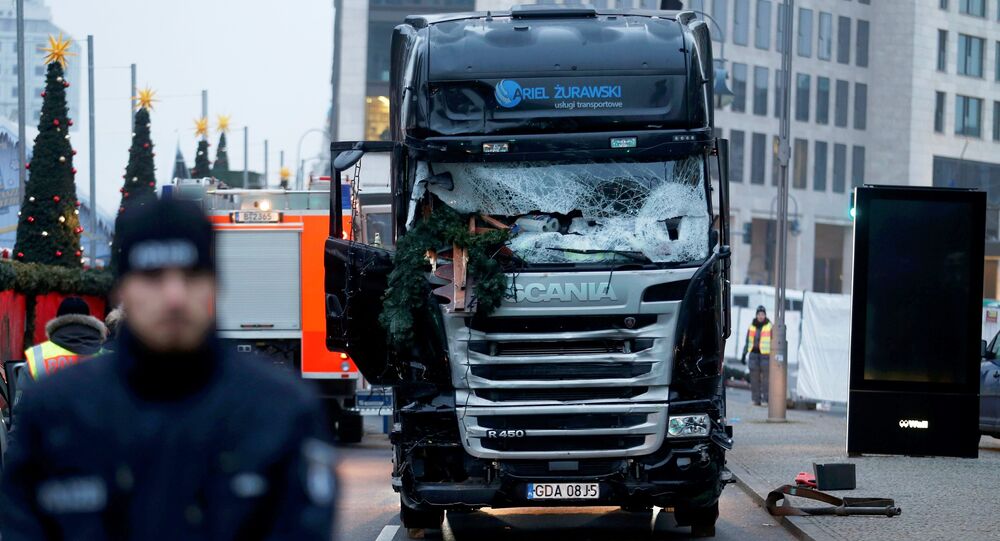 The attack in Berlin which killed at least 12 and injured 48 has sent shockwaves throughout the governments and publics of the world - and a terrorism expert has told Sputnik there's little that can be done to stop similar attacks occurring elsewhere.

Response to the assault was swift, both in Germany and elsewhere. German Special Forces rushed to conduct searches in a refugee camp in Berlin's closed Tempelhof airport's hangar, as the detained truck driver was registered there.

Russian President Vladimir Putin promptly dispatched a letter of condolence to German President Gauck and Chancellor Merkel, saying the attack shocked "with its cruelty and cynicism." Outgoing US President Barack Obama assured Merkel of US support in any investigation into the crime.

Moving forward, the German Interior Ministry stated that police will conduct armed nationwide patrols during the holidays, the French Interior Ministry said all France's security forces will be kept at a "maximum level of vigilance," and London's Metropolitan Police announced they were reviewing security plans over the Christmas and New Year period.

"It's not feasible to fully prevent the means and mechanisms of terrorism and political conflict, even if guns are controlled and well-regulated, household chemicals and heavy goods vehicles are readily available. Therefore, efforts should be directed to countering the causes of the conflict."

The incident recalled the July 14 Nice attack, which killed 86 and injured 434.

© REUTERS / Eric Gaillard
French police forces and forensic officers stand next to a truck July 15, 2016 that ran into a crowd celebrating the Bastille Day national holiday on the Promenade des Anglais in Nice, France, July 14

But what accounts for the rise of terror attacks executed via non-traditional means?

Professor David Lowe, a former UK Special Branch Counterterrorism officer, told Sputnik that while EU efforts to stem the flow of black market armaments in Europe may play a role, the use of vehicles to carry out atrocities was originally endorsed by now deceased Daesh spokesperson Abu Mohammad al-Adnani in September 2014, who announced that Americans and Europeans could be killed "in any manner," including rocks, knives and cars.

Moreover, Professor Lowe adds that while no group has taken responsibility for the attack yet, Daesh may have higher priorities than issuing media statements, as the group is currently retreating from almost every area it once occupied.

"Truck attacks are appealing, because they cause large casualties and max mayhem — the timing ties in with this too. People are letting their hair down and going around in groups, meaning they're more vulnerable — and the fact it's a period of rest and relaxation intensifies the terror effect," Professor Lowe told Sputnik.

Professor Lowe added that another point of attraction is that attacks can be carried out by individual actors within a group or individuals working entirely alone. Terrorists are increasingly wise to security services' surveillance capabilities and are finding it more difficult to source guns and explosives. Conversely, a truck attack requires virtually no planning or skill to be carried out effectively.

"Such 'lone wolf' attacks are a real nightmare scenario for security services, as they can be impossible to detect in advance. Perpetrators don't need to discuss it with anyone via any medium before carrying them out — they just carry them out. And there's not much that can be done to prevent it from happening. I sincerely doubt we'll be seeing a ban on heavy goods lorries in major cities any time soon — the impact on trade would be too severe."

"As awful as this attack is, I can count on two hands the number of major terrorist attacks in Europe over the past two years. We're pretty safe, the likelihood of something happening is very small, so go about your business as usual — just be vigilant. If you see something, report it," he said.

Germany seems to already be adopting a 'keep calm and carry on' approach; a spokesperson said Christmas markets and other major events in Germany will continue, albeit with some extra security measures implemented.

Calls for Stricter Arms Controls: 'Weapons We Sold Can Be Used Against Us'