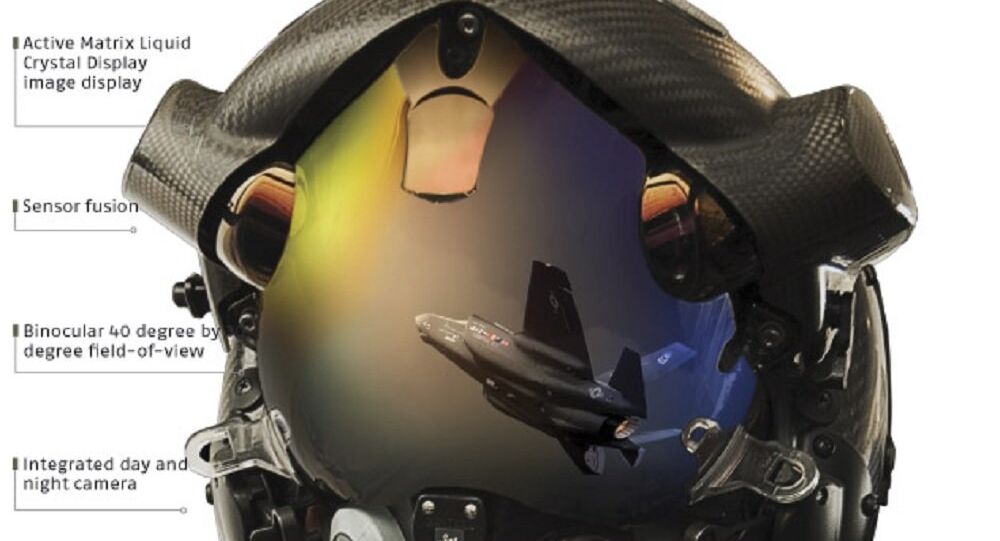 Pilots have completed initial testing of a custom-fitted helmet for the F-35 Joint Strike Fighter that provides a 360-degree view of enemy targets, day or night, offering US military aviators unrivaled situational awareness, the Department of Defense said in a release Thursday.

WASHINGTON (Sputnik) – A custom-fitted helmet whose visor provides a 360-degree view of enemy targets even at night will give pilots of the F-35 Joint Strike Fighter unmatched situational awareness against adversaries.

"The helmet-mounted display (HMD) allows critical flight data to be viewable anywhere I look," the release quoted one test pilot, Marine Corps Maj. John Dirk, as saying after a recent demonstration of the gear. "The helmet helps me find friendly and enemy aircraft, locate targets on the ground, and can even point out the ship."

The display is fully integrated with the aircraft’s systems and enables a seamless transition between tactical display and the outside world, Dirk added.

The helmet also includes a Styrofoam liner that is fabricated on site to match the pilot’s head shape, as well as controls that allow pilots to toggle through several display settings and different gradients of opacity on the helmet’s visor, the release explained.

Different models of the F-35 are being customized for each branch of the US military. However, development of the aircraft is more than seven years behind schedule and is expected to cost $1.5 trillion throughout the program’s lifespan.

Tags:
pilot helmet, F-35, US military, US Department of Defense (DoD), US Navy
Community standardsDiscussion
Comment via SputnikComment via Facebook