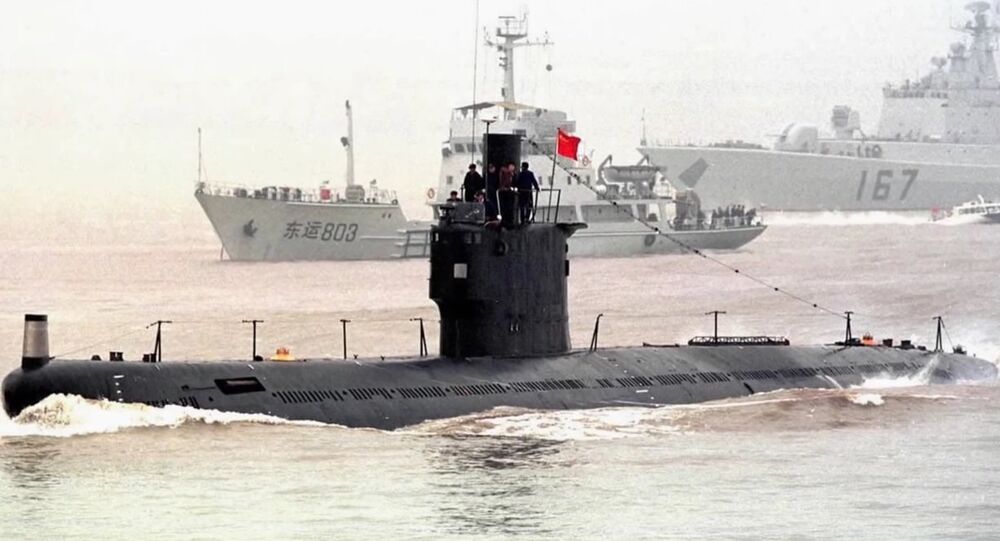 © AFP 2020 / POOL / Guang Niu
Indian Navy Increases Vigil as China Deploys Nuclear Submarine in Pak Waters
India's eastern neighbor Bangladesh acquired two diesel-electric submarines from China for $203 million. After they enter service in 2017, they will become the first and only submarines in the Bangladesh Navy.

However, Bangladesh’s geography is one of the reasons why questions and speculations have been raised regarding this purchase.

Bangladesh is almost entirely surrounded by the territory of India and has only a small border with Myanmar. A number of Indian observers have interpreted the Chinese supply of submarines to Bangladesh as part of China's policy on “encirclement” of India.

© AFP 2020 / STR
China, Pakistan Bonhomie Forces India to Rethink Its Nuclear Submarine Plan
Russian military expert, Vasily Kashin, however, thinks otherwise. The two submarines purchased by Bangladesh are modernized 035 project version subs. They were constructed in the 1970s and were considered not to be successful. After modernizing the 035G project subs were equipped with new torpedoes and sonar stations copied from the French sonars.

According to the expert, the Chinese navy used 035G submarines in combat training in 1990-2000.

Moreover, the 035G submarines were obsolete even at the start of their construction in the late 1980s. This was precisely the reason which forced China to purchase 12 submarines from Russia later on.

Talking about the regional situation, Kashin told Sputnik China that, “Against the background of eight modern submarines of project S20 which China intends to supply to Pakistan, two 035G to the Bangladesh Navy hardly represent a big problem for a potential enemy.”

The expert further said that lack of experience of the Bangladesh Navy and their possession of the obsolete 035G submarines make them an easy target for a more advanced Indian Navy in case such a situation arises.

Thus, the Indian discontent is not due to the supply of this particular submarine, but it is due to the fact that Bangladesh is strengthening its military using Chinese weapons. In addition to the submarines, Bangladesh had also purchased Chinese project 056 corvettes.

The expert also added that there are reports that they had also purchased frigates and there are numerous contracts in recent years for the supply of military equipment to the army and the air force.

The expert further noted that, “Judging by some Indian publications, if Bangladesh had purchased the same or even a larger number of weapons from extra-regional suppliers, for example, Russia or Europe, it would not have caused such negative emotions from the Indian side.”

There is an ethnic conflict involving Muslim population of Myanmar, which has caused a major refugee influx. In addition, in the past, Bangladesh and Myanmar had maritime territorial disputes which they managed to resolve only just recently.

Kashin also said that perhaps acquisition of the submarines was done out of prestige considerations. In recent years, many ASEAN countries have purchased submarines. At some point, Myanmar also considered buying them but abandoned the plan due to the lack of funds.

“However, a number of other ASEAN countries such as Vietnam, Singapore and Indonesia have already formed their submarine fleets, or like Thailand are planning to create one soon. Perhaps, Bangladesh does not want to stay behind them too much,” the expert concluded.