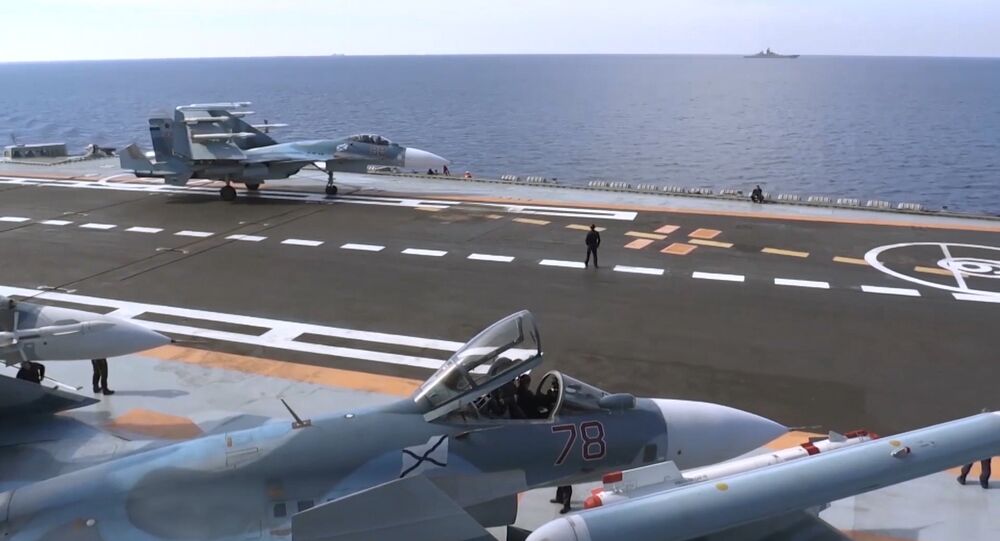 The crash of a Su-33 fighter jet that skidded off the deck of the Admiral Kuznetsov aircraft carrier became yet another “bitter lesson” learned by Russian armed forces during the military operation in Syria.

© Photo : Ministry of defence of the Russian Federation
Kremlin on Su-33 Accident in Mediterranean: 'Main Thing is the Pilot is Alive'
A Russian Su-33 fighter plane ended up skidding off the deck of Admiral Kuznetsov aircraft carrier during landing due to the arresting device malfunction.

Thankfully, the pilot managed to eject and was successfully recovered by a rescue team and, according to the Russian Defense Ministry, his life is not in danger.

Military analyst Viktor Baranets told Radio Sputnik that this is not the first time the aircraft stationed aboard Admiral Kuznetsov sustain non-combat losses during the Syrian campaign: on November 13 a Mig-29 fighter jet crashed into the sea after running out of fuel while waiting for a landing clearance which was apparently delayed due to another arresting gear malfunction.

"I’d call it the ‘bitter Syrian lessons. Despite its cute name, Svetlana, that arresting gear became a real gravedigger for our planes. It is a very cumbersome and complex system, and we’re not the only ones suffering from such problems – some US aircraft too ended up dropped into the sea by an arresting gear cable. This is a global military-technical problem, so to speak, as there has never been an absolutely perfect landing on any aircraft carrier. What happened now was exactly what President Vladimir Putin spoke of: the Syrian operation exposes strengths and weaknesses of our military hardware," Baranets explained.

He also speculated that the aircraft stationed aboard Admiral Kuznetsov will likely be transferred to the Hmeymim airbase until the malfunction that triggered the aforementioned incidents is resolved.

"I believe that they’ll be doing their utmost to fix this problem. Risking (more aircraft) would hardly be prudent, so while the arresting gear is being repaired the planes will be transferred to Hmeymim," the analyst concluded.