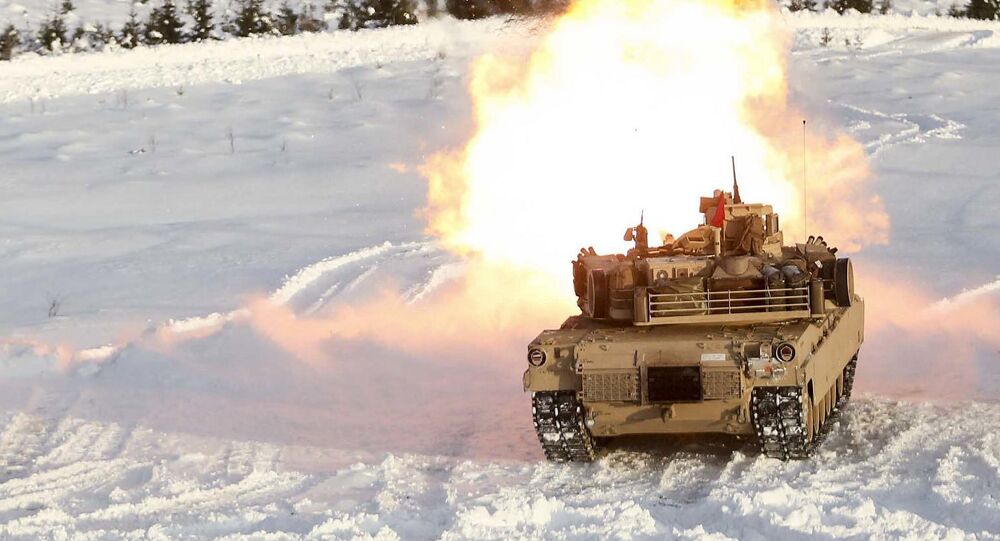 Norway, where 330 US Marines are to be stationed next January to enhance the country's security, is holding joint exercises with American soldiers in the trademark Nordic cold. The goal of the "realistic scenario" exercise near the town of Bardufoss is to prepare for the Russian "hybrid war."

© AFP 2021 / ANTONIO SCORZA
Drone-Wary Nordics Demand Harsher Anti-Surveillance Laws Amid Espionage Fears
In the course of the joint exercise, Abrams tanks were set farther north than they ever have been before. Additionally, a unit from North Carolina is training with Norwegian troops. According to the Norwegian Armed Forces, this is a special occasion to train against "hybrid war" on Russia's part, Norwegian daily Dagbladet reported.

The very concept of hybrid war has spread outside military circles after the conflict in Eastern Ukraine broke out in 2014. The notion of hybrid war implies a state or another actor using diplomatic, military, economic or technological means to inflict damage to another country.

According to brigadier Eldar Bernil, Crimea's re-unification with Russia, which was perceived as a hostile takeover, made Norway shift its focus from Afghanistan to collective defense.

At present, Norway reportedly stands prepared for the "Crimean" scenario. The first strategy involves the presence of armored vehicles, which would confront "separatists" and force their backers, i.e. Russia, to introduce armored vehicles of its own, thus making state backing obvious. Secondly, the presence of US Marines ensures that any encroachment on Norwegian territory automatically involves US retaliation.

© AFP 2021 / LAURA bUCKMAN
Nobody Here But 'US': Oslo Aims to Outsource National Defense
The controversial decision to station 330 US Marines at Værnes base, which according to Norwegian Defense Minister Ine Eriksen Søreide was "in line with the general Norwegian policy," came under fire from the opposition for "relinquishing the responsibility for Norway's security to US marines."

The Russian Embassy in Oslo stressed in an e-mail to Adresseavisen that the policy of avoiding foreign troops on Norwegian soil always has been an advantage to Norway, even in the time of the Cold War.

On a curious side note, despite the fact that Bardufoss lies over 500 kilometers away from the Russian border, many media presented the maneuver as if it was held in Russia's immediate proximity. Earlier this week, CNN published its report on the exercise with dateline Kirkenes, which is in fact a town near the Norwegian-Russian border, which led fellow media outlets into the erroneous belief that the exercise was held on NATO's frontier to Russia.

This annoying inaccuracy made Thomas Nilsen, editor of the Kirkenes-based Independent Barents Observer magazine, shake his head in disappointment.

"For us who daily follow the propaganda of the Russian state media, CNN's coverage proves the fact that the drums of war are played rather subjectively even in American media," a dismayed Thomas Nilsen told iFinnmark outlet.