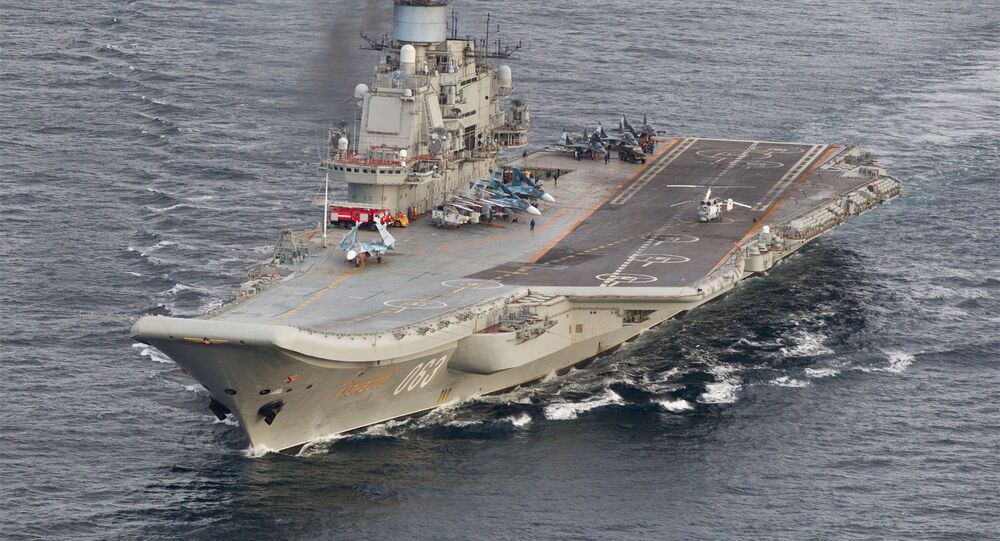 In response to tensions in the Mediterranean Sea and the mounting presence of the Russian Navy in the region, Italy will spend in the coming years €5.4 billion ($5.7 billion) to upgrade its naval forces.

Previously, the Italian Defense Ministry said that the new warships would be used only for humanitarian operations.

In 2015, the Defense Ministry and Fincantieri shipyard signed a contract to build an amphibious assault ship equipped with a helicopter deck.

Last week, Italian analytical center L’Osservatorio issued a report on the country’s large-scale naval modernization program. The document read that by 2026 as a result of the plan, Italy will receive dozens of new units, which will make its naval force capable of competing with, for the example, the British or French fleet.

© REUTERS / Norwegian Royal Airforce/NTB Scanpix
NATO General Explains Why Admiral Kuznetsov's Deployment is Not a 'Hostile' Move
In particular, the modernized naval forces will be used in humanitarian operations and counterterrorism missions as well as to deter Russia’s growing maritime presence in the region.

Meanwhile, the Italian media has reported that the large-scale modernization program was partially initiated by the navy command and personally by Admiral Guiseppe De Giorgi. He insisted on the reform, citing rising tensions in the Mediterranean as the main reason. Recently, the admiral was under investigation over corruption allegations.

However, according to media reports, after the contract was agreed De Giorgi made several changes to the document.

© Flickr / US Air Force
Lockheed Ordered to Build 90 F-35 Combat Jets for US, Allied Countries
As a result, the initial amphibious ship turned into a light aircraft carrier carrying newest F-35B jets. The new flattop will be able to compete with the current Italian naval flagship Cavour.

Moreover, the specifications of the patrol ships were also changed making them close to frigates (a length of 143 meters and a displacement of 6,200 tons). They have a module design and can carry guided anti-ship missiles and a missile defense system.

Despite cutting spending on the army and the air force, Italy’s naval modernization program is the most ambitious in Europe, except for Britain’s plan to build two full-scale aircraft carriers, said Mikhail Barabanov, an expert at the Analytical Center for Strategy and Technologies.

"The plan is to build warships and vessels worth €5.4 billion ($5.7 billion). The program includes a versatile amphibious ship which in fact will be an aircraft carrier worth €1.5 billion ($1.6 billion). In addition, it includes a large supply ship, three patrol ships and two motor boats for Special Operations Forces," Barabanov told the Russian newspaper Izvestia.

© AFP 2021 / MAHMUD TURKIA
NATO's Bidding Puts Italy on a Collision Course With Russia
Recently, the Italian Navy requested to build another four non-nuclear submarines of project 212A, in addition to four already in service.
Barabanov noted that Italy is successfully building 10 FREMM-class large frigates while the French Navy has decreased the number of projected FREMM warship from 17 to 6.

According to the expert, Italy wants to play the key role in NATO and Europe’s efforts in the Mediterranean.

"It’s no surprise that Italy is focused on naval modernization. There are no serious military threats to Italy in Europe but there are some visible threat coming from Africa and the Middle East. An additional stimulus is Russia’s growing presence in the Mediterranean," Barabanov said.

Italian PM Confident in Continuing Strong Friendship With US Under Trump