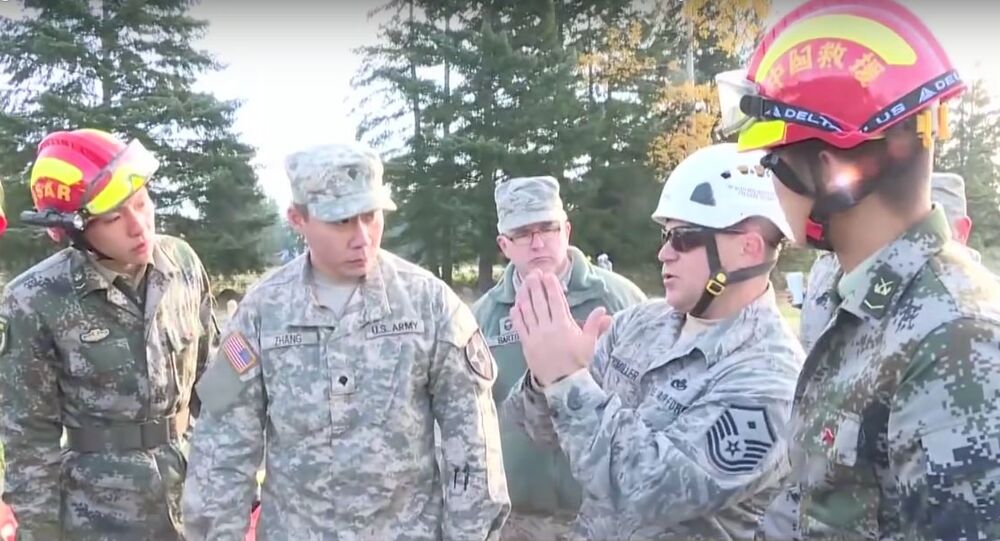 This week Chinese and US troops are holding six days' worth of joint exercises, aimed at improving cooperation in search and rescue operations. Experts say such drills, held against the background of a US Congressional report saying that China's growing military power poses a threat to US national security, may just help avoid military conflict.

The ongoing joint exercises, being held at a military base in Kunming, southwest China, involve over 100 Chinese and 89 US troops, according to Chinese English-language television network CCTV.

They are the first joint Chinese-US drills since the election victory of President-elect Donald Trump. They are also taking place amid the release of a Congressional advisory report warning that China's military buildup could pose a serious threat to US national security. The report calls on the US government to investigate just how much outsourcing to China may have weakened America's military industrial complex.

© REUTERS / Jonathan Ernst
Will Tariff Wall Against China Make America Great Again?
Asked to comment on the impact such drills have on Chinese-US relations, Russian military expert Vasily Kashin told Sputnik that they can only serve to reduce tensions and to help prevent a conflict from breaking out between the two countries. In this sense, he stressed, they are a good thing.

Kashin recalled that Chinese-US relations have gone through a difficult period recently, given tensions in the South China Sea, Washington's decision to deploy THAAD in South Korea, and Donald Trump's election rhetoric about putting more pressure on China in the economic, political and military sense.

"Still, Chinese-American contacts in the military sphere continue, and this is an extremely important and positive thing," the analyst said. "The exchange of delegations, meetings of experts to discuss sensitive issues, and joint drills are an important prerequisite for ensuring international security. They allow the militaries of the two countries to more clearly understand one another's intensions and capabilities, and to be able to communicate more quickly in the event of a crisis."

The expert stressed that "in and of themselves, contacts of this kind shouldn't be seen evidence of good relationship, but they do help to avoid any dangerous accidents."

© Flickr / Trey Ratcliff
Trump's Asian Pivot: 'US to Jump on One Belt, One Road Bandwagon'
Kashin explained that the continuation of exercises no matter what state political relations between Beijing and Washington are in at any given moment is part of a new Chinese doctrine.

"In the past, military ties have often suffered from negative developments in political relations between the two countries. Specifically, they could be interrupted in response to the US supply of arms to Taiwan. Now, China's approach to the maintenance of military ties with the US has changed. General Yao Yunzhu of the Chinese Academy of Military Sciences celebrated the formation of a 'new normal' in Chinese-US military relations."

This means, for example, that even in a situation of difficult political relations, the two countries could conduct joint anti-piracy drills in the Gulf of Aden.

"More importantly," Kashin noted, "a whole series of mechanisms has been created to maintain dialogue on security issues at different levels, from participation of military leaders at the annual bilateral strategic dialogue, to regular talks among experts on military policy. The two sides have reached an agreement on mutual notification of any major military activities either side undertakes. Connections also exist between the leading military universities and research centers of the two countries."

© Flickr / wei zheng wang
Beijing Hopes Trump to Follow 'One China' Policy Regarding Taiwan
Ultimately, the analyst stressed that the gap in Chinese-US military capabilities will continue to shrink, and Chinese strategic capabilities, including the number of warheads, their range, and the marine component to the Chinese nuclear deterrent will continue to be strengthened.

"In such conditions, the existence of effective mechanisms in both China and the US to prevent incidents, and good channels of communication between the two countries' militaries become important for the entire world," Kashin concluded.