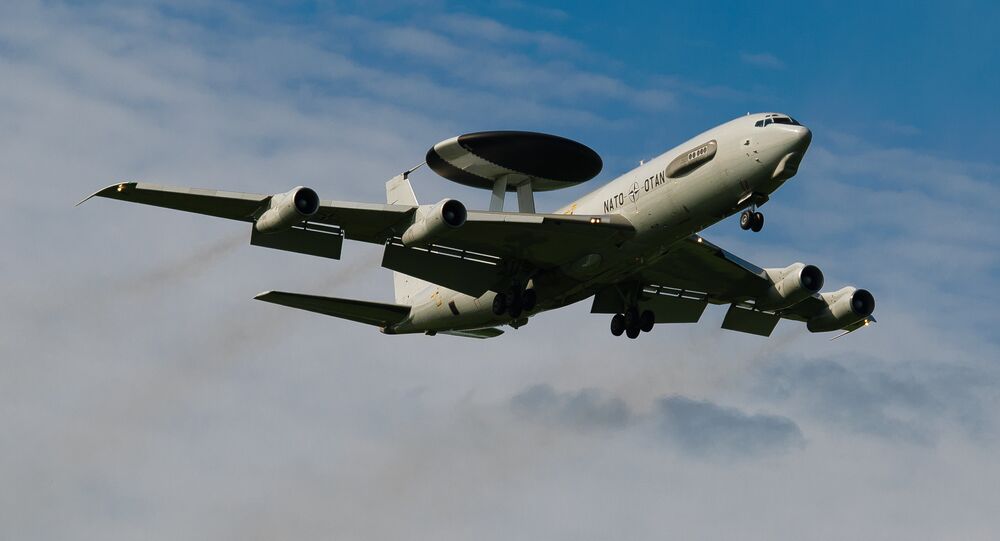 Last week, NATO announced that it had begun tracking the movement of Russian military aircraft operating in Syria using AWACS reconnaissance planes operating from Turkish bases. But as luck would have it, Russia has just received all the tools it needs to neutralize the alliance's snooping.

In late September, NATO announced that a fleet of 16 Airborne Early Warning and Control Systems (AWACS) aircraft would be sent to Turkey, ostensibly to help the alliance's ongoing efforts against the Daesh (ISIS/ISIL) terrorists. A month later, the alliance confirmed that the aircraft had been deployed, and that they started their surveillance of Syrian airspace beginning October 20.

NATO stressed that the planes are being flown only over international airspace or over Turkey, and will not enter Syrian airspace. Nevertheless, their presence will give them the theoretical capability to monitor aircraft flying over much of Syria. The systems aboard the 16 Boeing E-3 Sentry aircraft allow them to detect targets flying at low altitudes from distances of up to 400 km, and from distances between 450 and 650 km for planes flying at medium and high altitudes. In other words, hypothetically speaking, they can easily detect aircraft operating in Syria without ever crossing the border.

© Flickr / Airman Magazine
An E-3 Sentry with the US Air Force
© Flickr / Archangel12
US Air Force Command Apologizes for US Planes Flying Close to Russian Jets Over Syria - Russian MoD
The E-3s were deployed to Turkey at Ankara's request, and following a formal decision at the NATO summit in Warsaw in July. The aircraft have been placed at an air base in the central Turkish province of Konya.

Moscow obviously hasn't been fooled by alliance claims that the planes were deployed to fight the terrorists. Experts have previously pointed out Daesh has no air force, adding that AWACS aircraft in the area are obviously directed against the Syrian Air Force and the Russian air group operating in Syria.

In fact, despite the formal talk of an 'anti-Daesh' deployment, RAF Air Commander Paddy Teakle came out and openly admitted that the planes will be used to spy on Russian and Syrian jets. "I will not deny that the AWACS will monitor the Russian air forces in Syria, and the air forces of Bashar al-Assad, from Turkish territory; given their range, the radars can monitor territory in Syria and Iraq. But this is not our only goal," Teakle said.

As luck would have it, the Russian Ministry of Defense has already worked out a response – installing electronic warfare equipment to the tried and tested Ilyushin Il-22 platform. The new Il-22PP 'Porubshchik' (roughly 'Lumberjack') electronic warfare and reconnaissance system passed state testing in September. One Il-22PP aircraft was handed over to the air force, with two more expected to be delivered later this month.

According to the system's designers, the plane's onboard electronics are specifically designed to counter modern AWACS systems, ground-based air defense (such as the MIM-104 Patriot missile system) and manned and unmanned aircraft.

© AP Photo / Carsten Rehder
Vorsprung Durch Technical Fault: Dodgy German Jets Forced Into Landing in Iraq
The Il-22PP features frequency selectivity, meaning that it will not jam friendly radio electronic systems. Its carrier, a modernized, four-engine Il-22, has a range of up to 6,500 km at altitudes of 8,800 meters and a speed of up to 685 km/h.

In addition to jamming capabilities, the planes are capable of conducting electronic intelligence operations of their own, and of protecting friendly aircraft from enemy electronic warfare.

The new Il-22PPs will soon be complemented by the Tu-214R, a completely new design, equipped with cutting-edge optical, electronic and radar systems. In August, the Defense Ministry confirmed that a Tu-214R had undergone testing in Syria. That aircraft is itself intended to replace the Ilyushin Il-20M electronic intelligence (ELINT) aircraft, but is capable of multitasking.

© Photo : Wikipedia/Rimma Sadykova
Russia's State-of-the-art Tu-214R Spy Plane Successfully Passes Syria Test
The Tu-214R's capabilities include ELINT, signals intelligence (SIGINT) and communications intelligence (COMINT). The plane's antennae are capable of intercepting signals emitted by everything from aircraft to combat vehicles and mobile phones, and can build an electronic order of battle (EOB). The Tu-214R has been undergoing extensive state testing all this year.

In other words, just as NATO decided to deploy over a dozen AWACS planes in Turkey to keep an eye on Syria, Russia rolled out several new aircraft allowing Moscow to jam NATO intelligence gathering operations at the flick of a switch. And that's not even counting the jamming capabilities of ground-based systems already deployed. Whether Russia decides to use this equipment selectively or on a mass scale remains to be seen, but one thing is certain: NATO officials probably won't be the ones to admit that their surveillance operation in Syria isn't gathering as much useful info as they hoped they would get.