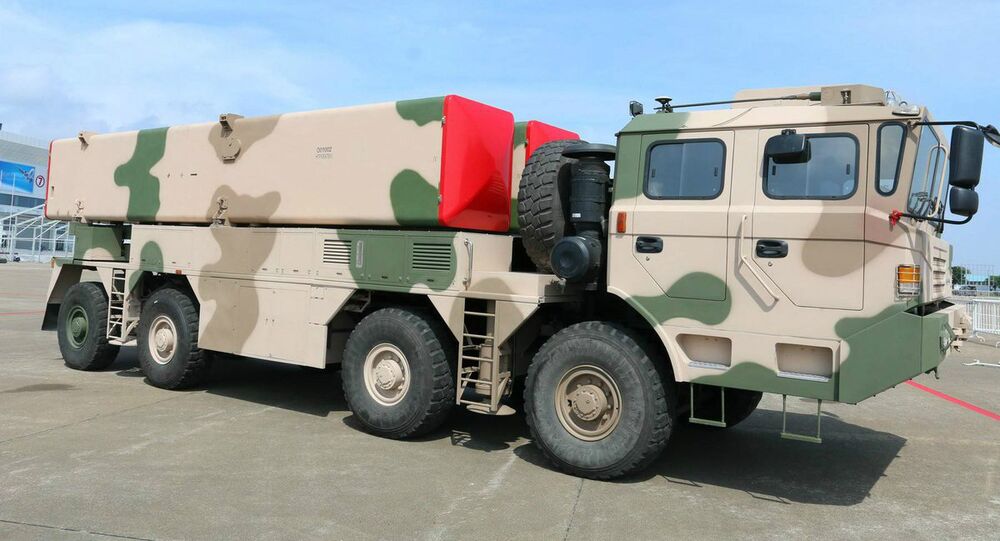 Next week, China is expected to formally reveal an export version of its Dongfeng 12 mobile short range missile system at China Airshow-2016. Commenting on the new weapon, which bears a superficial resemblance to Russia's Iskander, Russian observers suggest it is an indication of the rapid progress made by China's defense complex in recent years.

© Sputnik / Vladimir Fedorenko
First Image of RS-28 Sarmat, Russia's Largest-Ever ICBM, Unveiled (PHOTO)
The website pointed out that the new tactical missile system seems to have similar characteristics, and is even superficially similar in appearance, to Russia's 9K720 Iskander missile system. The Chinese system is said to have an official range between 100 and 280 km, with an actual possible range of as much as 400 km. Unlike the Iskander, the system's inertial and satellite guidance-equipped missiles are configured in dual launch configuration aboard an 8x8 truck chassis.

The system's precise technical characteristics are being kept a secret, but could be officially revealed at Zhuhai next week. Asked to comment on the system, and whether it will pose any threat to the export-potential of Russia's Iskander, military analysts told the independent online newspaper Svobodnaya Pressa that this depends on a combination of factors.

Commenting on the rumored superficial similarity between the two systems, Col. Gen. Viktor Esin, former chief of staff of Russia's Strategic Missile Forces, told the online resource that it is no secret that China has made extensive use of technologies borrowed from abroad to develop its weapons in the past. Countries in the former USSR and the Soviet bloc, particularly Ukraine, have assisted them in doing so, he added.

© AFP 2021 / ALEXANDER NEMENOV
The Iskander ballistic missile launcher at a parade rehearsal. Grom-2 is ostensibly meant to compete with the Russian SRBM.

The officer noted that "as far as the M20 [another name for the Dongfeng 12] is concerned, little is known about it, but I would not speak about it being a direct derivation." In fact, "in its technical characteristics, the Chinese system appears more like an improved version of the Tochka-U tactical missile complex than a rough analogue to the Iskander."

"The range of the export version of the Chinese system, in accordance with the Missile Technology Control Regime [an international agreement aimed at preventing the proliferation of missile technology] is 280 km. According to my sources, the system's CEP (circular error probable) is less than 30 meters. In other words, we are talking about a highly accurate missile which by all accounts was put into service in 2013 under the name DF-12. To achieve an accuracy of less than 30 meters, it's necessary to be able to control the rocket in flight, and we know that the Chinese have an analogue to the GPS – the BeiDou navigation satellite system."

Esin pointed out that even without the new system, China's arsenal of missile systems is already very large. "This includes the DF-11 (whose range is 300-800 km), and the DF-15 (up to 1,000 km) of various modifications, as well as the new DF-16. Very large variations exist in data regarding the number of such weapons. According to my information, the Chinese have at least 300 DF-11 systems, not less than 500 DF-15s, and between 30-50 D-16s, which have just now started to come online. All of them have two variants in terms of armament – conventional and nuclear. According to available information, about 10-15% of DF-11s, and 20-25% of DF-15s, are equipped with nuclear warheads."

© Sputnik / Alexei Danichev
Iskander-M Missile System Units Conduct Drills in Russia's West
Most of these systems are deployed against India and Taiwan, with those deployed in Taiwan's direction not nuclear-armed, the officer added.

For his part, military analyst Alexander Khramchihin explained that the overall strategy of China's military industrial complex has been the development of large numbers of missile systems. "Their tactical missiles may not be perfect, but they are banking on numbers –even if enemy air and missile defenses take some of them down, some will still make it through to their targets." The analyst suggested that the numbers of DF-11s and DF-15s China has deployed could actually range in the thousands.

Asked about the role borrowed technology has played in building up China's tactical missile potential, Khramchihin noted that basically, "the basis of all Chinese equipment is Soviet technology, with Western tech comprising only a small segment – mostly in helicopter and torpedo designs. China is similar in this regard to the Soviet Union: it copies technologies, and then 'Sinifies' them – that is, gradually develops them to make them their own."

© Photo : Youtube/VoenTV Belarus
Polonez: Belarus Successfully Test-Fires New Multiple Rocket Launch System
"This takes place in all areas, including tactical missiles," the analyst stressed. "Chinese tactical missiles have good demand in the global weapons market, first and foremost in the Middle East. The export version of the M20 may well find its niche."

Andrei Frolov, editor-in-chief of 'Arms Export' magazine, explained that unlike Russia, which has been reticent to export its missile technology (the only other country operating Iskander is Armenia), China has actively pursued potential foreign markets.

"In other words, in this segment there are the Americans with their MGM-140 Army Tactical Missile System (ATACMS), and the Chinese. China is not competing with us in this area, for the simple reason that we have basically withdrawn, and did not export SRBM systems to Syria, or elsewhere. Incidentally, Ukraine may prove to be a conditional competitor for us with their Grom SRBM, whose development is being financed by Saudi Arabia. Here it would be more correct to talk about the sale of technology, rather than a finished system."

© Wikipedia
ATACMS Army Tactical Missile System
© Sputnik / Kirill Braga
Russia's TOS-1A 'Sunheat' Heavy Flamethrower Just Nearly Doubled Its Range
At the same time, Frolov pointed out that multiple rocket launcher systems (MRL/MRLS) "are now actively replacing tactical missile systems on the market, because they have almost the same range. For example, the Belarusian MLRS Polonaise, created with China's help, is comparable in its characteristics to the export version of the Iskander SRBM. Meanwhile, Russia has actively marketed the Smerch MLRS, selling it, for example, to Azerbaijan and Algeria."

Finally, China expert Vassily Kashin told the online paper that all discussion regarding the Dongfeng 12's characteristics remains little more than speculation. Moreover, the analyst noted, the system may actually turn out to be a platform for launching a variety of weapons, from SRBMs to supersonic cruise missiles and heavy MLRS.

Kashin stressed that "China's missile industry is factually the most dynamic branch of their military industrial complex. In this area the Chinese stopped copying foreign models fairly early on. They generally regard ballistic missiles as a priority, since their development allows them to compensate for the relative weakness of its aircraft in relation to the US. Their export potential is fairly large too."