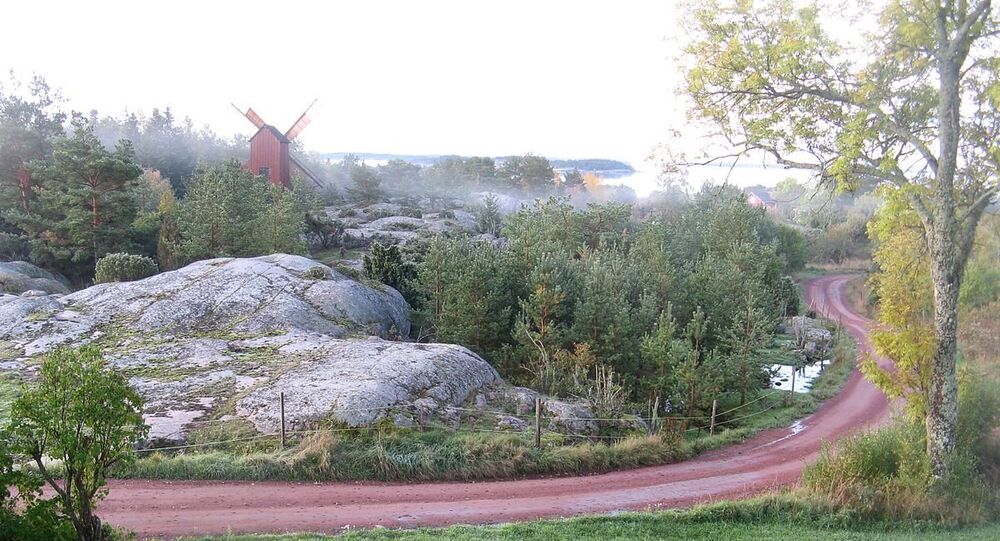 The rising tide of war paranoia and anti-Russian sentiment which has swept across Scandinavia seems to have reached Finland. Taking its cues from Sweden, Helsinki is considering re-arming the Åland Islands, which have been demilitarized for 160 years.

© AP Photo / RONI LEHTI / Lehtikuva via AP, FILE
Finland Steps Up Defense Cooperation With US, Eyes NATO Membership
On Saturday, Finnish Defense Minister Jussi Niinistö of the Finns Party called for a revision of the demilitarization of Åland in the context of the ongoing discussion about defense cooperation between Finland and Sweden, Finnish national broadcaster Yle reported. Earlier this year, Stockholm launched a comprehensive remilitarization of the island of Gotland in the Baltic Sea. In September, Gotland saw Swedish soldiers set foot on the island for the first time since 2005.

Finnish Defense Minister Niinistö has estimated that the 1856 demilitarization of Åland had a detrimental effect on Finland's ability to defend the archipelago, something that several security experts agreed upon. At the time, Finland was ruled by the Russian Tsar and the archipelago was demilitarized as a concession to Russia's Crimean War foes; the island's 1830's-era defenses had been destroyed by British and French warships in 1854.

Researcher Jukka Tarkka, a PhD in political science, was by his own admission delighted with the fact that Niinistö "does not seem to be afraid."

Tarkka's assessment was echoed by Charly Salonius-Pasternak, a researcher at the Finnish Institute of International Affairs.

"Niinistö made some good remarks about Åland. No country would be willing to approve of a defense obligation with similar limitations when it comes to preparations," he tweeted on Sunday.

Both Salonius-Pasternak and Tarkka have regularly commented on the position of the Åland Islands. According to Tarkka, Åland, which is located in the Baltic Sea halfway between Sweden and Finland, would be a priority for any nearby military power in the event of a conflict in the Baltic Sea Region. Salonius-Pasternak reportedly advocated changes in Åland's demilitarized status because of "recent changes in Finland's security environment."

© AFP 2021 / PAUL MADEJ / SCANPIX
Milking It: Sweden Benefits From Own Psychological Warfare
This rhetoric is similar to that used by Sweden regarding Gotland, where troops were permanently stationed after a decade of demilitarization due to "global developments in general" and "Russia's actions in particular." Unsurprisingly, talks of Åland's remilitarization were met with cheers in Sweden.

"If it were in Russia's interest to establish a Russian presence on Åland with long-range high-precision weapons, there is obviously a big risk that it would be done," Swedish defense committee chairman Allan Widman told the Swedish tabloid newspaper Expressen. "Åland, Gotland and Bornholm [a Danish island] all are of strategic interest for those who wish to control the supply of military equipment to the Baltics. In this way, I understand the Finnish Defense Minister's worries," Widman said.

With a population of roughly 30,000, Åland is the only region of Finland where Swedish is the official local language. Following the break-up of the Russian Empire, sovereignty over Åland was retained by Finland, despite the residents' almost unanimous desire to be incorporated into Sweden. By law, Åland is politically neutral and entirely demilitarized; its residents are exempt from conscription to the Finnish Defense Forces and enjoy a broad autonomy.

Barefoot in the Aland Islands: find out why I fell in love with this hidden gem https://t.co/FhPprdZOTC @visitaland pic.twitter.com/sSv5qEbSjy

© AFP 2021 / OLIVIER MORIN
Swedish Greens Hope to Beat Putin With Renewable Energy
In 1922, an agreement on the demilitarized and neutral status of the islands was signed by members of the League of Nations (the UN's predecessor). Later, a separate agreement was concluded between Finland and the Soviet Union in 1940. Since then, a consulate of the Soviet Union and later Russia has been present in Saltvik, Åland, to oversee Finland's obligations regarding the island's demilitarization.