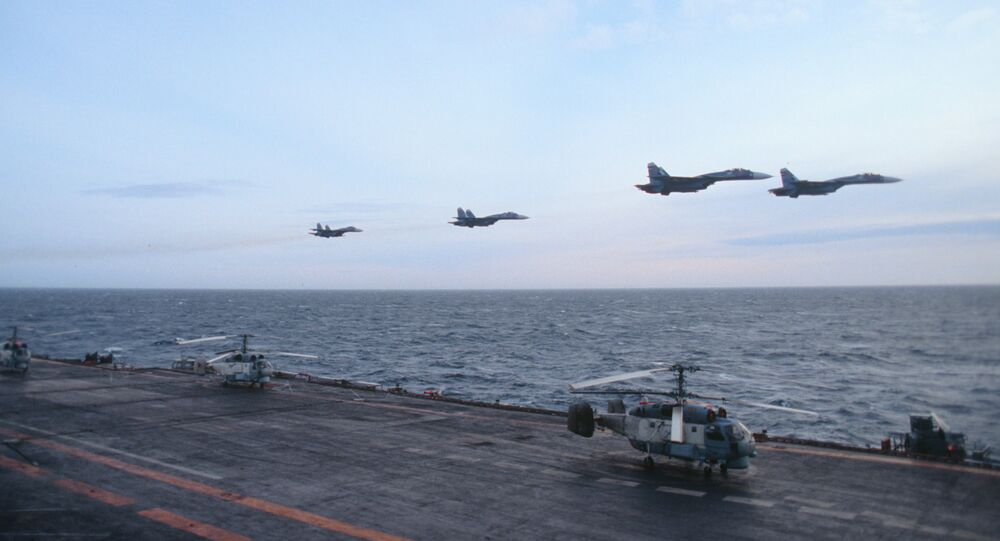 On Saturday, the Russian Northern Fleet announced that a group of warships led by the Admiral Kuznetsov aircraft carrier, armed with a full complement of weaponry and aircraft, has left its home port to join the Russian anti-Daesh military operation in Syria.

© Sputnik / Alexei Danichev
Russian Northern Fleet Warships to Practice Anti-Terror Operations in the Med
The Admiral Kuznetsov left its port at Severomorsk at 3pm Moscow time, beginning the long journey through the northeast Atlantic and into the eastern Mediterranean Sea. The carrier, officially classified by the Russian Navy as an aircraft carrying cruiser, is accompanied by the Kirov-class heavy missile cruiser Pyotr Velikiy, the Vice Admiral Kulakov and Severomorsk destroyers, and several supply ships.

The warplanes aboard the Admiral Kuznetsov include carrier-based variants of the Su-33 air superiority fighters and Ka-27/Ka-29 ASW helicopters. Last month it was reported that the Su-33s would be equipped with an ultra-precision targeting system, the SVP-24, already successfully used by other aircraft in Russia's year-long anti-terrorist operation in Syria.

Four MiG-29K multirole fighters have also been added to the ship's roster, along with several Ka-52K reconnaissance and combat helicopters. The latter were originally designed for operations aboard French-built Mistral-class amphibious assault ships, whose delivery Paris postponed and then canceled in 2014. The choppers are equipped with precision-guided air-to-air and air-to-ground missiles, as well as unguided bombs and automatic cannon.

As for the MiGs, they are expected to use smart bombs from the KAB-500 family using the Glonass satellite navigation system, and can also be equipped with Kh-35 subsonic anti-ship missiles.

The Admiral Kuznetsov, built at the Black Sea Shipyard in Mykolaiv, Ukraine in 1985, is 306 meters long, 75 meters wide, and has a displacement of 60,000 tons. In 2012, the ship entered the Sevmash shipyard in Severodvinsk for a comprehensive refit and modernization, completed just prior to its deployment to the Mediterranean. The ship has a maximum cruising range of 8,417 nautical miles (over 15,000 km), and is crewed by 1,960 servicemen, including 518 officers and 210 warrant officers.

© Sputnik / Sergey Eshenko
Aircraft carrier Admiral Kuznetsov, seen here in February 2016, undergoing comprehensive repair and refit at the Sevmash shipyard at Severodvinsk, northern Russia.
© Sputnik / Grigoriy Sisoev
Russia to Establish Naval Base in Tartus, Syria - Deputy Defense Minister
Last month, Defense Minister Sergei Shoigu announced that Russia would send a group of ships led by the Admiral Kuznetsov to the Mediterranean to bolster Russian naval capabilities in the region. As of last month, the Russian naval group in the eastern Mediterranean consisted of six warships and three or four support vessels at any one time. On October 6, the small missile corvette Mirazh, armed with Kalibr cruise missiles, left Sevastopol for Syrian shores. Three days earlier, two more small corvettes, the Serpukhov and Zeleniy Dol, left the Black Sea for deployment in the Mediterranean.

While en route to its main target – Daesh terrorists, the Admiral Kuznetsov is expected to join up with a nuclear submarine, as well as Tu-160 long-range strategic bombers, for anti-piracy and anti-terror exercises. The anti-Daesh operational deployment will be historic, in that it will be the first combat deployment of a Russian or Soviet aircraft carrier.