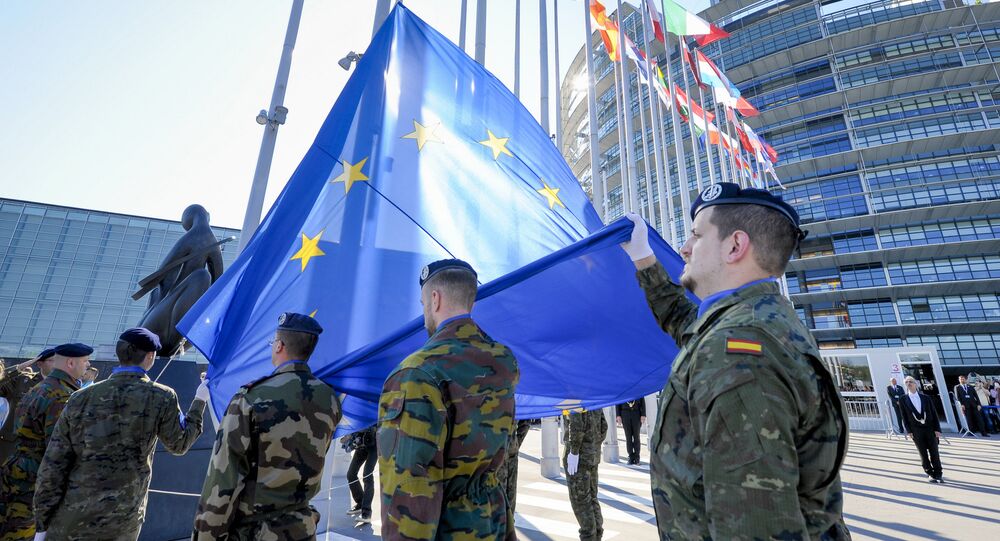 Europe to Increase Military Spending in Face of Growing Threats

Western European defense spending is set to rise after six consecutive years of cuts, according to a new study by a major military think tank. The researchers said Europe can no longer ignore the growing threats of Islamist terror, as well as border security issues influenced by Europe's migrant crisis.

© Photo : Pixabay
'Costly Affair': Europe 'Has No Money to Create Common Army'
Western European nations are to increase their military investment by over 1 percent in 2016. That's according to the International Institute for Strategic Studies (IISS), an influential global think tank researching political & military conflict, based in London.

It marks a significant break from the past. EU member states spending on the military in 2015 totalled US$223 billion, almost 15 percent smaller than in 2007.

The researchers point to the very public fallout in the wake of terrorist attacks such as the bombings and shootings in Paris last November and the Brussels airport bombing in March.

European leaders like French President François Hollande faced angry accusations that he had not done enough to prevent the recurrence of such attacks.

In the IISS report on military strategy and spending in Europe, the think tank noted that not since the Cold War, has European security become such a priority for European policy makers.

"Across the continent, policymakers were in 2015 preoccupied with the uncomfortable reality that while the threats and risks to European security had increased during recent years, the means to address them had not recovered from the long cycle of defense cuts that began after the Cold War and accelerated after the 2008 financial crisis."

© Photo : Pixabay
More 'Lone Wolf' Attacks Likely in Europe Amid Intel Chaos - Expert
The report added that the proliferation of Daesh, also known as IS/ISIL, and so-called "lone wolf" terror attacks has "brought conflict and a disregard for the established principles of peace and security back to a continent where it was thought that such issues were a feature of the past."

"The Islamic State of Iraq and al-Sham (ISIS) counts among its personnel many foreign fighters, thousands of whom hold Western passports. Returnees, now trained and experienced, constitute a terrorism threat to Europe."

Another key dilemma influencing the recent increase in military and security spending, is Europe's ongoing migrant crisis. More than 1.5 million people arrived in Europe in 2015 alone, many being refugees fleeing death and persecution in conflict zones such as Iraq and Syria.

"Continuing conflict in Africa and the Middle East has led to significant refugee flows, as countries in the region edge towards failure and collapse," the IISS report noted.

Indeed, as Federica Mogherini, the EU's High Representative for Foreign Affairs and Security Policy, argued in May 2015:

"The security situation in the EU's direct neighborhood has deteriorated significantly: the concurrency, intensity, frequency and complexity of conflicts and crises in the neighborhood have increased'.

2016 has also brought the challenge of the UK's impending exit from the EU. Currently, the UK and France are Europe's only nuclear states. Without the UK, France will have to shoulder the burden of being the EU's only full-spectrum military power. The UK's exit also robs the bloc of its biggest-spending military force.

Three months after the UK voted for Brexit, EU Commission president Jean-Claude Juncker, indicated he wants to press ahead with proposals for an EU Army, supported by the defense ministers of Spain, Germany, Italy and France. However, it is deeply controversial to many members, including the UK. There are concerns an EU Army may undermine and take away resources from NATO, which the UK remains a member of.

EU defense ministers are expected to hold talks on the defense plans in Brussels in November, before presenting a more detailed strategy to EU leaders at a summit in December.