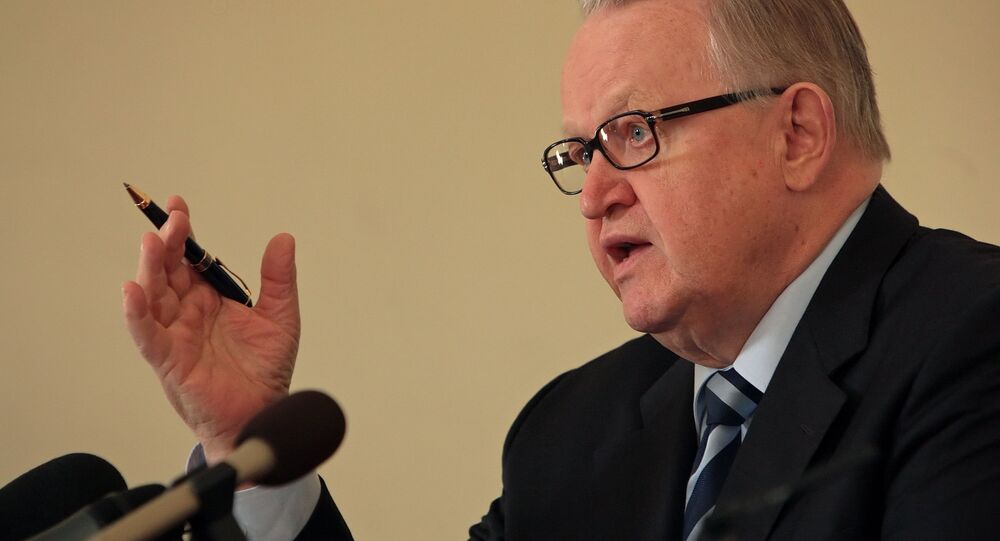 With a debate about joining NATO flaring up in both Finland and Sweden, so far the only remaining non-aligned Nordic countries, Finnish Nobel Peace Prize winner and former President Martti Ahtisaari joined the ranks of NATO supporters by openly advocating for Finnish membership.

© REUTERS / Soren Andersson/TT News Agency
Spooky Stories: Danish Security Expert Dispels Nordic Fear of Russia
Unlike Finland's incumbent President Sauli Niinistö, who remains sitting on the fence in the heated NATO debate, Martti Ahtisaari believes it is time for Finland to become a member of NATO. Furthermore, Helsinki need not wait for Stockholm to make this committal move and should act first.

Ahtisaari's recent book called "Miten tästä eteenpäin" ("The way ahead") investigates Finland's security. The book was penned in cooperation with diplomat and security expert Jaakko Iloniemi and Tapani Ruokanen, former chief editor of the Suomen Kuvalehti magazine — all Social Democrats politicians with impressive careers spanning from the President Urho Kekkonen-era in the 1970s.

Contrary to many Nordic security pundits who ascribe imminent NATO membership to the fictitious Russian "threat," Ahtisaari's logic is quite different.

© Flickr / U.S. Pacific Command
Finnish Bread Buttered on Both Sides: Yes to US Exercises, No to NATO
In the book, Ahtisaari expresses his strong distrust for Sweden's and Finland's mutual vows of common policy on NATO. Earlier this year, a Finnish government report suggested that Finland and Sweden should maintain a coordinated NATO policy, that is either both join the alliance or keep out of it. According to Ahtisaari, Finland should join the military alliance before Sweden, which is bound to follow suit the same sooner or later.

"We should leave the Swedes behind us, and do as they did when they started negotiating EU membership behind our back," Ahtisaari wrote in one of the book's chapters.

Remarkably, Ahtisaari himself let go of the opportunity to join NATO during his tenure as Finnish president (1994-2000). By Ahtisaari's own admission, it seemed "impossible" at that time. During his time as Finland's president, Ahtissari dismissed the so-called "NATO option" as an illusion, making an analogy to trying to obtain fire insurance when the fire has already started. However, Ahtisaari subsequently changed his tune. In 2014, he insisted that joining NATO would increase the international community's confidence in Finland.

​During the later stages of his political career, Ahtisaari became a vocal opponent of Finland's decade-long policy of maintaining formal independence while also being strongly influenced by its eastern neighbor the Soviet Union, internationally known as "Finlandization." This policy originated after World War II, after being formulated by President Juho Kusti Paasikivi, who emphasized the necessity to maintain a good and trusting relationship with the Soviet Union. In later years, it was maintained by Paasikivi's successor Urho Kekkonen.

© Flickr / Latvijas armija
Not Without My Neighbor: Finland, Sweden Ponder NATO Membership, Again
​In 2008, Ahtisaari was awarded the Nobel Peace Prize for his international diplomatic efforts in Namibia, Kosovo and Iraq, among others. Finland's Former Foreign Minister and UN ambassador Keijo Korhonen, who was strongly against awarding the prize to Ahtisaari, wrote a critical letter to the Nobel Committee. According to Korhonen, Ahtisaari did not deserve the prize, as he suffered from "lack of morality" and "enriched himself" on peace missions.

Earlier this year, Ahtisaari stated that only Russia and the US are capable of solving the Syrian crisis and advocated lifting the sanctions off Russia.