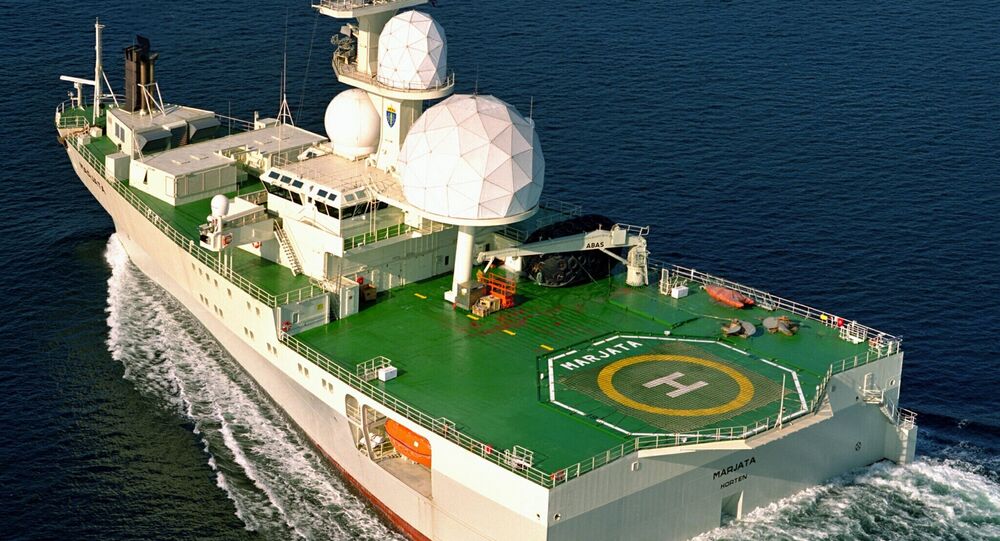 The Nordic states have been pouring billions into their militaries, citing an imaginary Russian "threat." For the first time in history, Norway possesses two spy ships due to an unprecedented measure. It insists these are necessary due to Russia's accumulation of forces and increased activity in the North.

© Sputnik / Alexandr Kryazhev
Whenever Swedish Air Space Gets Violated, Russians Get the Blame
Russia's refurbishing of military bases and civil infrastructure along the Northern Sea Route from Murmansk to the Far East has prompted the Norwegian Intelligence Service to believe it needs more monitoring capacity; Norway claims the two spy ships it has are insufficient. Both of Norway's intelligence collection ships will be sent into the high Arctic to gather data on Russia's military maneuvers.

In a few months, the FS Marjata will therefore keep company with the ship it was originally supposed to replace, which has been renamed the FS Eger after receiving a full overhaul and becoming modernized. Both reconnaissance ships are heading to neutral waters in the Norwegian Sea and the Barents Sea, but will be tasked with monitoring Russian activity exclusively.

"Norway's role as a monitor in the North, also on behalf of NATO, is becoming increasingly evident. This strengthens Norway's part and guarantees that our allies will come to our assistance in the event of a conflict. Intelligence is political capital," Norwegian newspaper Aftenposten's commentator Per Anders Madsen wrote.

​According to Lieutenant General Morten Haga Lunde, the chief of the Norwegian Intelligence Service (NIS), the FS Eger will be tasked with following activity on the surface, such as civil and military transport, including activity in the air and underwater. The FS Marjata, which has a far greater capacity than its predecessor, will patrol in the eastern part of the Barents Sea and possibly keep an eye on Russian military bases on the Kola Peninsula. The FS Eger will be based in Harstad, while the FS Marjata's home base will be Kirkenes.

"It's like buying a new computer. There is a generation difference here," Morten Haga Lunde told Norwegian newspaper Aftenposten.

© REUTERS / Soren Andersson
Sweden Puts on War Paint, Prepares for Highly Unlikely Russian Invasion
Haga Lunde admitted that maintaining the two ships was not part of the original plan, as the old FS Marjata (today the FS Eger) was initially scheduled for scrapping. Subsequently, Norway's military bosses changed their mind. The FS Marjata was fitted with new material in the United States, while the FS Eger is to be updated in Norway. Haga Lunde refrained from commenting on the overall price tag, but ensured that both will be operated via the Intelligence Service budget, which has been increased.

According to Haga Lunde, both ships will be used for as long as possible in a hybrid war, yet will be withdrawn in the event of a real war.
The FS Marjata is the fourth spy ship of its kind. Its predecessors have been operated by the Norwegian Intelligence Service since the days of the Cold War. The fourth model of the reconnaissance ship is 126 meters (413 feet) long and 23.5 meters (77 feet) wide.

© AFP 2020 / LAURA bUCKMAN
Norway Bets on F-35 to Attack Targets in Russia
​A report by the NIS earlier this year stated that Russia was no immediate threat to Norwegian security. However, Russia's increased presence in the north and the upgrading of its military power was estimated to have given the country a greater ability to influence Norway's freedom to act in the high north.

Earlier this year, a classified government analysis identified Russian warships and fighters as potential targets for the Norwegian fleet of F-35s.