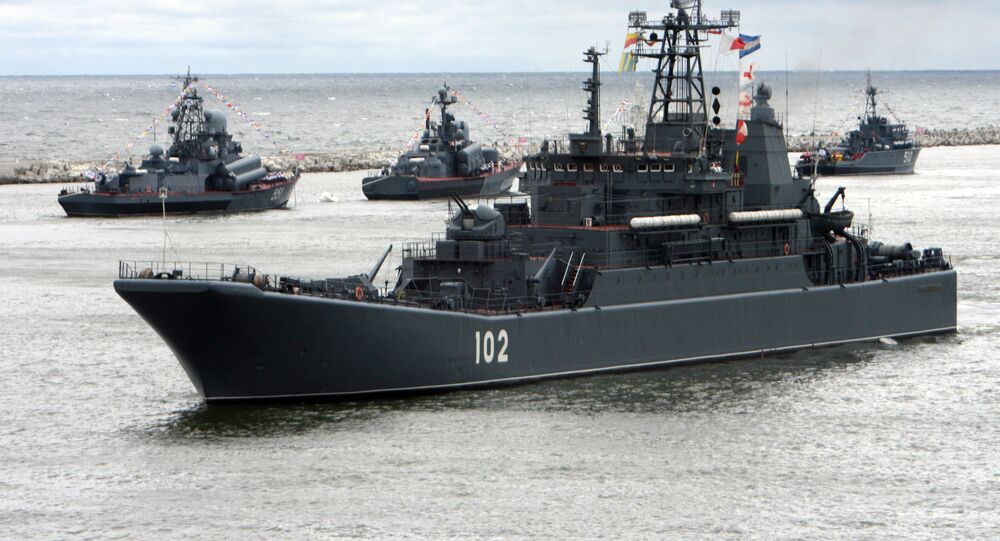 Earlier this week, Russia's Defense Ministry announced that the Admiral Kuznetsov aircraft carrier, commissioned in 1990 but recently modernized and completely reequipped, would head to the Mediterranean to fight Daesh in Syria. But what about the Navy's newer ships? What kinds are there and when were they built? Sputnik takes a look.

The Admiral Kuznetsov aircraft carrier (classified as a heavy aircraft-carrying missile cruiser by the Russian Navy) was among the last of the Soviet Navy's giants, laid down in December 1982 and commissioned in December 1990. Entering the Severodvinsk Sevmash shipyard for a comprehensive refit and modernization in late 2012, the ship's upgrade will soon be completed, and it will head to the Eastern Mediterranean at the end of the month to support the ongoing anti-Daesh operation in Syria.

The Admiral Kuznetsov's refit has been characterized as a 'mid-life modernization'. But what about Russia's newer ships? In the 1990s, the Navy faced tough times, along with the rest of the armed forces and the country as a whole. However, beginning in the 2000s, things gradually began to change for the better, and the Navy began receiving new vessels again.

Sputnik takes a look at a baker's dozen of the Russian Navy's latest and best new surface ships and submarines.

First up is the Project 1161K frigate Tatarstan. Launched in August 2003, the Gepard-class frigate was built at the Zelenodolsk Shipyard, becoming the flagship of the Caspian Flotilla after its launch. The 1,500 ton, 102 m long ship became a symbol of the drive to reactivate projects which had been frozen since the end of the Soviet period. Laid down in 1991, work on the ship was suspended in 1995 due to lack of funds. But the ship was finally completed in 2003, equipped with modernized radar and electronic warfare systems, and armed with two-quadruple Kh-35 anti-ship missile launchers, the Osa-M SAM system, point defense and multipurpose machine guns, four 533 mm torpedo tubes, an RBU-6000 12-barreled anti-submarine rocket launcher and a complement of mines.

NewsTeam
The Tatarstan (left), along with its sister ship, the Dagestan.

Next up is the K-535 Yuri Dolgorukiy, the lead ship of the Borei-class of ballistic missile submarines. Laid down in November 1996, the 4th-generation nuclear sub was finally launched in February 2008, joining the Northern Fleet.  The sub is equipped with 16 Bulava submarine-launched ballistic missiles, a new class of nuclear missiles introduced in 2013. Its armament also includes 6 RPK-2 Vyuga cruise missiles for defense against enemy subs.

After that is the K-329 Severodvinsk, a nuclear attack submarine laid down in 1993, but only launched in June 2010 after work was halted for nearly two decades due to insufficient funds. The fourth-generation sub, equipped with 10 533mm torpedo tubes, is capable of firing the P-800 Oniks, Kalibr, Kh-101/Kh-102 and 3M24 anti-ship and cruise missiles. The Severodvinsk serves in the Northern Fleet.

The K-550 Alexander Nevsky strategic nuclear missile sub, the second Borei-class vessel to be completed, was laid down in March 2004, and launched in December 2010, becoming part of the Pacific Fleet.

© Sputnik / Ildus Gilyazutdinov
Crew of the Alexander Nevsky nuclear submarine topside at a welcome ceremony for the Navy's new Borei-class project 955 vessel at Kamchatka's Vilyuchinsk base.

The Project 11661K frigate Dagestan, sister ship to the Tatarstan, laid down in 1994, was commissioned in November 2012, joining the Caspian Flotilla.

Next up is the Vladimir Monomakh, the third of the fourth-generation Borei class subs to be built, laid down in March 2006 and finishing its sea trials in late 2013. The ship is part of the Northern Fleet.

​The Grad Sviyazhsk and Uglich, ships from the Buyan-M class of corvettes (aka small missile ships), are among the newest corvettes available to the Russian Navy. Launched in March and April 2013, the ships are part of the Caspian Flotilla. The ships became famous around the world in October 2015 when they launched Kalibr cruise missiles at terrorist targets in Syria. The missiles flew nearly 1,500 km over Iran and Iraq to strike their targets. The small ships, equipped with modern radar, fire control, sonar and electronic warfare systems, are equipped with a retractible Grad-M multiple rocket launcher, 2 launch cells for Kalibr-NK cruise missiles, 2 Komar SAMs, and a DP-65 anti-saboteur grenade launcher, along with onboard machineguns.

The Project 11356 Admiral Grigorovich frigate, built at the Yantar shipyard in Kaliningrad, joined the Black Sea Fleet in March 2014. The 3,600 ton, 124 m long frigate with a range of up to 4,850 nautical miles is equipped with a full complement of advanced radar, fire control and electronic warfare systems. The ship is armed with the A-190 Arsenal 100mm naval gun, VLS cells for Kalibr and Oniks cruise and anti-ship missiles, 3S90M Shtil-1 SAMs, 2 Kashtan close-in defence gun-missile system platforms, 2x2 533 mm torpedo tubes and the RBU-6000 213 mm anti-sub rocket launcher. The ship can carry a Ka-27PL or Ka-31 anti-sub/early warning helicopter.

The Buyan-M class small missile ship Velikiy Ustyug, launched in May 2014, and joining the Caspian Flotilla, also participated in the Syrian Kalibr strikes.

The Admiral Essen, the second Admiral Grigorovich-class frigate to join the Russian Navy, became part of the Russian Black Sea Fleet in November 2014. It was followed by its sister ship, the Admiral Makarov, launched in September 2015.

Last but certainly not least is the Project 21180 icebreaker Ilya Muromets. Released from its drydock in June 2016, and set to be completed in the water, the new generation diesel-electric icebreaker, built by the Admiralty Shipyards in St. Petersburg, is expected to be finished by late next year. It will be the first new icebreaker for the Navy in over 40 years. With a range of 12,000 nautical miles and the capability to remain autonomous at sea for up to two months at a time, the ship will be able to plow through ice up to a meter thick. The transport will be used to deliver supplies to remote military installations in Russia's north.