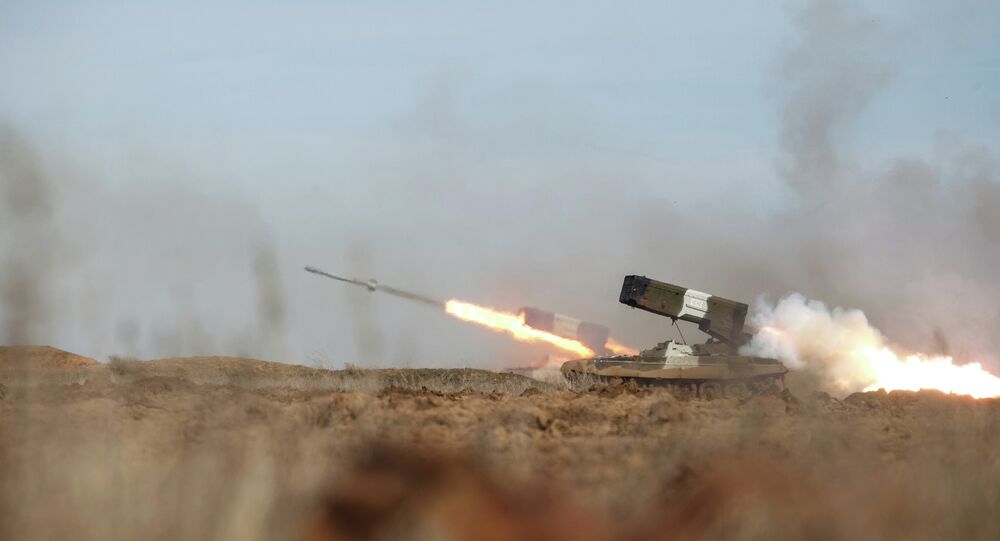 The TOS-1A Solntsepyok ('Sunheat') heavy flamethrower needs little introduction. The system has been successfully deployed by the Syrian and Iraqi armies against Daesh (ISIL/ISIS) terrorists. Now, the system has become even more deadly, with testing of new shells which would nearly double the system's range entering its final stages.

On Wednesday, Izvestia reported that Splav Holding, a company specializing in the development of shells for tube-based artillery systems, was carrying out testing of a new extended-range shell for the TOS-1A together with the Defense Ministry.

A Defense Ministry source explained to the newspaper that "testing of the newest rockets is ongoing," and is expected to be completed "by the end of the year."

© AFP 2021 / TOFIK BABAYEV
Over 500 Types of Russian Weaponry to be Showcased at ADEX Expo
The official explained that reengineering involving reductions in the weight and size of the new projectile compared with its predecessor, the M0.1.01.04M, allowed designers "to not only increase the range [of the system], but also the power of its thermobaric warhead munition."

The current effective firing range of the existing TOS-1A system is 6 km. The new shell will increase that to 10 km, that is, by 40%. The improved range is expected to be achieved in part via a new fuel/explosive mixture inside the shell.

The system has gained fame around the world in recent years, having been used to high effect in Iraq and Syria to destroy terrorist fortifications, troops and armored vehicles.

© Sputnik / Alexander Vilf
Syria Fires TOS-1A Solntsepyok Flame-Thrower Against ISIL MIlitants (VIDEO)
Speaking to Izvestia, military historian Alexei Khlopotov clarified that while "Solntsepyok is often mistakenly called an artillery system, in fact the system is an Assault Tank, operating alongside infantry formations. It's for this reason that its launchers are armored, and mounted on the chassis of [T-72 and T-90] tanks."

Explaining the need for the new long-range projectile, Khlopotov noted that "the experience of modern warfare has shown that the increased range of anti-tank systems makes the TOS-1A highly vulnerable. For this reason, they must be withdrawn from the forward edge of the battle area."

"Here," the expert emphasized, "it is worth taking into account the experience of the ongoing military operations in Syria, where insurgents have extensively used captured Cornet [anti-tank] systems, which have a maximum range of 5 km, comparable to the range of the [TOS-1A] heavy flamethrower systems." In effect, the new shell will enable the tank to operate outside the range of enemy anti-tank systems.

© Sputnik / Alexey Malgavko
Russia's TOS-1 Flame Thrower is Second to None in the World
Still, the development of the new shell definitely does not mean that the old one will no longer find its uses. Respected military analyst and retired Colonel Viktor Murakhovsky explained to Izvestia that expanding the range of the TOS-1A's projectiles also means an increased dead zone – that is, the area around the system from which it is not possible to attack close-range targets.

The dead zone of the new 10 km rocket is 1.6 km, compared with one as low as 400 m for its predecessor. In other words, the older M0.1.01.04M projectile will definitely continue to be used, particularly in cramped combat environments. For longer range fire, Russia has the Smerch MLRS system, capable of firing between 70-90 km, (120 km with the 9M542 increased-range missile). That system has a dead zone of 20-25 km, meaning the TOS-1A, with or without its upgraded projectile, will definitely have its own niche.