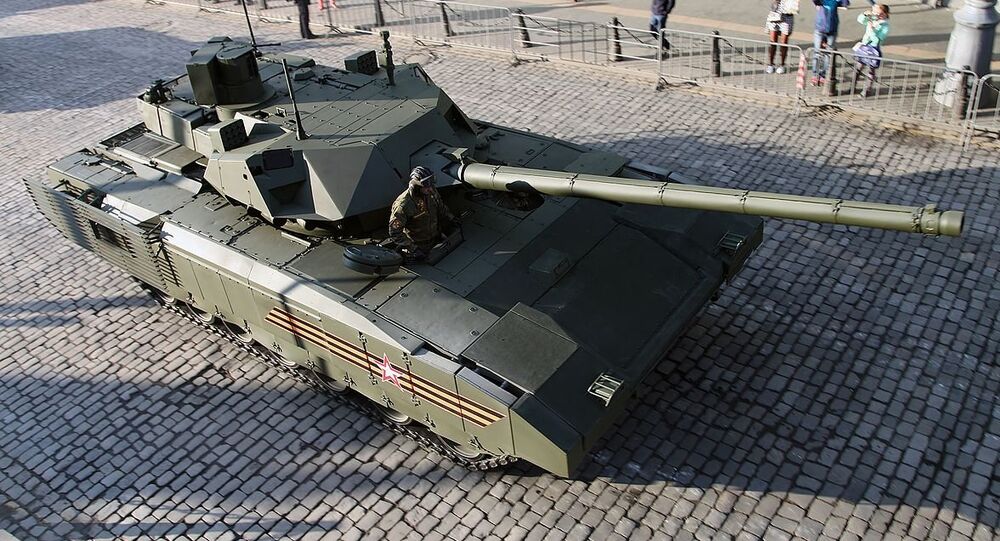 © Sputnik / Evgeny Biyatov
Cloak of Darkness: Russia Testing Unique Smokescreen for Armata Tanks
The Afganit active protection system Russia uses to shield its tanks is capable of protecting an armored vehicle from various types of anti-tank rockets and grenades, incoming from all directions.

Now however, scientists from the KBP Instrument Design Bureau have taken it to a whole new level by making the Afganit system capable of intercepting and destroying depleted uranium armor-piercing discarded sabot shells (APDS), according to the Russian newspaper Izvestia.

Depleted uranium shells were revealed for the first time by the United States during the first Gulf War. The use of uranium, a heavy element, in shells fired from US M1A1 Abrams allowed them to literally rip Iraq's Soviet-era T-55, T-62 and T-72s tanks to shreds. However, this victory came at a cost: the radioactive metal had toxic effects on both its handlers and the environment. Nevertheless, the Pentagon and its NATO allies continue to employ the use of these munitions and contend that doing so is completely safe.

"The first APDS core interception tests were conducted this year. The new (active protection) system was able to handle even such difficult targets, despite the fact that intercepting an APDS was previously considered impossible. Special attention was paid to dealing with depleted uranium APDS cores employed by the NATO countries’ armored forces. We’re currently working on further upgrading the system and improving its computer algorithms responsible for intercepting targets," a source in the Defense Ministry privy to the system tests’ progress said.

The Afganit active protection system is complex defense mechanism developed by the KBP Instrument Design Bureau. The system employs a combination of active phased antenna array radars and UV detectors to identify and track incoming projectiles, and mini-mortar systems which use fragmentation rounds to intercept and destroy incoming threats in mid-flight.

The Afganit system is employed by T-14 Armata main battle tanks and T-15 heavy infantry fighting vehicle based on the Armata Universal Combat Platform, though some of its components are also used by several other types of Russian armored vehicles.