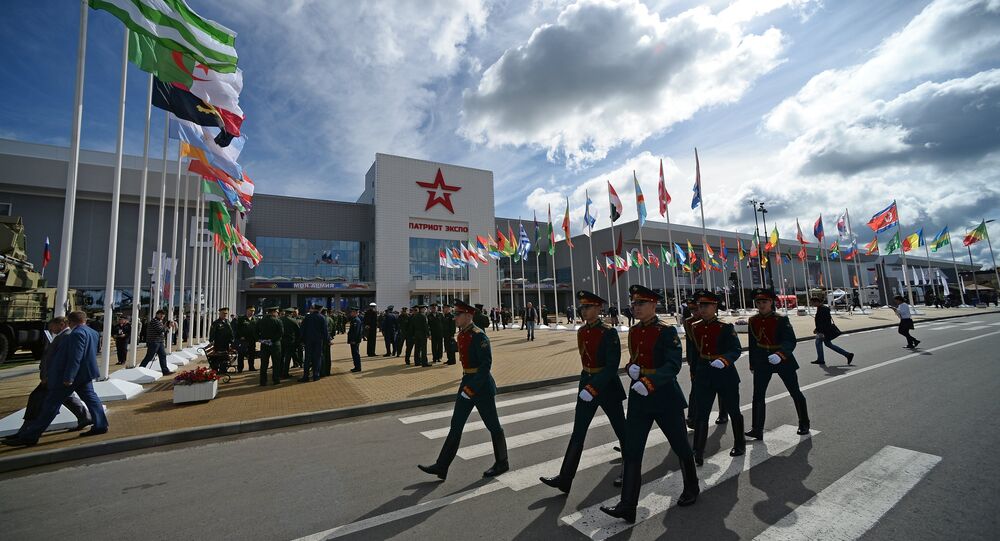 Summarizing results of the six-day Army-2016 international military exhibition which wrapped up outside Moscow on Sunday, independent journalist and geopolitical analyst Dmitri Pskezin explained the three goals reached by Russia and its defense industry through the show.

In his analysis, published by the independent online news and analysis resource PolitRussia, Pskezin explained what these three goals were. First and foremost, the exhibition showed off the latest and greatest Russian firepower, with over half a million people, including foreign observers from dozens of countries, attending the expo over its six days. Second, the event demonstrated Russia's real and soon-to-be-real defense potential, both to friends and to would-be enemies. Finally, the defense forum helped boost the coffers of the Russia's defense industry, which received numerous new contracts based on the new weapons displayed at the show.

© Sputnik / Alexey Filippov
Top Guns: Ten Brand New Weapons Russia Unveiled at Army-2016 Military Expo
In terms of attendance, the exhibition, which is only in its second year, was an undeniable hit – one not matched even by many military expos with a much longer and prouder history. This success, Pskezin suggested, had everything to do with organizers' efforts to take account of attendees' interests based on last year's forum.

This included a special, 17 hour program showing actual combat models in operation, rather than mere dummy models on a stand. Participants were able "to not only touch, but also see the weapons in action," the journalist explained.

"And attendees certainly had a place to roam" at the Albino range and the Kubinka airfield, Pskezin added. "The static exposition alone covered over 500,000 square meters. 250 pieces of military and specialized hardware were put on display here for viewing. 1,000 for enterprises from the Russian defense industry offered over 11,000 exhibits, showing off everything from ammunition to ships."

© Sputnik / Alexei Filippov
The Army-2016 forum, organized by the Russian Defense Ministry, which ran between September 6 and 11. The forum was held in the military-themed Patriot Park in Kubinka outside Moscow and at numerous sites throughout Russia's military districts.

At the same time, nearly 250 pieces of equipment came alive to demonstrate shooting, blowing things up, flying, swimming or overcoming obstacles, including in coordination with one another.

Meanwhile, the journalist noted that while "some attendees came to the show to play around and have fun, many others were here on business. Russian military personnel looked closely at the latest hardware; so too did foreigners. There were more of them here this year than the year before. On the fields of the forum there were the representatives of over 80 countries. 35 were represented by an official delegation, headed by a defense minister, the chiefs of general staff or a deputy defense minister."

© Sputnik / Georgiy Zimarev
‘Super Modern, Ideal’: Vietnamese Reps Wowed by Russian Police, Security and Military Gear at Army-2016 Expo
And choosing between the forum's many offerings was no easy task, either, Pskezin explain, given the huge range of new and innovative products. "For example, Bauman Moscow State Technical University developed a simulated 125-mm tank shell with no analogue in the world. The shell allows the learning process of tank crews to be brought as close as possible to battle conditions. Made of plastic, the shell is atomized as it flies toward its target, and a sheaf of markers indicates where the tank is hit. With the help of such shells it's possible to arrange a kind of tank paintball."

And that's just one example among dozens of new systems and innovations displayed at the show.

In terms of the show's material payoff for its organizers, this came via the interest of foreign governments, "reflected through the signing of major contracts. Foreign buyers conducted over 50 meetings and negotiations with Russian Defense Ministry leaders and representatives from the country's defense industry. The result was 17 government contracts worth over 130 billion rubles [nearly $2 billion US]."

The defense order, Pskezin calculated, "includes the delivery of six Project 636 submarines, three Project 21631 small missile ships, as well as the supply and modernization of over 230 pieces of military hardware."

And Russian producers were not alone, either on the fields or in the display stands, with Belarus, Kazakhstan and Armenia, as well as Pakistan and Malaysia, featuring their own national exhibitions, and 58 other foreign companies (double last year's figure) coming to the show with their own offerings, with firms from Germany, China, India, Israel, France, Switzerland, Ireland, and Thailand in attendance.

No defense forum would be complete without the discussion of new ideas in military-technical thought, with Army-2016 organizing over 100 round tables, briefings and conferences in 24 thematic areas. "All-in-all, 12,000 experts from 18 countries took part in the open part of the scientific and business programs," Pskezin noted.

© Sputnik / Alexei Filippov
Army Expo 2016 Showcases Russia's Success at Military Diplomacy
Summarizing the results of Army-2016 on Sunday, Defense Minister Sergei Shoigu said with satisfaction that the forum quickly turned from a newcomer "into one of the world's leading exhibitions of arms and military equipment" in the space of two years.  "The forum became an effective form for creating synergy between the state and representatives of the business community – an effective mechanism of integration in the production of the latest scientific developments. I believe that the main goal of the forum has been reached."

Indeed, Pskezin noted, Russia and its defense companies accomplished what they set out to do – which was a) to attract Russian and foreign attention, b) to show off the country's defense and defense research potential, and c) to give companies' coffers a boost through new contracts from foreign buyers. In other words, mission accomplished.