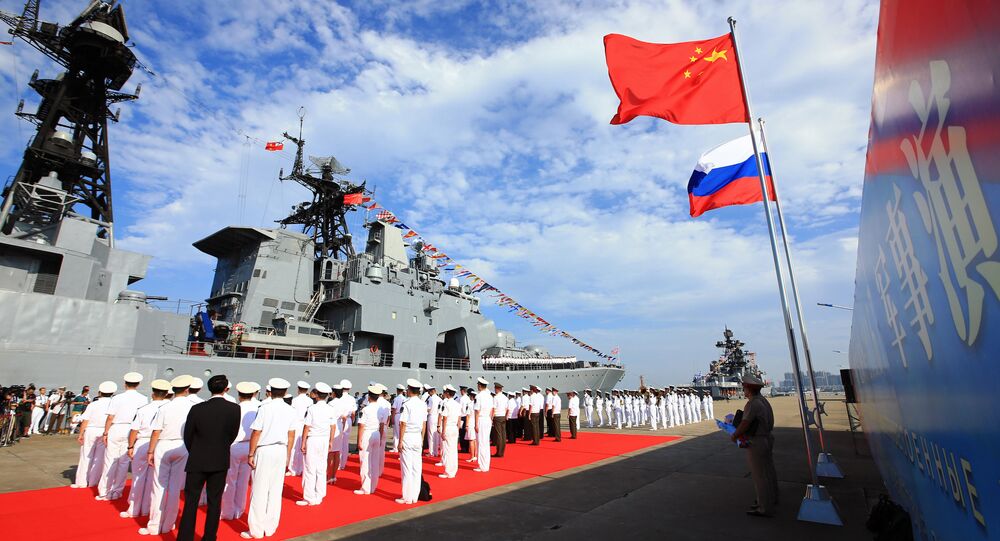 Russia and China have kicked off the Joint Sea-2016 naval exercise aimed at preserving stability in the Asia Pacific and providing safety of navigation in the South China Sea. According to military expert, Teng Jianqun, this shows high level of trust.

© Sputnik / Vitaliy Ankov
What's Behind Russia-China Drills in South China Sea
The eight-day drills will be held in the South China Sea off southern China’s Guangdong province. Surface ships, submarines, fixed-wing aircraft, ship-borne helicopters and marines are expected to take part in the exercise scheduled to last until September 19.

“They are not afraid to share intelligence and technical capabilities with each other and it is a good basis for strong military relations between Moscow and Beijing,” CC TV reported military expert Teng Jianqun as saying.

“The enemy submarines operation and amphibious island landing operation are two of the most sophisticated items for any maritime drills. It shows solid level of trust between the two countries,” the expert pointed out.

Both the countries will participate in defense, search and rescue, as well as escort operations.

He further spoke about how during a military drills intelligence and information capabilities are shared. Neither country would give this sort of information if there was no basic level of trust.

Talking about Russian-China military drills, Jianqun said, “If you look at the evolution of the development of maritime drills, the first one was initiated in 2012. At that time, the two sides were very cautious of each other because that was the first contact in maritime engagement.”

“After at least four runs of the drill, the two sides have become very familiar with each other and they are very good at communication,” the expert said.

Jianqun further said that this is “good relations between the militaries and it shows good political trust which is laying the foundation for good relations overall between Russia and China.”

He further said that the two countries share a common interest in this region and they also share the same responsibilities, hence they are willing to cooperate.