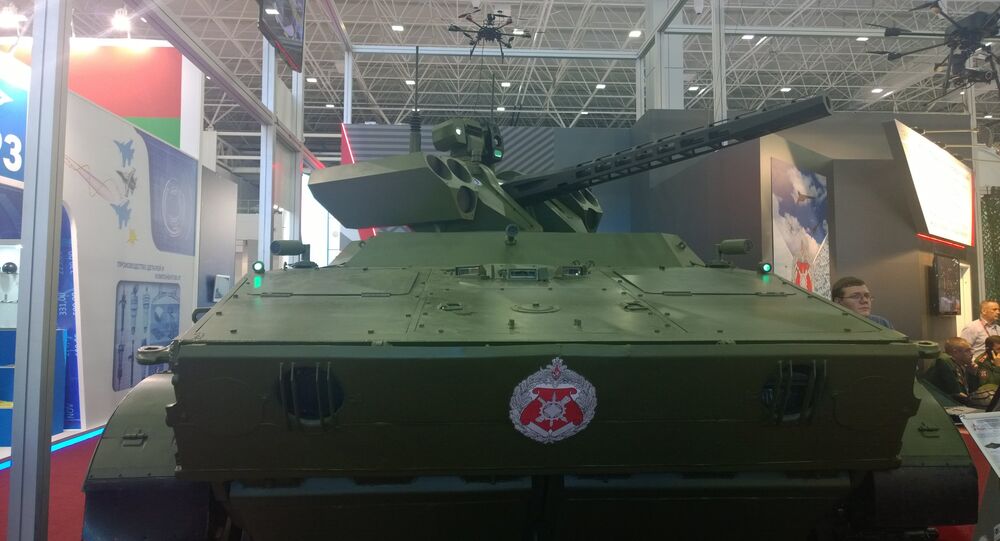 As self-sufficient combat systems gradually become more common and transition from the realm of sci-fi movies, Russia has unveiled the Vikhr robotic system which to a certain extent looks like the T1-8 from the film Terminator 3: Rise of the Machines.

© Photo : Youtube/ TV Zvezda
Warriors of Steel: Meet Russia's Robot Army (VIDEOS, PHOTOS)
There is, however, a tangible difference: the Russian Vikhr already exists, unlike its fictional analogue, and was exhibited during the Army-2016 forum near Moscow. It was terrifying to see the robot’s turret moving and aiming automatically – no tech-noir movie can hold a candle to it.

“This is a robotic system. It means, it can be either controlled by an operator or accomplish certain tasks autonomously. For example, it can reach a set destination without any human control and avoid obstacles on its own,” Dmitry Bogdanov, deputy CEO at the Sevastopol-based Impulse-2 Scientific and Technical Center, told Sputnik.

© Sputnik / Vasiliy Raksha
Russia Showcases Cutting-Edge High-Mobile Self-Propelled Howitzer Phlox (VIDEO)
The robot is based on the BMP-3 infantry fighting vehicle’s track, has an action radius of 600 kilometers and can move at a speed of 60kmph on land and 10kmph in water.

The vehicle can automatically detect targets and prepare to attack them.

“Depending on the target, the Vikhr robotic system chooses an appropriate weapon and offers it to the operator. For example, if the robot locks on a helicopter, it may select a surface-to-air missile. But the operator can select another option, and it is the operator who makes the final decision,” Bogdanov explained to Sputnik.

The Vikhr complex also includes four quadrocopters, a mobile robotic platform for special tasks and a control system. A crew of two, a commander and an operator, operate the whole complex.

“The fire control system has an electro-optic aiming set including a high-resolution camera, an infrared sensor, and a laser ranger which determines the distance to a target. It is also equipped with a weather station which automatically registers and takes into account such parameters as wind speed, humidity, temperature, pressure,” the specialist elaborated.

On Saturday, RIA Novosti reported that the Russian Defense Ministry expressed interest in the robot.