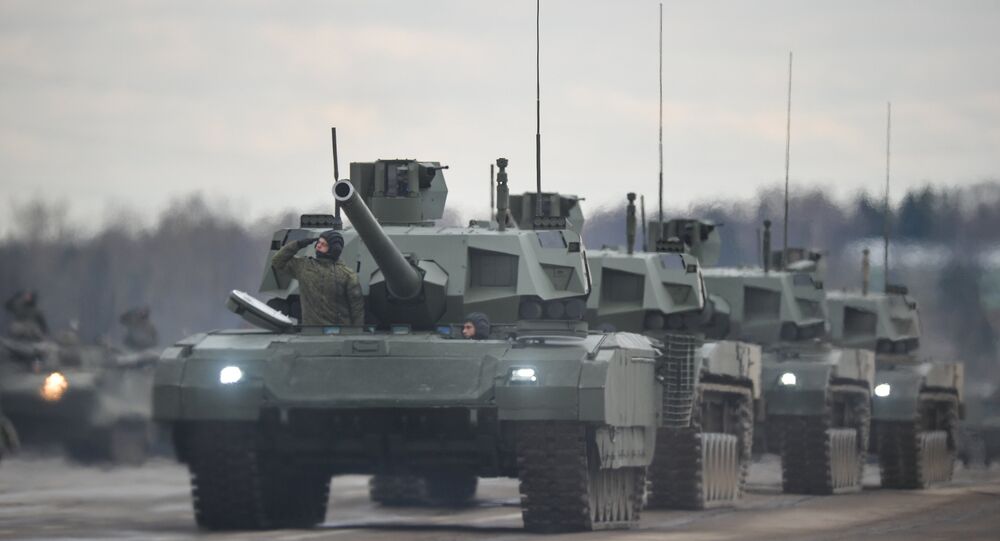 The high technical level of the latest Russian T-14 Armata tanks has forced Western manufacturers to urgently upgrade their own Leopard and Abrams military vehicles, according to the head of the main vehicles and armor department of the Russian Ministry of Defense, Lieutenant-General Alexander Shevchenko.

© AFP 2021 / YURI KADOBNOV
Unmanned Robotic Armata Tank to Be Developed in 2018 - Russian Defense Ministry
“For us the most important thing is: merging firepower, handling and protection. For the West, the approach may be slightly different, but do note that as soon as Armata was created and displayed, the modernization of German Leopard and American Abrams  started. The creation of joint ventures to develop new models of armored vehicles also began,” Shevchenko said.

According to the general, it may mean that Russia has managed to get it right by manufacturing such a futuristic tank.

Furthermore, “Armata tanks may work with any ammunition of 125 mm caliber and that is the highlight of this tank. If more modern ammunition of this caliber is manufactured, the tank will be able to use it,” Shevchenko said.

The Russian Defense Ministry will put into service three combat vehicles built on the basis of the country’s advanced Armata platform, including tanks, infantry fighting and repair vehicles

Shevchenko said that, “The unique character of this work is that more than one sample in the immediate family developed on a single platform is brought into service. If there are positive results from tests in 2017, then the three models will be accepted immediately.”

The Armata is a Russian prototype of a heavy tracked vehicle platform that will be used as a basis for the construction of a next-generation main battle tank and a range of other combat vehicles.