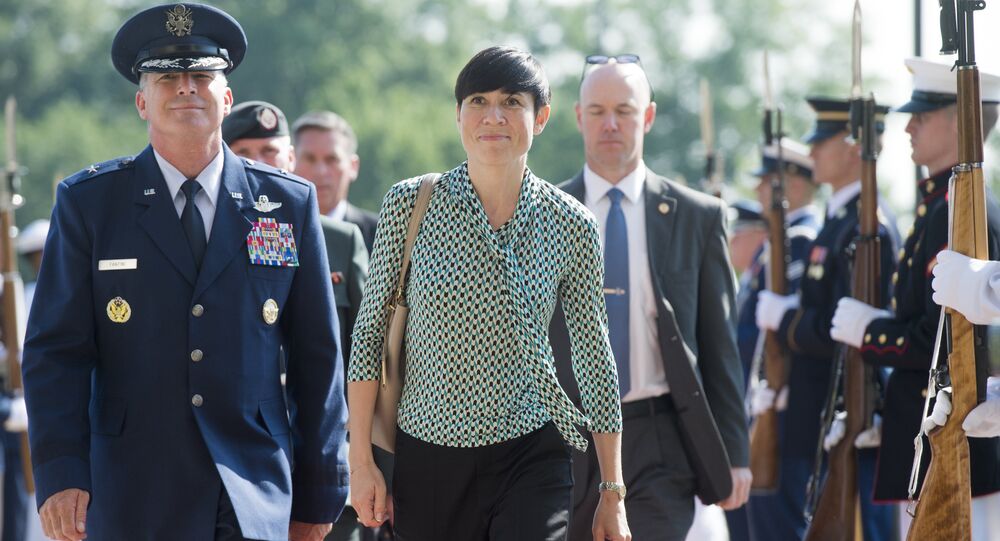 Norwegian Defense Minister Ine Eriksen Søreide has landed in hot water for supposedly playing down the purchase cost of pricey US-made F-35 fighter jets. Meanwhile, unforeseen and skyrocketing expenses are feared to leave even larger dents in the country's defense, which has become increasingly dependent on NATO.

© AFP 2020 / YIANNIS KOURTOLGOU
Oslo's New Defense Plan Leaves Norwegian Coast Defenseless
Previously, the Norwegian parliament gave the green light to spending no less than 81.6 billion NOK (roughly $9.9 billion) on the fighter jets. This sum was determined with a security grade of P85, meaning that there was an 85 percent chance that the final price would fall within the estimated bracket. When questioned by parliament, Søreide indicated the price as 80.2 billion NOK (roughly $9.7 billion), yet provided a security grade of P50, thus tacitly acknowledging the risk of a possible price hike, Norwegian newspaper Dagbladet reported.

According to Olav Torp, professor of the Norwegian University of Science and Technology (NTNU), there is a huge difference between the two figures, which possibly implies extra defense expenditure.

The Norwegian defense was therefore left with a 50 percent probability that the overall price tag for the much-debated fighter jets will exceed the frame, set by parliament. During the dispute over the expensive fighter jets, Liberal deputy Ola Elvestuen asked the Defense Minister to "calm down" on her shopping trips to the United States. So far, 22 aircraft have already been ordered. According to him, the purchase of the next 18 jets must be postponed until the Defense Ministry sets things straight.

"First we have to get costs under control. Søreide's comparison of P50 and P85 is no trifling matter, as the two figures are not comparable. When P50 seems almost on par with P85, in reality it means a significant cost increase," Elvestuen told Dagbladet, citing risks of the situation spinning out of control amid a strong dollar.

© Flickr / Airman Magazine
Flying a Kite: Epic F-35 Deal Leaves Denmark Vulnerable and Penniless
In 2008, Norway chose the F-35 as a successor to replace its outdated fleet of F-16s. In total, Oslo expects to buy 52 F-35 aircraft, of which the first was commissioned in 2012. The first Norwegian F-35s will be stationed in the US, where Norwegian crews will be trained. The first aircraft delivery to Norway is expected to happen in 2017.

In June, the Norwegian government presented its long-term plan for the military update. The biggest priorities were stated as combat aircraft and submarines, at the expense of the army and the national guard, which triggered many angry reactions among high-ranking military officials and security experts for weakening Norway's overall defense potential.

Earlier, Norwegian newspaper Klassekampen revealed that Søreide had lost an internal party struggle and was forced to make do with 41 billion NOK (roughly $5 billion) less than she had asked for the fighter jet purchase. Curiously, Søreide defended her choice with fears of an increased dependence on NATO.

"When things get more expensive than expected, you end up in a jam, and cuts will occur where possible. After all, it's our army power," Elvestuen said, stressing the need for new artillery and upgraded combat vehicles, as well as preserving both the coastal guard and the national guard.

© AFP 2020 / FABRICE COFFRINI
New Saab Fighter Jet Gives Swedish Defense Unexpected Headache
This is not the first time Ine Eriksen Søreide hasfound herself in trouble. When Norway's Defense Minister proudly presented her defense plan for the next 20 years, it was lauded as a "historic commitment to defense." However, a later survey the by Norwegian newspaper Dagbladet revealed that Søreide's plan in fact entailed less money for defense in comparison with the previous long-term plan the Stoltenberg government had adopted in 2012.

The overall price tag for Søreide's defense plan for 2015-2035 is 12 billion NOK (roughly 1.5 billion) cheaper than Stoltenberg's. Additionally, there is a marked difference in priorities, as Søreide's clearly prioritizes navy and air force above the rest of the military branches.