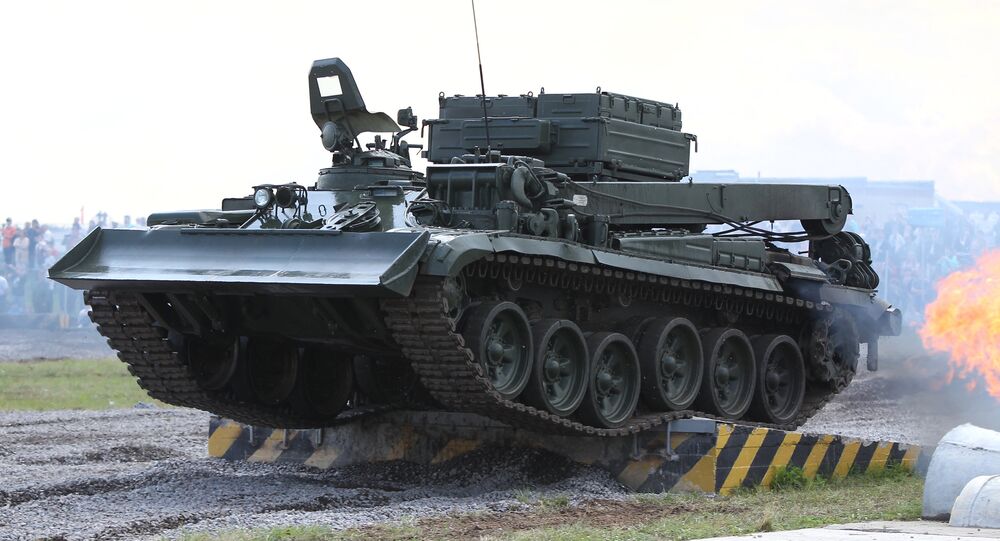 The new ARV has been developed on the platform of the Kurganets-25 infantry vehicle, and is intended to support infantry vehicles or armored personnel carriers. It carries repair equipment such as replacement engines, transmission systems, clutches and other necessary components, and is able to withstand heavy gunfire.

"The vehicle is currently undergoing testing at the moment, and it can be expected to be deployed together with the Kurganets-25," Sergey Abdulov, head designer at SKBM, told Izvestiya.

Abdulov explained that the new vehicle is safer than its predecessors, and boasts an improved system of evacuation for soldiers under fire.

"The vehicle improves on its predecessors such as the Beglyanka ARV thanks to the greater capacity of its main crane and the strength of its winch," Abdulov explained.

"For protection, it has the same 12.7mm caliber gun as the Bumerang armored personnel carrier, and the same level of armor as the (Kurganets-25) infantry vehicle."

© Photo : The Russian Defence Ministry
Armata, Kurganets & Co: Sneak Peak at Russia's Brand New Military Equipment
Instead of having to leave the armored cabin of the ARV to connect tow ropes to an incapacitated military vehicle, risking enemy fire, the new ARV allows soldiers to remotely connect the towing rope with special loops on the combat vehicle.

The new ARV improves upon the BREM-1 armored recovery vehicle (pictured above), which entered service in 1984.

A military source told the newspaper that the ARV will be deployed to support infantry and marine battalions equipped with the new Kurganets-25 and Bumerang combat vehicles, as well as the older BTR-80, BTR-82B, BMP-2 and BMP-3.

© Wikipedia / Vitaly V. Kuzmin
Bumerang armed personnel carrier
"The armored recovery vehicles which are currently in service with the Russian army are unfortunately unable to handle the task of repairing the Kurganets and Bumerang," the source explained.

The Kurganets-25 tracked infantry fighting vehicle and the Bumerang amphibious wheeled armored personnel carrier were unveiled at the May 9 2015 Victory Day military parade in Moscow, and are currently undergoing testing ahead of the first deployment in 2017.

© Sputnik / Host Photo Agency
A Kurganets armored personnel carrier with medium-category caterpillar chassis at the final rehearsal of the military parade in Moscow to mark the 70th anniversary of the WWII Victory
The Kurganets-25 is intended as a modular platform for several different infantry fighting vehicles and tracked armored personnel carriers. It is fitted with a 30mm automatic cannon, a 7.62-mm machine gun and two twin Kornet anti-tank guided missile launchers.

Up to eight dismounted soldiers can be transported in the vehicle, which has a maximum speed of 80km/h on land, and 10km/h in water.