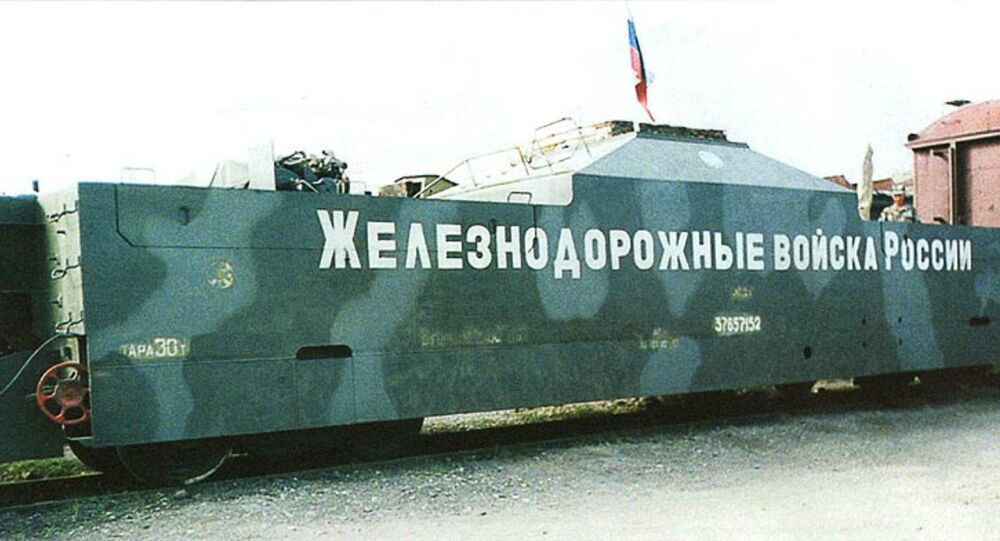 On Monday, the Russian army kicked off military exercises in the Volgograd region, using its 'Baikal' and 'Amur' armored trains for the first time in nearly fifteen years.

Speaking to the Russian media last week, a source from the headquarters of the Southern Military District explained that the trains and the troops onboard would be practicing logistical support, their tasks including the defense of bridges and sections of rail against enemy reconnaissance and sabotage groups, as well as the restoration of damaged infrastructure and sections of track.

© Photo : Ministry of defence of the Russian Federation
Russian Bombers Annihilate Jihadi Bases, Weapons Depots, Tanks in Syria (VIDEO)
The source noted that Russia presently has two armored trains, one based in Nevinnomyssk, Stavropol Krai, and the other in Volgograd, formerly Stalingrad, the famous site of one of the Second World War's deadliest battles. In wartime, Russian army doctrine calls for the trains to be used to defend important railroad assets.

Each train is equipped with two ZU-23-2 23 mm anti-aircraft twin-barreled autocannon, and carries a standard-armed rifle platoon equipped with machine guns and grenade launchers. Other equipment can be added as necessary.

The 'Baikal' and 'Amur' are not to be confused with the Barguzin nuke train, a rail-based strategic missile complex meant to transport and launch strategic nuclear weapons. Those secretive trains, equipped with six RS-24 Yars ICBMs apiece, are under development, and expected to enter into service sometime in the next few years.

The Baikal and Amur are from a different school of military thought. The armored trains were used in the conflicts in Chechnya, where four such trains were operated as troop trains, simultaneously providing cover for sappers engaged in track demining operations, and to protect important infrastructure.

Armored trains have a long and proud history in Russia, and have been used since the days of the First World War and the Russian Civil War, as well as the Second World War, when they essentially served as mobile fortresses.

Commenting on the roles this unusual and seldom spoken-of piece of military equipment can be assigned to in modern warfare, PolitRussia contributor Boris Stepnov emphasized that it's necessary to understand, first and foremost, that "no one is going to send an armored train up against modern tanks; their role is that of mobile fire support, logistics, sapper work, etc."

"In this kind of work, armored trains are highly functional, especially when it comes to low intensity conflicts, i.e. counter-terrorism operations…The presence of terrorists in an area makes it impossible to ensure the security of the rail transport network through its entire length; therefore, a mobile fortification equipped with heavy weapons solves this task very well."

© Sputnik / Grigoriy Sisoev
Russia’s $300 Bln Plan to Modernize Army by 2020 Still on Target
Stepnov recalled that in circumstances where areas may be controlled by terrorists or other militants, armored trains are an excellent alternative to aircraft and road transport for moving of resources and personnel. "The mass use of air transport quickly becomes very expensive, and is vulnerable to ground fire from areas controlled by the enemy; using civil transport and passenger aviation is too risky. At the same time, road transport, even when accompanied by armor, means the use of ordinary Kamaz and Ural trucks, which are not armored," making them vulnerable even to small arms fire, "while roads can be blocked by rubble and other obstructions."

In this sense, the journalist suggested, "rail transport, when accompanied by protection in the form of armored trains, allows for regular and effective patrolling of areas which, unlike roads, remain a restricted zone even in peacetime." After all, "not just anyone can use the rail system…Putting armor on the train, meanwhile, is much easier to do than in the case of road transport, while its great weight capacity allows it to carry significant armament."

According to publically available information, the Russian armored trains are equipped to withstand everything from small arms fire to artillery fire using 30mm shells. Their basic weapons include automatic grenade launchers and heavy machine guns, but if necessary, they can also be equipped with installations including modular multiple launch rocket systems.

Stepnov recalled that the question of the train's armament was decided in a simple but effective way a long time ago; "the center of the train can be fitted with a tank resting on a platform; the tank is capable of fire from all angles from its main gun." Naturally, "apart from the tank, the platform can be equipped with any armored vehicle, equipped with a wide range of weapons, which can be changed out depending on the objectives in the given situation."

All in all, while armored trains may have seen their first use nearly 150 years ago, the Russian military command apparently believes that they are far from having outlived their usefulness, especially when fitted with modern equipment.