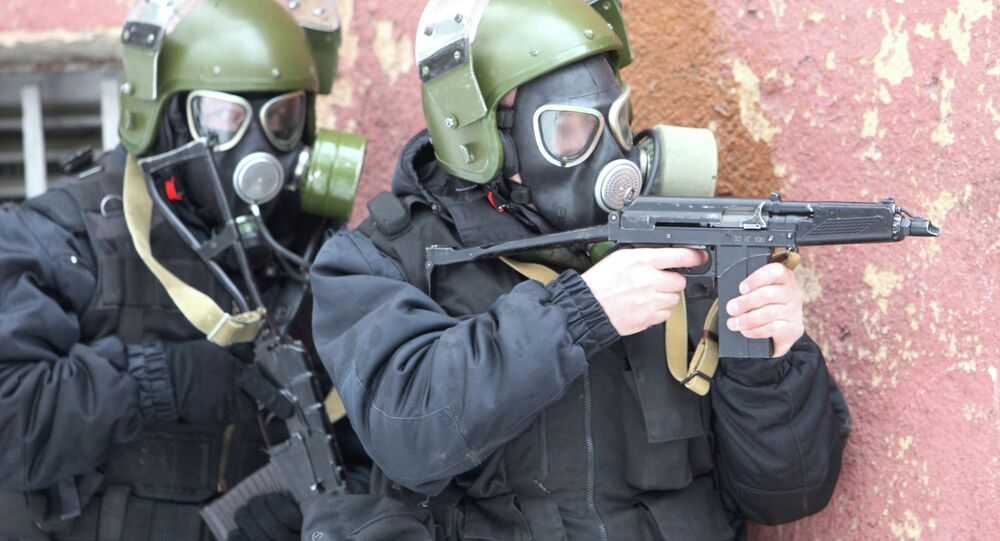 "The Federal Security Service of the Russian Federation prevented terrorist acts in the Republic of Crimea, prepared by the Ukrainian Ministry of Defense's Main Intelligence Directorate," the FSB said in a statement.

According to the security service, the attacks were set to target the peninsula's key infrastructure and facilities.

"The goal of the sabotage and terrorist acts was to destabilize the sociopolitical situation before and during the election of federal and regional authorities," the FSB said.

One FSB officer was killed during the counterterrorist operation.

“As a result of search operations on the night from August 6 to August 7, 2016, a group of saboteurs was discovered near the town of Armyansk in the Crimean Republic. An FSB officer died as a result of a firefight during the arrest,” the FSB said.

Twenty improvised explosive devices, ammunition and other weapons at the disposal of the Ukrainian Armed Forces have been uncovered at the site, the service added.

The FSB said that it had eliminated a spy ring organized by the Ukrainian Defense Ministry in Crimea, detaining both Russian and Ukrainian nationals involved in preparing terrorist attacks on the peninsula.

"An agent network [created] by the Ukrainian Ministry of Defense's Main Intelligence Directorate has been eliminated. Ukrainian and Russian nationals involved in the preparation of terrorist acts have been detained and are confessing," the FSB said in a statement.

Russia’s border with Ukraine has been reinforced and security at places of mass gathering and key infrastructure facilities in Crimea has been stepped up.

“Additional security measures in public and recreational places have been adopted, including the protection of critical infrastructure. The boundary regime on the border with Ukraine has been strengthened,” the FSB said.

A criminal investigation has been opened into an attempted act of terrorism filed late last week and claimed to be directed by the Ukrainian Defense Ministry's intelligence service, it added.

The Federal Security Service also said it had prevented two overnight attempts by Kiev-organized terrorist groups from entering Crimea on the night of Monday, August 8, in which one Russian soldier was killed.

"The break-through attempts were covered with massive shelling from the neighboring state and the Ukrainian Armed Forces' armored vehicles. A Russian Defense Ministry serviceman was killed in the firefight," the FSB said.

Ukraine Filmmaker Sentenced to 20 Years for Plotting Terrorism in Crimea