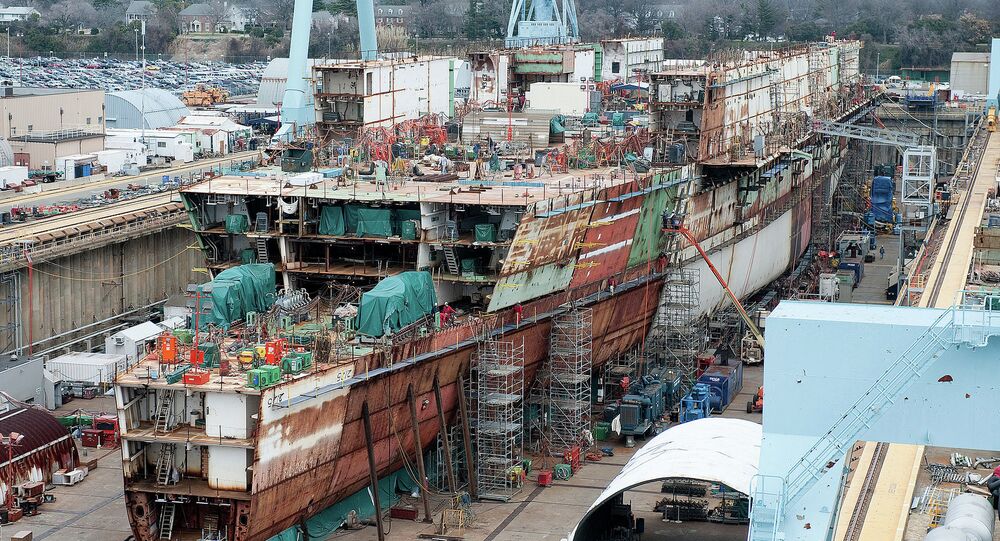 US' Newest, Most Expensive Aircraft Carrier May Soon Become Obsolete

The US Navy's newest $13 billion aircraft carrier the USS Gerald R. Ford is still not ready for combat, although it was supposed to join the fleet back in 2014, the Washington Free Beacon reported on July 25.

"The USS Gerald R. Ford is the first new aircraft carrier designed in 40 years, and incorporates new technology that will enhance the Navy's combat readiness. It is the first of three Ford-class carriers the Navy has ordered, which are expected to cost about $42 billion altogether," the media outlet underscored adding that the warship "is the most expensive aircraft carrier in US history."

© AP Photo / Steve Helber
Pentagon: Most Expensive US Aircraft Carrier USS Gerald Ford Won’t Succeed in Combat
However, the problem is that the aircraft carrier appears to have become obsolete even before going into service.

In his recent article Dave Majumdar, the Defense Editor of The National Interest, poses the question whether American taxpayers should really waste $13 billion on the Ford-class carrier which is unable to carry out a lethal strike mission "inside an anti-access/area denial bubbles" on "day one."

"If the United States Navy is either unwilling or unable to conceptualize a carrier air wing that can fight on the first day of a high-end conflict, then the question becomes: Why should the American taxpayer shell out $13 billion for a Ford-class carrier?" Majumdar asks.

The journalist quotes Jerry Hendrix, director of the Defense Strategies and Assessments Program at the Center for a New American Security, who remarked in an interview with The National Interest:

© REUTERS / US Marine Corps/Lance Cpl. Remington Hall/Handout
Troubled Waters: F-35 to Undergo Tests Aboard New Amphibious Ship
"There are people making that statement: 'it's not our job on day one'-they can say there are all these other missions-presence and show-the-flag-but if that's where they fit, their price ought to be scaled to that."

To tackle the problem the US Navy should develop a "new, long-range, unmanned strike aircraft" that can counter those threats, Hendrix told Majumdar.

For his part, Bryan McGrath, managing director of the naval consultancy FerryBridge Group, agreed that what really matters is the carrier's air wing. The carrier itself is nothing more than a "floating airport," the expert stressed.

Citing Washington's naval analysts, Majumdar calls attention to the fact that the US current short-range Boeing F/A-18 Hornet-based air wing is likely to become inefficient in the 2030s even if boosted by longer ranged Lockheed Martin F-35C Joint Strike Fighters.

© REUTERS / Yuya Shino
Gunboat Diplomacy: How Washington Uses Aircraft Carriers and How They Can Be Challenged
The US Navy should be more flexible to address modern-day threats. Instead of sticking at costly projects it should rather consider less expensive and more effective alternatives, the expert notes.

However, instead of developing new stealthy unmanned strike fighter jets or new air-launched cruise missiles to realize the concept of a "mobile, semi-stealthy, long-range strike," the US Navy continues to follow the beaten path.

The USS Gerald R. Ford is not the first project that threatens to become a waste of time and money: the US controversial F-35 Joint Strike Fighter has repeatedly come under heavy criticism from US military experts and Washington's NATO allies.

Meanwhile, the US Air Force announced Tuesday that the first squadron of F-35As ready for combat, almost 15 years after the project was kicked off. The project's total cost amounts to $379 billion, nearly 70 percent more than it has been initially estimated.

Still, according to Defense News, not everything is rosy in the garden of the F-35 designers:

"During a recent interim readiness assessment, operational testers found the F-35A's scope did not always display data in an intuitive manner, necessitating that the pilot hone in on a data point to get more information," the media outlet noted.

The question whether the project is really worth the trouble remains open.