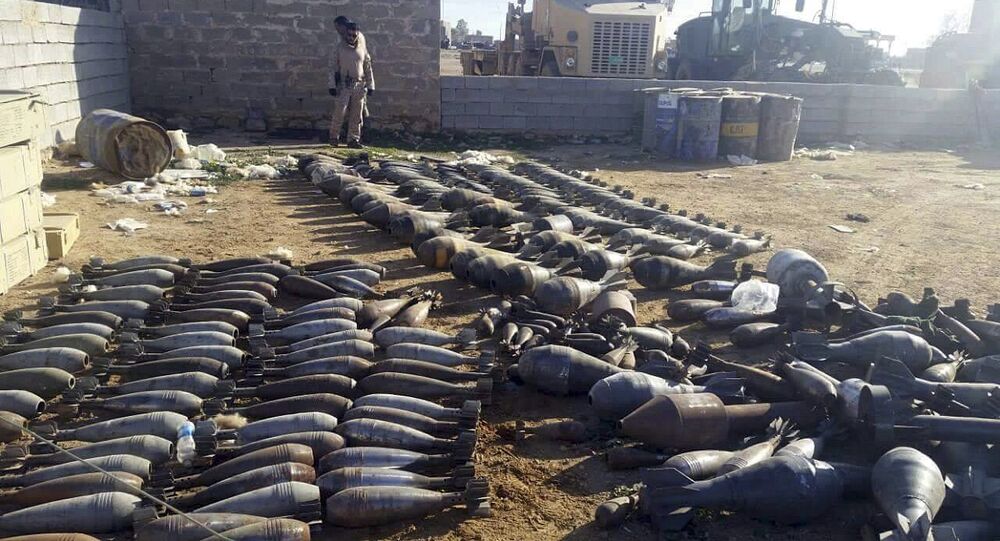 US 'Definitely Involved' in Funneling $1.3 Bln in East European Arms to Mideast

A detailed investigation has found that at least $1.3 billion-worth of Eastern European weapons and ammunition has been sold to Middle Eastern countries involved in the arming of jihadist rebels in Syria. Speaking to Radio Sputnik, Patrick Wilcken, a researcher in arms control at Amnesty, said he had no doubt whatsoever that the US is involved.

On Wednesday, the Balkan Investigative Reporting Network and the Organized Crime and Corruption Reporting Project published the results of a major inquiry into the flow of weapons from Eastern European countries to the Middle East, finding that since 2012, at least $1.3 billion-worth of weaponry and ammunition has been sold to countries including Saudi Arabia, Jordan, the United Arab Emirates, and Turkey, which then handed them over to militants in Syria and anti-Houthi forces in Yemen.

Speaking to Radio Sputnik, Patrick Wilcken, an Amnesty International researcher who participated in a review of the evidence collected for the report, explained that what these countries were doing was clearly illegal.

Wilcken noted that "what appears to be going on is that Eastern European countries that had large Cold War arms industries have been retooling these industries for the new conflicts in the Middle East." What's most alarming, he added, is the fact that "there was very limited trade into the Gulf from Eastern European countries before 2012, but thereafter that spiked."

At the same time, the researcher emphasized that it was obvious that these Middle Eastern countries weren't using the weapons to equip their own countries' armies. Eastern European countries have provided regional countries including Saudi Arabia, Qatar, the UAE and Turkey with former Warsaw Pact standard weapons, despite the fact that all these countries use NATO standard weaponry. In other words, "there's a very high risk there of diversion into the conflict zone."

"We see across Iraq and Syria that it's mainly Warsaw Pact standard equipment that's being used by [Daesh] and other armed groups. So it's very alarming that these countries are recklessly exporting into the Gulf, and there appears to be at least circumstantial evidence that those weapons are ending up in the hands of very violent armed groups," the analyst noted.

© Sputnik / Khaled Al-Khateb
Syrian Army Defuses Car Bombs Preventing Terror Attack in Hama (VIDEO)
The weapons deliveries are being made despite the fact that some of these groups, including Daesh and al-Qaeda affiliated Nusra Front, are under a UN arms embargo.

Furthermore, in addition to the sale of mothballed weapons stocks left over from the Cold War, Wilcken emphasized that the report has also shown that there are new stocks, "manufactured as recently as 2015."

Asked to comment on the arms trade from the standpoint of international law, the researcher noted that the evidence points to these arms sales being illegal. He pointed out that the "common thread" between the EU and international level legislation formally governing Eastern European countries' behavior "is that arms cannot be transferred if there is substantial risk that they will end up being used to systematically violate human rights. In this instance, I think that the risks are very, very high. We have seen that there is a huge surplus of arms being used by these armed opposition groups, by Islamist extremist groups in the region."

Wilcken also emphasized that one of the more concerning aspects to this case was the fact that the trade is so out in the open. "There is a very small covert trade around the world, which is often very concerning, but [then] you have this massive overt trade by the big traders, often into situations where there is a very high risk that the weapons will be used to destabilize regions and systematically violate human rights."

© AFP 2020 / Sameer Al-Doumy
The Myth of the 'Moderate' Rebels in Syria
"This is where I think the [UN] Arms Trade Treaty is very important: we do have a legally binding treaty which says very clearly that those trades, even if they are authorized, open trades, are illegal if they carry that risk."

Asked whether he suspects US involvement in this operation, Wilcken said that "clearly the US has a huge open trade with Saudi Arabia, the Emirates, Qatar, and Turkey. It has also had a covert trade, much of it funneled through Eastern Europe, to armed opposition groups in Syria. The US is [the world's] largest arms producer and exporter and has a massive role in this."

At the same time, the researcher added, "virtually all producers and suppliers of weapons are involved here." For instance, "Iran and Russia have consistently supplied the Assad regime. Over thirty states have supplied Iraq…So while the US and the EU are major players, and I think there has to be far more stringent accountability and oversight mechanisms, many other states are involved."

For the fairness sake, Wilcken did not mention that while Russia and Iran are involved in the supply of weapons to Syria, those supplies are based on state-to-state contracts which are perfectly legal under international law. The trade that these Eastern European countries appear to be engaged in, on the other hand, is the supply of weapons to Middle Eastern governments that then transfer them to anti-Syrian government militias, including Daesh and the Nusra Front.