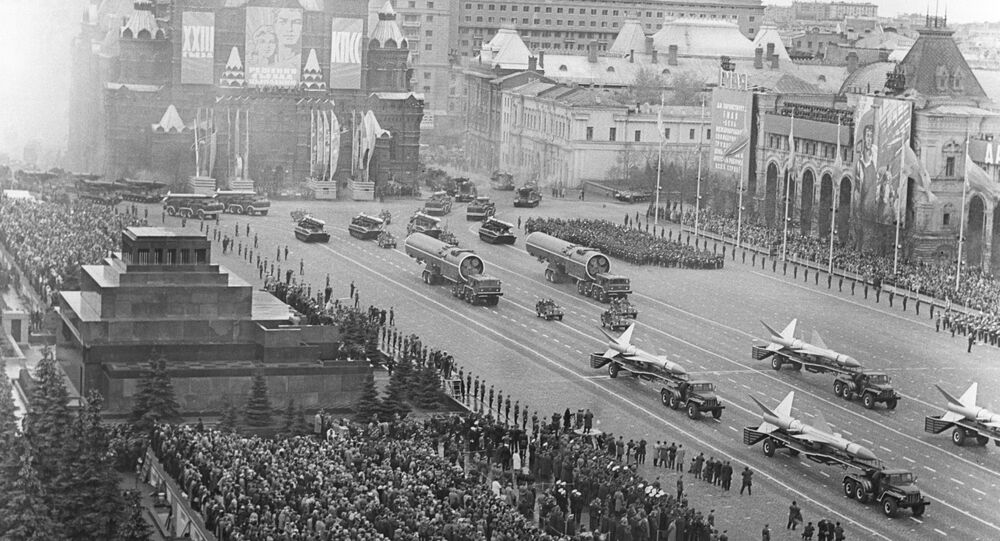 In his article, published by the independent Russian newspaper Svobodnaya Pressa, Karyukov recalled that it was fifty years ago this month that the United States removed its nuclear artillery from service.

YouTube/Sputnik
Blast From the Past: The Legendary Soviet 'Katyusha' Rocket Launcher
"These systems had already been replaced by rockets, being manufactured by the two nuclear superpowers 'like sausages'," the journalist added. "In 1959, in the midst of this competition between socialism and capitalism, Soviet leader Nikita Khrushchev was presented with a truly fantastical plan" which would really allow Moscow to get under Washington's skin.

The world's oceans, Karyukov noted, contain underwater shoals generated by volcanic and coral activity, constituting small islands or land masses hidden as little as a few meters below sea-level. Many of these underwater landmasses are in close proximity to the US in both in the Pacific and the Atlantic oceans.

In 1959, "having analyzed these and other data, the Miroshnikovs, a family of Soviet military engineers, presented Khrushchev with a plan: to build on these land masses over twenty artificial islands, and to place missile bases on top of them, thus surrounding the US in a nuclear ring."

"According to the plan…the cost of raising a hundred-meter wide platform above the sea would not be so great – a million rubles. By comparison, each rocket launch by Korolev [the top Soviet rocket designer] was costing the budget half-a-billion rubles!"

There were several significant challenges to the idea, Karyukov noted. "First, it would be necessary to build the artificial islands all at once. This followed from the assumption that, as soon as the Soviet Union began constructing its first artificial platform, the Americans would immediately stake a claim to the rest. However, the project made provisions for the conversion of these underwater formations into artificial islands in the space of a single day. Therefore, the threat to the plan in this regard would exist only if it could not be carried out all at once."

"Second, it was taken into account that the US could simply bomb such man-made islands back into the ocean. After all, they would have been built right under America's nose, while the Soviet Union would be thousands of miles away. Therefore, it was proposed to strengthen the sites as much as possible, effectively turning them into fortifications."

Essentially, the journalist recalled, "the operation to capture these missile footholds would look something like this: an unclaimed island would appear above the water, above which the USSR would raise its flag, and the island and the entire 12-mile zone of territorial waters around it…would be declared Soviet territory. By the time the Americans came to their senses, missile sites would already be installed. Moreover, having staked a claim to such a large portion of the sea surface (over a thousand square kilometers), the USSR could quietly begin to assimilate neighboring islands or underwater sandbanks."

© Photo : Youtube/Jean-Baptiste Bessières
Top Secret Project 705: Soviet Submarine Still Causing a Stir in the West
"It goes without saying that our valiant missile specialists would work under cover, [disguised as] ordinary Soviet fisherman. And while these newly-opened 'fishing bases' were being declared to the world by the Soviet Foreign Ministry, the islands would begin to be fortified, expanded and added to with new layers. Moreover, during this stage engineers would pump water out of the interior of the base. Thus, it would come out resembling an underwater dry dock."

"And it would be in these giant building that work on the third stage would begin…equipping the island with hidden launchers of intermediate-range missiles…In addition to the rockets, it would also be possible to build airfields, submarine bases, berths for ships, etc."

At the same time, Karyukov recalled, "it hardly needs to be said that the entirety of this daring operation was also planned with pronounced political overtones in mind…At the time, the Soviet Union was surrounded all across its borders by dozens if not hundreds of NATO and US bases, including airfields, missile launchers, radar points and other military facilities. Khrushchev could thus put a hedgehog in Uncle Sam's pants to force the hegemon from across the ocean to tone down its militaristic appetites. This, it's worth recalling, is what actually happened a few years later with Cuba, after John F. Kennedy was forced to dismantle the US missiles in Turkey, which it must be admitted were already obsolete by that time."

Essentially, the journalist noted, "if everything went according to plan, the nearly formed islands would not reveal their real purpose, formally remaining fishing bases. And the money spent would be returned in a very short period. However, keeping in mind the cunning and pretentiousness of American military planners…it's difficult to predict what the hawks would come up with in the event of the operation's success."

© Sputnik / Alexander Mokletsov
I Spy with My Big Eye: How Will Russia's New Missile-Tracking Ship Look?
"After all, even in the case of Cuba, where Washington knew that Moscow stood behind Havana, the US was drawn into a direct confrontation. US reconnaissance planes did not hesitate to violate Cuba's airspace as soon as the Soviet missiles were found there. It is entirely possible that the Americans would just instantly try to level any strange man-made islands that appeared above the water."

Moreover, Karyukov noted, "it's worth reflecting how exactly the engineers planned to conduct the second and third stages of their building operations. If one remembers Operation Anadyr, when the entire US fleet was sent to block our ships and submarines heading to Cuba, the ability to create the [man-made] 'football fields' built in the open ocean seems questionable. First of all, the US would simply not allow our vessels to approach the islands. Secondly, the islands would immediately be surrounded by swarms of US submarines."

"So what happened to the Miroshnikovs' plans? In the official response signed by then Chief of General Staff Marshal Vasily Sokolovsky, it was determined that the engineers had shown that they were removed from the economic, political, military and even technical realities of the time. Therefore, the project presented by A.N. Miroshnikov was deemed 'not worthy of consideration'."

Still, the journalist added, "a few years later, Khrushchev would actually decide to return to the idea of placing missiles under the nose of the 'main enemy'. Everyone knows how that turned out."

Blast From the Past: The Legendary Soviet 'Katyusha' Rocket Launcher