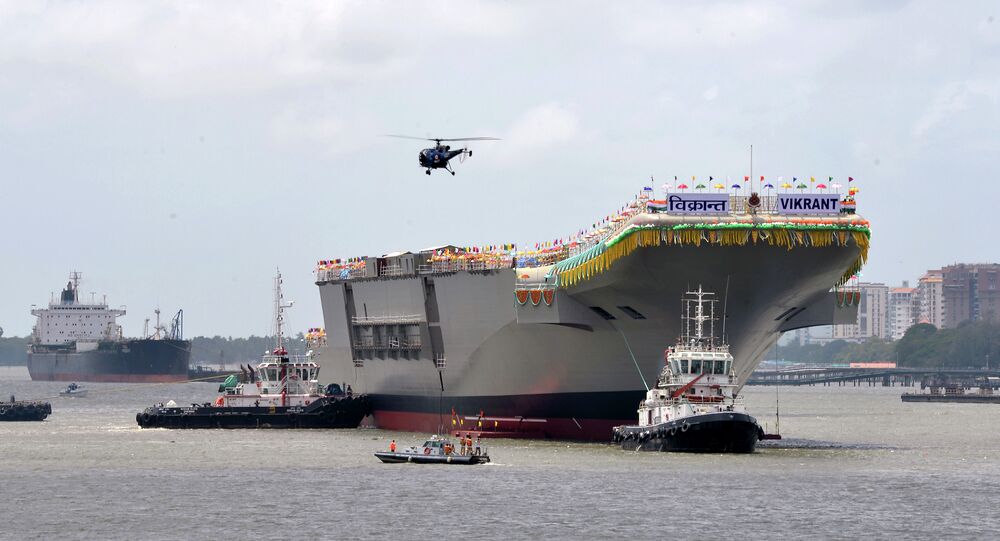 The new dock will not only serve a military purpose, but will also play an important role in fulfilling India's energy requirements.

NEW DELHI (Sputnik) — India is constructing a special dock for high-capacity aircraft carriers at the existing premises of Cochin Shipyard Limited. According to official sources, the new dry dock will cost an estimated $270 million.

© Wikipedia
South China Sea Deployment: Indian Navy's Warships Visit South Korea
Indian Navy Captain Gurpreet S. Khurana, Executive Director of the National Maritime Foundation told Sputnik, "Notwithstanding the Russian offer to India to jointly develop a 100,000 metric ton nuclear aircraft carrier, in my view, India is unlikely to plan for such a large carrier in the foreseeable future. In my considered opinion, we would be building a 60,000-70,000 ton aircraft carrier."

India is planning to produce its domestic aircraft carrier Vishal, which is being designed to be between 60,000 and 70,000 tons. Current shipyards were considered based on their capacity for handling the construction of such a large carrier. Meanwhile, India's first domestically-made aircraft carrier has been under construction at Cochin shipyard since 2009. Currently, India operates two conventional aircraft carriers; INS Vikramaditya & INS Viraat. The INS Viraat will be decommissioned from the Navy soon.

"India needs three carriers because at any given time one carrier is being refit or undergoing repair; at least two carriers should be available to resolve issues during unforeseen emergencies…this dry dock is very important strategically, especially during a warlike situation, when our naval ships may need immediate urgent repair," says Khurana.

sdelanounas.ru
India May Build Up Its Military Power With Russia's Shtorm Aircraft Carrier
India is also targeting the repair of offshore platforms and larger vessels. Captain Khurana stated that this would create lot of economic dividends for India and that the shipbuilding industry would get a boost. Cochin is very close to the international shipping lane which passes south of Sri Lanka. Cochin has tremendous potential for servicing foreign ships, which may also seek to get repaired and refitted at the proposed dock.

Captain Khurana explains another strategic value of the proposed dry dock. "We also may be building some LNG (Liquified Natural Gas) carriers. LNG also has strategic needs. We have no LNG carrier and the energy demand of the country is growing like anything. So it is always good for strategic reasons, in case there will be war tomorrow, to have our own LNG carrier rather than using foreign ships for carrying strategic cargo."

India imports 14.6 million tons of LNG per year. India's demand for LNG is reportedly growing at rate of more than 40% annually. The Indian government is pushing hard to get a maximum amount of cheaper LNG available in the global market.