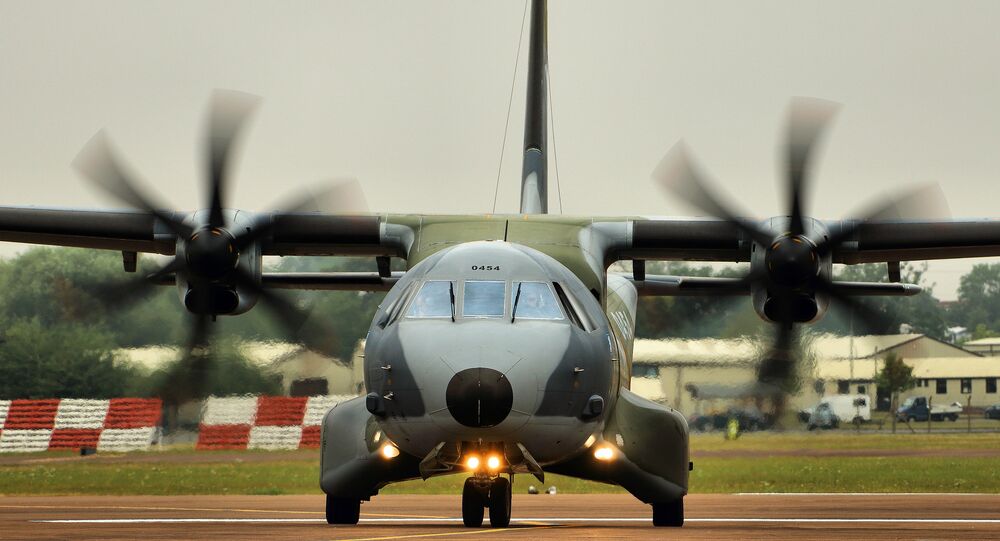 © REUTERS / US Marine Corps/Lance Cpl. Remington Hall/Handout
Troubled Waters: F-35 to Undergo Tests Aboard New Amphibious Ship
For that purpose, the aviation corporation has decided to use the lineup of products from Turkish arms manufacturer Roketsan, renowned for its missiles and rockets. The two sides inked a deal on cooperation on Wednesday during the Farnborough International Airshow, currently held in the United Kingdom.

Under the agreement, Airbus will test the arms producer’s equipment including the 70mm laser-guided Cirit rocket system, the long range air-to-surface anti-tank missile Mizrak-U and the Teber laser-guided bomb with a further goal of mounting them into C-295.

“There is a clear opportunity for us to address the global requirement for a cost-effective, armed utility aircraft, and Roketsan's product range and proven expertise make them the obvious partner,” said Airbus’ head of military aircraft, Fernando Alonso.

The deal marks a new step in an Airbus’ effort to expand the C-295’s range of applications. The twin turboprop has already been modified for four customers to conduct maritime patrol missions, and a number of enhancements are in work.

© Flickr / CAAT
Planes at Farnborough Keep Flying Whilst Arms Dealers in London Keep Buying
At this year’s Farnborough air show, a jet version equipped with a new air-to-air refueling (AAR) kit has been showcased to public. The modification allows the C-295 to be used as a refueling platform for both aircraft and ground vehicles, Airbus said.

Meanwhile, the company is working to make the plane’s cockpit fully automated which would reduce pilot’s job scope dramatically. The eventual goal is to make the most of the jet’s operation automated, including the setting of flaps, landing gear, speed brakes, lights, general systems.

Another direction of development is equipping the jet with early-warning capabilities that would make it feasible for communications intelligence and electronic intelligence missions, Airbus’ head of marketing for tactical airlifters and ISR Fernando Ciria outlined.

© Flickr / CAAT
Planes at Farnborough Keep Flying Whilst Arms Dealers in London Keep Buying
The manufacturer is also planning to make a C-295 version for border control missions. To achieve the objective, a radar with a ground moving target indicator and synthetic aperture functions will be fitted into the plane, Ciria detailed.

Still, according to Ciria, strike capabilities meet heightened demand among customers buying planes. That could explain why the deal with Roketsan fits into the company’s plans. The Turkish company is on the rise now, working on a number of new projects, two thirds of which won’t be revealed until 2018.