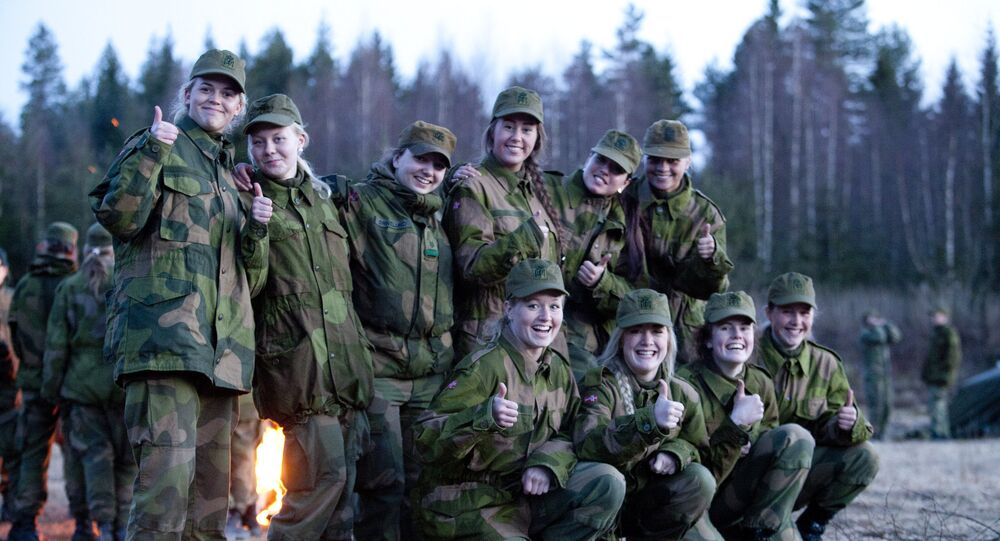 In its never-ending quest for equality between the sexes, Norway recently opened up its armed forces to female recruits. Today, the Nordic country is ready to welcome its first women conscripts.

© Flickr / Defence Images
Despite Decades of Russian Goodwill, Norway Building Up Military Against Moscow
While women only comprised 17 percent of Norway's regular army in 2015, the universal conscription has pushed the share of the fair sex up, as women constituted 33 percent of all the draftees this year. Moreover, Norwegian Defense Engineering College reached a record proportion of 24.5 percent women among this year's applicants.

Prime Minister Erna Solberg paid a warm welcome to the brave female soldiers, saying the was actually glad she had lost the battle for universal conscription to Defense Minister and fellow Conservative Party member Ine Eriksen Søreide back in 2014.

"It's really quite logical, and it emphasizes that the defense is not just about physical challenges and testosterone. Defense is as much about wisdom and good solutions," Solberg told the Norwegian newspaper Verdens Gang. "If we only could get men to give birth, we would definitely be approaching something," she said jokingly.

© Flickr / Let Ideas Compete
Tip of the Iceberg: Segregated Swimming Hours All the Rage in Sweden
Defense Minister Ine Eriksen Søreide has been an active campaigner for universal military service. Now she believes the increased number of women in the military is an occasion for celebration.

"Actually, it's sheer madness that we have excluded half the population from important tasks in defense for so long. It will be very exciting to see when the first female conscripts get to proper action," Søreide said.

Last year, a US study concluded that female soldiers are wounded twice as often in conflict and are less accurate at firing than male soldiers. Women were also reported to have greater difficulty in evacuating the wounded. Military units consisting exclusively of male soldiers score higher in 69 percent of the tasks, compared to units with both male and female soldiers. The survey was conducted among 500 marine infantrymen stationed at Camp Lejeune in North Carolina, 100 of them female.

Congratulating colonel Ingrid Gjerde with the promotion to BG and the assignment @NorwayNATO https://t.co/yldTtSKVzX pic.twitter.com/4BBwdy1Qxh

"I don't know of Norwegian research based on conflict situations, but we know from exercises that women do as well as men in precision and overall effort," Jahren told the tabloid newspaper Verdens Gang.

© AP Photo / Matt Dunham
Norway Follows in US Footsteps, Ready to Deploy Aid to Syrian Rebels
Colonel Sven Halvorsen stressed that the Norwegian defense made no allowances for any sex and had largely common standard and requirements for all conscripts.

Jan Erik Thoresen, Chief of the Armed Forces personnel and military center, spoke of good experiences with women in the Armed Forces. He is ready, however, to see clear differences between men and women.

"In general, we boys have more faith in ourselves, while girls are more cautious. When we come into the service, however, this difference is blurred out," Thoresen said.

© Flickr / Defence Images
Ten-Hut! Norway All Set to Become US Watchdog in the North
Thoresen also expressed the idea that Sweden and Denmark might follow in Norway's footsteps by introducing universal conscription as well.

"It seems that we have been pioneers in this area. At present, it looks like Sweden is about to follow, although it is difficult to say for certain," Thoresen said.

Norway became the first NATO member and first European country to make national service compulsory for both sexes. Both Sweden and Denmark maintain a draft army, with military service being obligatory for men only, whereas women have the option of joining.

The CG meets with the Network of Female Officers and NCOs they have shaped our past paving the way for our future pic.twitter.com/0JI2SVY5kY