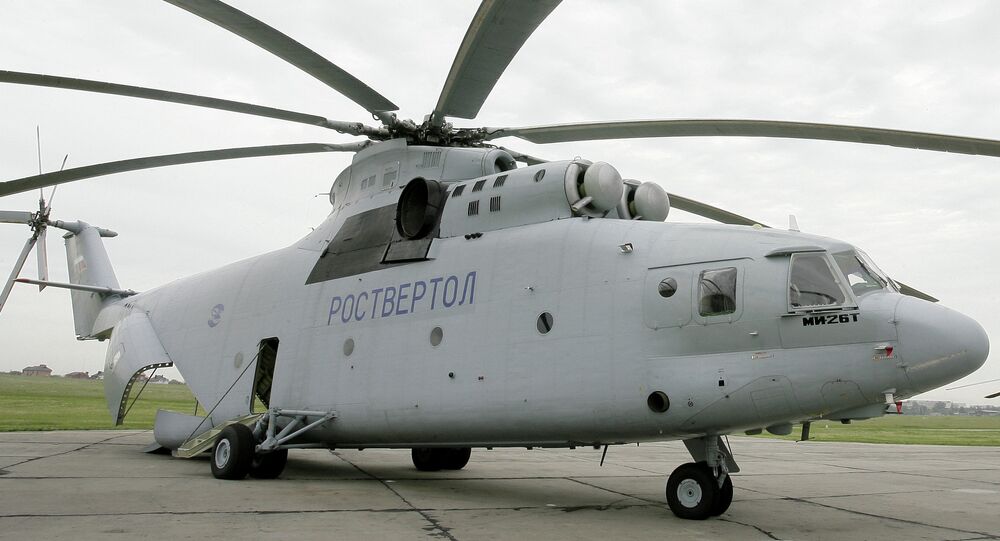 The Russian Helicopters company on Thursday announced that it had supplied the fourth Mi-26TS heavy transport helicopter to China.

MOSCOW (Sputnik) — The Mi-26TS is an export version of the Mil Mi-26T helicopter. Russian Helicopters signed the supply contract with China's Lectern Aviation Supplies Co Ltd in 2014. China has been operating three such helicopters to date.

"The Russian Helicopters holding has supplied an Mi-26TS heavy lift cargo helicopter to the People's Republic of China. The helicopter was built at the Rostvertol plant. The helicopter took off from the plant's flight test station on June 23… Its arrival to China is expected on July 2," the manufacturer said in a statement.

© Sputnik / Grigoriy Sisoev
Russian Helicopters Begins Mass Production of New Heavy Transport Mi-26T2
The Mi-26TSs currently being operated by China are being used by the State Forestry Administration to put out forest fires, according to the statement. It was noted in the press release that the new helicopter is due to enter service in July.

"The supplied helicopter was procured for the needs of the Shandong province where there is active ongoing work to preserve and extend forest cover being carried out. The helicopter will be used to tackle blazes and transport equipment and bulky cargo," deputy CEO of the Russian Helicopters Alexander Shcherbinin was quoted as saying in the statement.

The Mi-26TS was developed by the Mil Moscow Helicopter Plant and is produced by the Rostvertol plant located in Rostov-on-Don. The aircraft has a total payload of 20 metric tons and is equipped with modern electronic systems.