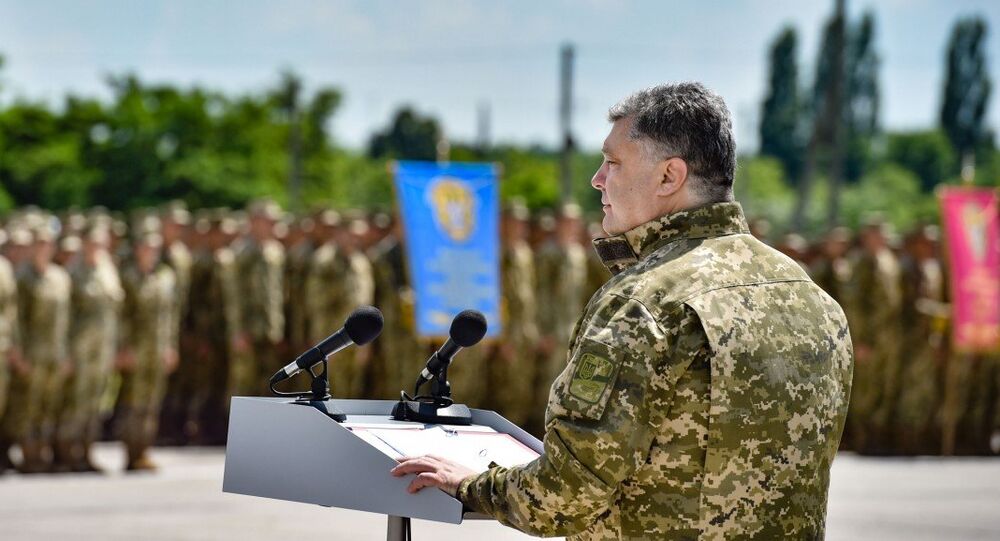 On June 24, speaking at the Kharkiv Air Force University in northeastern Ukraine, President Petro Poroshenko declared that Ukraine was in the process of building up a powerful air force capable of repelling 'Russian aggression.' Commenting on the president's words, Russian military analysts said that the statements were a case of wishful thinking.

Playing to his audience Friday, Poroshenko emphasized that "in its purpose, its firepower and its combat range, Ukraine's military aviation must be a force which, together with other components of the defense forces, will deter the ambitions of the Russian Federation, and be able to strike an adequate blow in response to any aggressor."

© Sputnik / Valeriy Melnikov
Ukrainian Forces Shell Lugansk People’s Republic Militia
Citing defense allocations for 2016, Poroshenko pointed out that "2.5 billion hryvnia [about $100 million USD] has been devoted to the modernization of the Ukrainian Air Force. This will allow the army to repair 35 planes and about 15 helicopters. Half of them will be profoundly modernized."

Commenting on the president's working visit to the school, and to the region, Russian journalist Vasily Vankov suggested that Mr. Poroshenko's head must be up in the clouds, given the fact that "even the outdated Su-27 Flanker fighter aircraft costs $15 million (in old prices)…"

In his article for the independent online newspaper Svobodnaya Pressa, Vankov recalled that just two years ago, "the world was struck with shocking footage as Ukrainian bombers used unguided bombs to strike the peaceful cities of Donetsk and Lugansk."

© Sputnik
Ukraine Looks to US for Anti-Drone Weapons, Radar
At the same time, it's worth noting, Vankov suggested, that in the past two years, Kiev has repeatedly said that it was fighting the regular Russian army, rather than Donbass militia, in eastern Ukraine, with Poroshenko even bragging on past occasions that the military had successfully "stopped the largest army on the continent, and developed a strong [global] coalition."

Commenting on Poroshenko's plans for the modernization of the Ukrainian Air Force, Ivan Konovalov, director of the Center for Analysis of Strategies and Technologies (CAST), told Svobodnaya Pressa that up to this point, the Air Force has demonstrated that is not able to cope even with MANPADS-armed militiamen, let alone the so-called 'Russian threat'.

Moreover, Konovalov recalled, while Russia is on the verge of bringing the T-50 PAK FA fifth generation stealth multirole fighter online, "the Ukrainian Air Force is equipped only with what is left from the Soviet Army. This includes the Su-27, the MiG-29, the Su-24, and the Czech L-39 training aircraft. It should be kept in mind that Kiev also has aircraft from the Antonov State Company (producing military-transport aircraft), but here, over the last two years literally only a handful of pieces have been delivered to the army."

© REUTERS / Ints Kalnins
The New Cold War - NATO Plans 40k Force, Bases on Russia's Border
"For instance, in August 2015, the Ukrainian Air Force received one AN-26 (1969 model year). This aircraft is now in storage; having been repaired. The transfer of military equipment to the Air Force amounts to 1-5 units per month. One can [easily] count how many attack aircraft, helicopters and planes have been received."

Asked about Ukraine's actual potential to counter the Russian Air Force, Konovalov recalled that "in Crimea alone Russia has a whole Aviation Division. This is more than all of the air forces of the Ukraine [combined]. Moreover, Ukrainian equipment consists of clunkers taken out of storage and refurbished…Not to mention the fact that a command structure has yet to be formed for the Air Force."

This, the analyst suggested, is connected "with the general mess" which plagues the country. "A structure has not been established. Accordingly, what kind of Air Force management can we speaking of? As a consequence, there is a lack of any clear understanding as to who should rearm, where the money should be spent."

Asked whether American and other NATO forces could assist their Maidan allies' struggling Air Force, Konovalov emphasized that "this is not possible."

"First off, the alliance's leadership understands very well that any equipment transferred to Ukraine may soon find itself in the hands of the militia. Therefore, NATO supplies only non-lethal equipment, not to mention any sophisticated control systems or fire guidance systems. There is a prominent case, when Kiev received three systems for the detection of artillery fire. One was broken, and the other two were captured by the militia when they took Debaltsevo."

© AP Photo / Evgeniy Maloletka
Military-Industrial Collapse: How Ukraine Sells Its Weapons
In terms of air defense systems, Konovalov admitted that here, things aren't so bad, at least in theory. Kiev "relies on the weapons left over from the Soviet Union. And this is quite an inheritance, including the S-300 missile system. At the very least, they can deliver strikes of some kind. The condition of Ukrainian surface-to-air systems is another story however, considering the quality of their servicing. Moreover, Ukraine sold six S-300 systems, while a portion has broken up or been left to rot. How many combat-ready air defense systems Kiev has left remains a real mystery."

"The fact that they are useless in land battles with the Donetsk and Lugansk People's Republics is another matter. After all, the breakaways have no air forces. I think that Poroshenko was talking about a confrontation with Russian aviation. If that's the case, it's just ridiculous – the Russian Air Force is among the strongest in the world, with only the American and Chinese air forces able to rival ours."

In light of these realities, asked whether Poroshenko was bluffing when speaking about building up the air force to 'deter Russia,' Konovalov said that it wasn't clear what exactly this should be called. "The president of Ukraine discredited himself long ago. Perhaps if he knew what kind of nonsense, quite frankly, he was talking about, and the degree to which he was exposing himself as a laughingstock, he would refrain from such assessments. He doesn't seem to be a fool. So perhaps it's just that, speaking before the Kharkiv Air Force University, his 'post requires' him to say what he did."

Renowned defense analyst Igor Korotchenko holds another view, and suggested that "the latest menacing statements by Mr. Poroshenko, to the effect that he is practically prepared to carry out air strikes on Russia, evokes nothing but feelings of sincere astonishment. The whole of Ukrainian aviation, and its military's equipment as a whole, consists of scrap metal and untrained soldiers. The most they can do is to kill their own citizens in the country's east, and they've been doing so with great success for over two years."

© Photo : Youtube / Danil 003
Shock and Urgh? Ukrainian Military-Complex in a League of Its Own
"As for the Air Force, it does not exist as such," Korotchenko said. "Of course, it's possible to roll out a fighter, to put Poroshenko into the cabin, and take a ride, showing people what a cool commander in chief he is. But from a practical point of view, one cannot say that the Ukrainian Air Force is an organized force."

Ultimately, the analyst suggested, "the potential of the Ukrainian Armed Forces is entirely punitive. We still recall that even poorly trained militia, who took up Kalashnikovs and captured trophy equipment, caused at least two crushing defeats for the Ukrainian army. Today it is the most corrupt, the most mired in poverty military force in Europe…[including] drunken marauders ready to shoot and kill their own people."

Asked what caused the Ukrainian military industrial complex's near-total degradation since the collapse of the USSR, Korotchenko pointed to the break in relations with neighboring Russia. "The Ukrainian military-industrial complex was completely oriented toward Russia. Our country accounted for 90% of deliveries, mainly components, assemblies, motors. Moreover, Ukraine implemented a number of joint programs – including the An-70 military transport aircraft. The breakdown of cooperation has meant the death of the Ukrainian defense industry, because no one [else] needs its products. This agony will last for another 3-5 years," the analyst concluded.