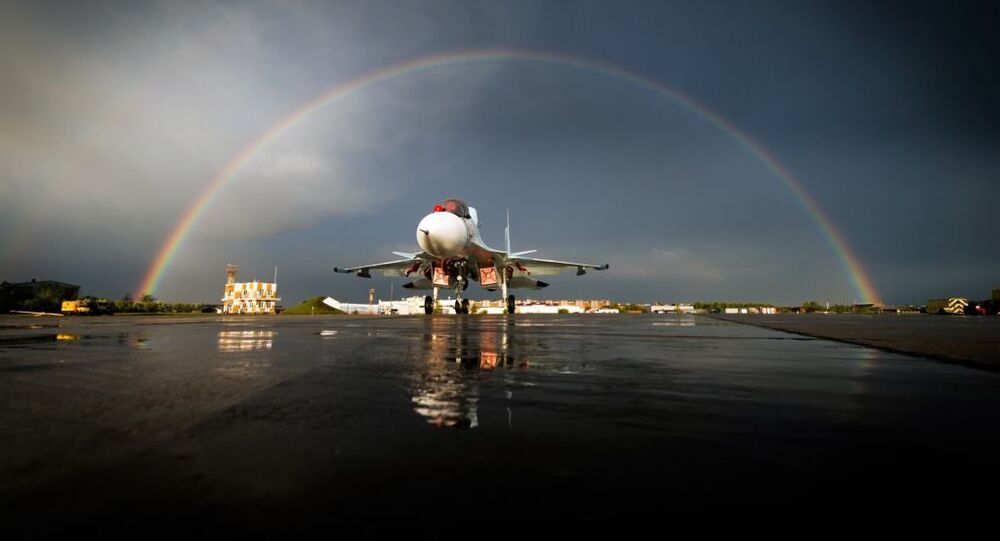 There seems to be nothing that Russia's Sukhoi Su-30SM Flanker-H cannot do. In addition to its main tasks in Syria, the supermaneuverable fighter aircraft helped attack planes that took part in the Moscow-led counterterrorism operation to lock on to ground targets.

"Thanks to their prime sensors, Su-30SMs in Syria assisted our bombers and strike fighters when it came to homing on targets," Sergei Yamanov, production director of the Irkutsk Aviation Plant, said.

© Flickr / poter.simon
Golden Age: Russian Weapons in 'High Demand' Thanks to Syria
This is how it worked. The Su-30SM ascended to safe altitude and illuminated ground targets. Russian attack planes then launched airstrikes.

Yamanov added that the Lockheed Martin F-35 Lightning II and Lockheed Martin F-22 Raptor, the best aircraft in the US arsenal, do not have similar sensors. These planes are capable of engaging targets only when they receive coordinates from external sources, he explained.

The Sukhoi Su-30SM Flanker-H, manufactured by the Irkutsk Aviation Plant, is considered to be a 4+ generation fighter jet. It is outfitted with phased-array radar, thrust vectoring engines and canard panels, as well as advanced high-precision air-to-air and air-to-surface weapons.

The aircraft performed its maiden flight in 2012 and received its baptism of fire in Syria. Initially, the Su-30SM escorted other attack planes as a precaution after Turkey shot a Russian bomber out of Syrian skies. The Su-30SMs were later assigned to bombing missions.

"The multi-role Su-30SM can be deployed in counter-air strikes, counter-land and counter-sea missions. It can conduct electronic counter-countermeasures and early warning tasks. The aircraft also acts as a command-and-control platform within a fleet of combat aircraft performing joint missions," the Airforce Technology website explained.

Fifty-six Su-30SMs are in service with the Russian Air Force and they are expected to receive 30 more aircraft based on the Su-30MK by 2018.