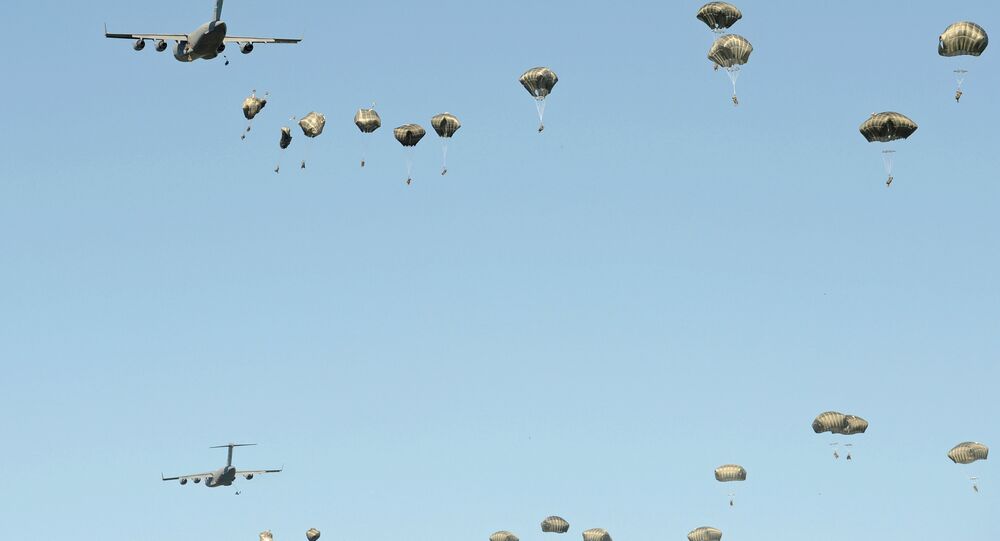 NATO has begun its Anaconda-16 war game, calling for the largest assembly of foreign forces in Poland since World War II.

On Monday, NATO launched its largest war game in decades, near the Russian border, as part of what analysts call the "summer of provocation," a bid to reignite the Cold War intended to force Moscow to starve its domestic economy to ramp up its military to meet a growing external threat.

The war game, titled Anaconda-16, will take place in Poland ahead of next month’s NATO summit in Warsaw, where officials are expected to approve permanent troops to be stationed in the country and throughout eastern Europe, to combat what they consistently refer to 'Russian aggression.'

The 10-day military exercise calls for the participation of some 31,000 NATO troops and thousands of military vehicles, in what will be the single largest movement of foreign forces inside of Poland since World War II, rehashing painful memories for many Russians.

"I think that only an insane person, and only in a dream, can imagine that Russia would suddenly attack NATO," said Putin, adding, "I think some countries are simply taking advantage of people’s fears with regard to Russia."

Regardless of the motives, the escalation of a NATO military presence close to Russian borders has reached a fever pitch, with the US establishing a missile-defense system in Romania and undertaking the development of a separate missile shield in neighboring Poland.

The Obama administration is not alone in its efforts to increase a rhetoric of threat. In recent months Poland has called for an influx of US troops and military aid, citing concerns that Russia may seek to invade. Germany has agreed to dispatch troops into the country for the war game, marking the first time that German soldiers have entered Polish territory since the Nazis used it as a route to invade the Soviet Union.

On Monday, Loud & Clear’s Brian Becker sat down with security analysts Daniel McAdams and John Wight to discuss the latest round of provocations on Russia’s border, and whether NATO war hawks seek more violence.

​What is the purpose of the Anaconda-16 War Game?

"Well this is a series of so many NATO exercises on Russia’s borders during the summer, you can call it the summer of provocation," said McAdams. "This is the largest of the military exercises, and is the largest movement of foreign forces within Poland since World War II, so that is very significant and it is all being sold to everyone else as a protection against Russian aggression."

"In reality, it is NATO troops that are outside of Russia’s borders and it is absolutely a provocation, another step in trying to poke Russia in the eye," explained the security analyst.

Is Poland important to the United States strategically?

"Poland is massively important because of the historical enmity between the Poles and Russia along with the location," explained John Wight. "Daniel is absolutely right in calling this the summer of provocation, what we are witnessing is the recrudescence of the policy of containment that was devised after the Second World War."

"Containment, however, is a bit of a misnomer because it isn’t a policy of containment, it is a policy of aggression designed to surround Russia politically, economically, and ultimately militarily, in order to keep Russia’s government paranoid and to apply pressure on Russia to cause it to implode internally," said Wight, explaining the existential threat that Moscow faces from US-led saber rattling.

Is Russia a counter-hegemonic force against the United States?

"I wouldn’t say that Russia set out to be counter-hegemonic, but certain events have taken place," suggested McAdams. "You know the famous Putin speech where he essentially said ‘We’ve had it, we’ve had enough, and we’ve taken it for a number of years,’ and this was right before Russia accepted Syria’s invitation to put down the jihadists."

"You have people like Victoria Nuland who served Dick Cheney prior to President Obama. What on earth were they thinking by allowing somebody like this to have control of power, somebody who is a member of the Kagan neocon crime family, as the wife to Robert Kagan. This is how the neocons do it and they swallowed the Obama administration like a cancer that keeps growing," stated the security analyst.

"The neoconservatives now have control of Obama’s Russian policy and I think they are pushing us towards World War III," asserted McAdams.